Common Gateway Interface. In brief, an HTTP POST request from the client will send the HTML form data to the CGI program via standard input. 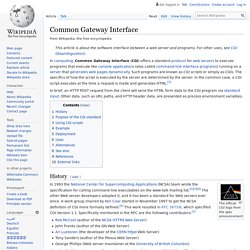 Other data, such as URL paths, and HTTP header data, are presented as process environment variables. History[edit] The official CGI logo from the spec announcement In 1993 the National Center for Supercomputing Applications (NCSA) team wrote the specification for calling command line executables on the www-talk mailing list.[2][3][4] The other Web server developers adopted it, and it has been a standard for Web servers ever since. A work group chaired by Ken Coar started in November 1997 to get the NCSA definition of CGI more formally defined.[5] This work resulted in RFC 3875, which specified CGI Version 1.1. What is PHP? PHP (recursive acronym for PHP: Hypertext Preprocessor) is a widely-used open source general-purpose scripting language that is especially suited for web development and can be embedded into HTML. 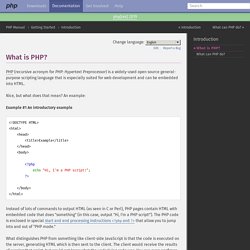 Nice, but what does that mean? An example: Example #1 An introductory example <! DOCTYPE HTML><html> <head> <title>Example</title> </head> <body> Instead of lots of commands to output HTML (as seen in C or Perl), PHP pages contain HTML with embedded code that does "something" (in this case, output "Hi, I'm a PHP script! "). What distinguishes PHP from something like client-side JavaScript is that the code is executed on the server, generating HTML which is then sent to the client. The best things in using PHP are that it is extremely simple for a newcomer, but offers many advanced features for a professional programmer. Although PHP's development is focused on server-side scripting, you can do much more with it. There are no user contributed notes for this page. IEEE 802.1Q. Portions of the network which are VLAN-aware (i.e., IEEE 802.1Q conformant) can include VLAN tags. 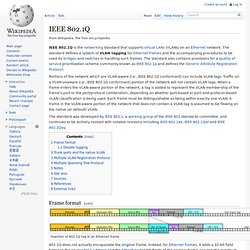 Traffic on a VLAN-unaware (i.e., IEEE 802.1D conformant) portion of the network will not contain VLAN tags. When a frame enters the VLAN-aware portion of the network, a tag is added to represent the VLAN membership of the frame's port or the port/protocol combination, depending on whether port-based or port-and-protocol-based VLAN classification is being used. Each frame must be distinguishable as being within exactly one VLAN. A frame in the VLAN-aware portion of the network that does not contain a VLAN tag is assumed to be flowing on the native (or default) VLAN. The standard was developed by IEEE 802.1, a working group of the IEEE 802 standards committee, and continues to be actively revised with notable revisions including IEEE 802.1ak, IEEE 802.1Qat and IEEE 802.1Qay.

Frame format[edit] Insertion of 802.1Q tag in an Ethernet frame. What is PHP? Domain parking. Domain parking refers to the registration of an internet domain name without that domain being associated with any services such as e-mail or a website. 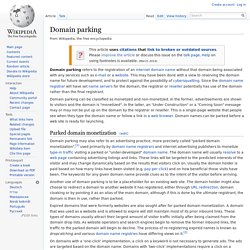 Parked domain monetization[edit] Another use of domain parking is to be a placeholder for an existing web site. Expired domains that were formerly websites are also sought after for parked domain monetization. References[edit] See also[edit] What is multi-tenancy? Multi-tenancy is an architecture in which a single instance of a software application serves multiple customers. 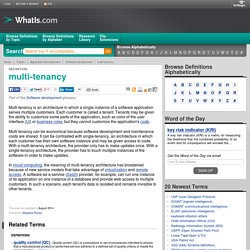 Each customer is called a tenant. Tenants may be given the ability to customize some parts of the application, such as color of the user interface (UI) or business rules, but they cannot customize the application's code. Multi-tenancy can be economical because software development and maintenance costs are shared. It can be contrasted with single-tenancy, an architecture in which each customer has their own software instance and may be given access to code. With a multi-tenancy architecture, the provider only has to make updates once. In cloud computing, the meaning of multi-tenancy architecture has broadened because of new service models that take advantage of virtualization and remote access.