The meaning of conservatism. Over the past couple of years, David Cameron's Tories have sailed under a flag of convenience marked "progressive conservatism". 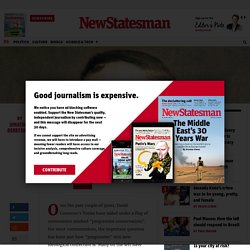 For most commentators, the important question has been just how "progressive" this new ideological confection is. Many on the left have taken it for granted that talk of Cameronian "progress" is just that - talk - and that the Conservatives' commitment to, in their leader's own words, the "progressive end of making British poverty history" is entirely rhetorical. On the right, the intellectual outriders of Cameronism have laboured strenuously to establish its "progressive" bona fides. Few, however, have thought to ask how conservative progressive conservatism is.

Yet it is a question worth asking. The political historian and former Labour MP David Marquand thinks that the left is getting it dangerously wrong in charging Cameron with "crypto-Thatcherism". Five Things We Learned From Theresa May's 2016 Tory Conference Speech. Tim Bale: Memo to May. Don’t forget One Nation, Prime Minister. Tim Bale teaches politics at Queen Mary University of London. 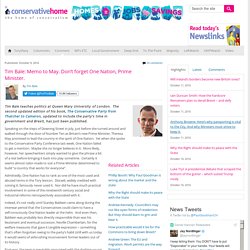 The second updated edition of his book, The Conservative Party from Thatcher to Cameron, updated to include the party’s time in government and Brexit, has just been published. Speaking on the steps of Downing Street in July, just before she turned around and walked through the door of Number Ten as Britain’s new Prime Minister, Theresa May promised to lead the country in the spirit of One Nation. Yet when she spoke to the Conservative Party Conference last week, One Nation failed to get a mention. Maybe she no longer believes in it. More likely, however, her speechwriters simply wanted to give the phrase a bit of a rest before bringing it back into play sometime.

Admittedly, One Nation has to rank as one of the most used and abused terms in the Tory lexicon. Still, it is what it is and we are where we are. Theresa May’s ’red Toryism’: tax justice, statism and attacks on cartel capitalism. Call off the search – as far as many Tories leaving Birmingham were concerned, the spiritual heir to Margaret Thatcher has finally arrived. 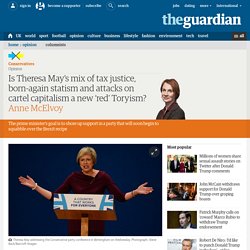 The Conservative party has produced populists who weren’t popular (Iain Duncan Smith, William Hague, Michael Howard) and finally a moderniser popular enough to get elected (David Cameron). Its secret anxiety has been that, throughout its post-Maggie journey, the party has lacked a convincing champion and a leader instinctively in touch with the fears and aspirations of working-class and lower middle-class people outside London. Inside the hall, Theresa May needed to announce Usain Bolt Brexit – as quick as humanly possible – to shore up party support. May’s target outside the hall was a far broader one. She is appealing to a widespread feeling that liberal elites have become complacent about the impact of immigration and globalisation – and she has a point. How Theresa May is redefining conservatism. Sign Up for Our free email newsletters Theresa May, Britain's new prime minister, might just be the most interesting politician in the world right now. 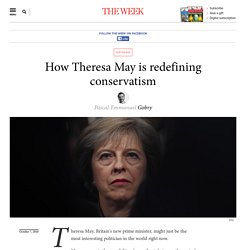 May represents the possibility of a synthesis between the sort of populist politics rearing its head across the West (see: Donald Trump, southern Europe's anti-austerity movements, France's Marine Le Pen, and the Brexit vote) and the elite buy-in that is necessary for populist movements to actually govern. But let's back up. Geoffrey Howe, Margaret Thatcher’s nemesis, dies aged 88. Geoffrey Howe was heralded as one of the greats of the Conservative party and a “quiet hero” of the Thatcher years, after the former chancellor’s death of a suspected heart attack was announced by his family. 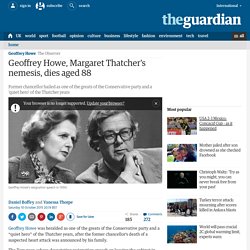 The Tory peer, whose devastating resignation speech on leaving the cabinet in 1990 was widely seen as the central factor in forcing Margaret Thatcher from Downing Street, was 88. His family said he passed away on Friday night at his home in Warwickshire after attending a local jazz concert with his wife, Elspeth, a crossbench peer. Matthew Bailey and Philip Cowley: Thatcherism – not born in Birmingham. Matthew Bailey and Philip Cowley are both from the Centre for British Politics at the University of Nottingham, and ran the twitter account @thatchersrise which charted the events of 1974 and 1975. 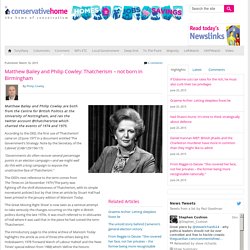 According to the OED, the first use of ‘Thatcherism’ came on 23 June 1977 in a document entitled ‘The Government’s Strategy: Note by the Secretary of the Cabinet’ (CAB/129/196/17): “Governments do often recover several percentage points in an election campaign—and we might well do this with a long campaign to expose the unattractive face of Thatcherism.” Matthew Bailey and Philip Cowley: The conventional wisdom is wrong. As Tory l...

Matthew Bailey and Philip Cowley are both from the Centre for British Politics at the University of Nottingham, and ran @thatchersrise – which charted the events of 1974 and 1975. 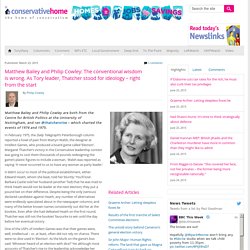 In February 1975, the Daily Telegraph’s Peterborough column reported a howl of pain from Martyn Walsh, the designer at Intellect Games, who produced a board game called ‘Election’. Margaret Thatcher’s victory in the Conservative leadership contest was going to cost them thousands of pounds redesigning the game’s plastic figures to include a woman. Walsh was reported as saying: ‘It never occurred to us to have any woman as party leader.’

It didn’t occur to most of the political establishment, either. Edward Heath, whom she beat, told her bluntly: ‘You’ll lose’.