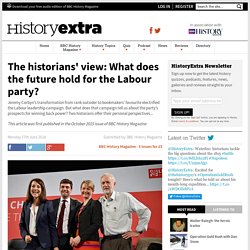 But what does that campaign tell us about the party’s prospects for winning back power? Two historians offer their personal perspectives... This article was first published in the October 2015 issue of BBC History Magazine Monday 27th June 2016 Submitted by: BBC History Magazine Labour leadership candidates Liz Kendall, Andy Burnham, Yvette Cooper and Jeremy Corbyn pictured at a hustings in Glasgow in July 2015.

Brian Brivati: When Labour loses power, it swings left. Labour won a landslide in 1945, then held on narrowly in 1950; when they suffered defeat in 1951, the Bevanites (supporters of Nye Bevan) dominated the post-mortem. When Labour lost in 1970, having won in 1964 and 1966, it adopted one of the most left-wing manifestos in its history. Labour leadership changes have rarely been unpredictable events. Dr Laura Beers: A history of Militant entryism in the Labour Party. The very first article I published as a politics lecturer, over a decade ago, was a reinterpretation of Michael Foot’s handling of the Militant Tendency. 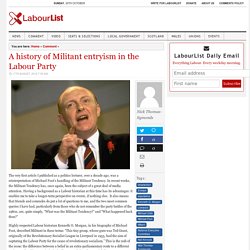 In recent weeks, the Militant Tendency has, once again, been the subject of a great deal of media attention. Having a background as a Labour historian at this time has its advantages: it enables me to take a longer-term perspective on events, if nothing else. It also means that friends and comrades do put a lot of questions to me, and the two most common queries I have had, particularly from those who do not remember the party battles of the 1980s, are, quite simply, “What was the Militant Tendency?” 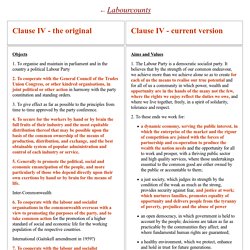 To organise and maintain in parliament and in the country a political Labour Party 2. To cooperate with the General Council of the Trades Union Congress, or other kindred organisations, in joint political or other action in harmony with the party constitution and standing orders. 3. 4. 5. Inter-Commonwealth 6. International (Gaitskell amendment in 1959?) 7. Clause IV: a brief history. Jeremy Corbyn has triggered a fresh debate in the Labour party with comments in an interview in which he appeared to suggest reinstating clause IV of the party’s constitution. 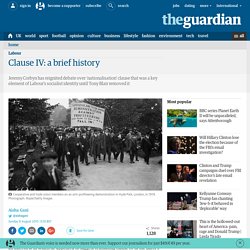 His spokesman subsequently denied the Labour leadership frontrunner wanted a return to “the old clause IV” and that he did not want “a big ‘moment’ such as that”. Debate: Why Blue Labour is a dead end. Adrian Pabst recently argued on this blog that Labour has become disconnected from blue-collar voters, with it’s rhetoric and policy appealing to an increasingly narrow segment of the population. 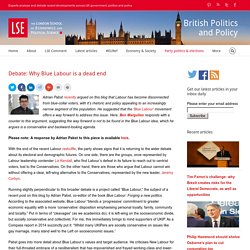 He suggested that the ‘Blue Labour‘ movement offers a way forward to address this issue. Here, Ben Margulies responds with a counter to this argument, suggesting the way forward is not to be found in the Blue Labour idea, which he argues is a conservative and backward-looking agenda. Please note: A response by Adrian Pabst to this piece is available here. With the end of the recent Labour reshuffle, the party shows signs that it is returning to the wider debate about its electoral and demographic futures. On one side, there are the groups, once represented by Labour leadership contender Liz Kendall, who find Labour’s defeat in its failure to reach out to centrist voters, lost to the Conservatives. Pabst goes into more detail about Blue Labour’s values and target audience. Debate: Blue Labour is not a dead end, it’s part of the way forward – a response to Ben Margulies. The future direction and electoral strategy of the Labour Party is currently at the forefront of political discussion in the UK. 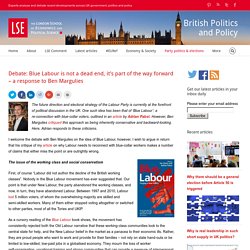 One such idea has been that of ‘Blue Labour’: a re-connection with blue-collar voters, outlined in an article by Adrian Pabst. However, Ben Margulies critiqued this approach as being inherently conservative and backward-looking. Here, Adrian responds to these criticisms. Jeremy Corbyn is no interloper – he is part of Labour’s DNA – New Politics. Geoffrey M. 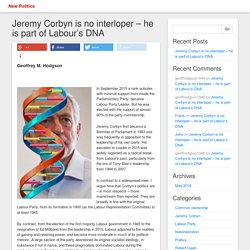 Hodgson. Lord Warner resigns the Labour whip saying the party is 'no longer credible' Labour fiscal charter U-turn sparks backlash - BBC News. Corbyn’s first rebellion. Labour is really two parties. And they simply can’t stand each other. We were wrong, all of us. 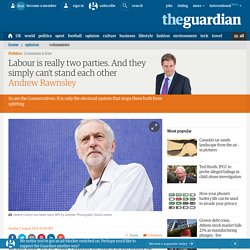 Tories, Labourites and those of us who monitor the political climate, we all thought that the major weather event of the first half of this parliament was going to be the split on the right. When David Cameron returned to Number 10, the tempest everyone prepared for was the Conservative civil war over Europe. Ed Miliband changed the Labour party in a way we don't yet fully appreciate. What’s Ed Miliband’s legacy? 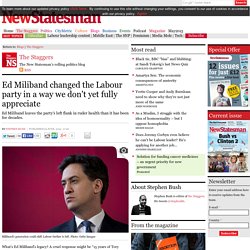 A cruel response might be “15 years of Tory power”. But a more considered answer can be found in this morning’s Guardian. 35 people, among them the head of the TUC, Frances O’Grady, and the economist Ann Pettifor, have signed a letter calling for debt relief for Greece and an end to austerity policies throughout “Europe and across the world”. 26 of them are members of parliament. Just six are from the explicitly anti-austerity parties – although all three Plaid Cymru MPs, and the Greens’ Caroline Lucas are all among the signatories – with the remaining 20 all drawn from the parliamentary Labour party. Of those, 11 were elected under Ed Miliband, ten in the general election of 2015 and one, Liz McInnes, in a by-election in 2014. Why?