If you live in Oregon and would like to vote for my work, here they are: Oregon Book Awards: Readers’ Choice Award “Oh Joy Sex Toy, Volume 2” is a finalist under the “7. Graphic Literature” category.This one comes with a cash prize of an undisclosed amount! Help me make it rain the next time I go to Devil’s Point!!! Also of note, pretty sure my book is the only one that was self-published through crowdfunding, all the other finalists came from traditional publishers with established budgets. Willamette Week’s Best of Portland 2016 In the Personality/Media section, there is a category for Best Local Blog. Thank you so much if you decide to cast a vote my way! Five Geek Social Fallacies. Within the constellation of allied hobbies and subcultures collectively known as geekdom, one finds many social groups bent under a crushing burden of dysfunction, social drama, and general interpersonal wack-ness. 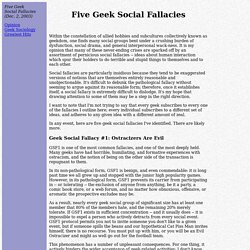 It is my opinion that many of these never-ending crises are sparked off by an assortment of pernicious social fallacies -- ideas about human interaction which spur their holders to do terrible and stupid things to themselves and to each other. Social fallacies are particularly insidious because they tend to be exaggerated versions of notions that are themselves entirely reasonable and unobjectionable.

It's difficult to debunk the pathological fallacy without seeming to argue against its reasonable form; therefore, once it establishes itself, a social fallacy is extremely difficult to dislodge. It's my hope that drawing attention to some of them may be a step in the right direction. In any event, here are five geek social fallacies I've identified. Interactions Consequences. The missing stair. Have you ever been in a house that had something just egregiously wrong with it? 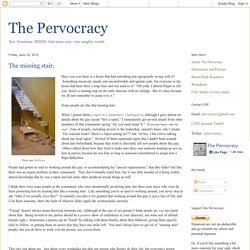 Something massively unsafe and uncomfortable and against code, but everyone in the house had been there a long time and was used to it? "Oh yeah, I almost forgot to tell you, there's a missing step on the unlit staircase with no railings. But it's okay because we all just remember to jump over it. " Some people are like that missing stair. When I posted about a rapist in a community I belonged to, although I gave almost no details about the guy except "he's a rapist," I immediately got several emails from other members of that community saying "oh, you must mean X.

" People had gotten so used to working around this guy, to accommodating his "special requirements," that they didn't feel like there was an urgent problem in their community. "Fixing" doesn't always mean throwing someone out. This isn't just about sex. I know not all these people can be fixed, and sometimes they can't be escaped either. Reader Question #4: My friend is dating someone terrible, or, Secrets of The Darth Vader Boyfriend. Do not date this man. 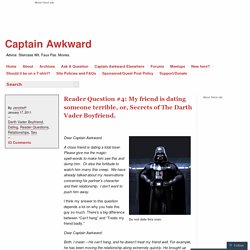 Dear Captain Awkward: A close friend is dating a total loser. Please give me the magic-spell-words to make him see this and dump him. Or else the fortitude to watch him marry this creep. We have already talked about my reservations concerning his partner’s character and their relationship. I think my answer to this question depends a lot on why you hate this guy so much. Both. He is very socially awkward and will often blurt out hurtful and insulting things at social gatherings that are later explained away as “jokes.” I’ve told my friend what I think, and he always has an explanation for everything this guy does. I think the biggest red flag is that this guy doesn’t seem to have any other friends. 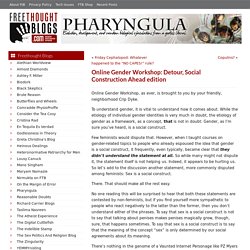 To understand gender, it is vital to understand how it comes about. While the etiology of individual gender identities is very much in doubt, the etiology of gender as a framework, as a concept, that is not in doubt: Gender, as I’m sure you’ve heard, is a social construct. Few feminists would dispute that. However, when I taught courses on gender-related topics to people who already espoused the idea that gender is a social construct, it frequently, even typically, became clear that they didn’t understand the statement at all.

So while many might not dispute it, the statement itself is not helping us. There. No one reading this will be surprised to hear that both these statements are contested by non-feminists, but if you find yourself more sympathetic to people who react negatively to the latter than the former, then you don’t understand either of the phrases. We choose.