Abstruse. Aesthete. Bagatelle. Barratry. Define blunderbuss. Calumniate. Define capricious. Dais - Wikipedia. Queen Elizabeth II standing on a dais while reviewing a parade in 1946 A dais or daïs (/ˈdeɪ.əs/ or /ˈdaɪ.əs/)[1] is any raised platform located either inside or outside a room or enclosure, often for dignified occupancy, as at the front of a lecture hall or sanctuary. 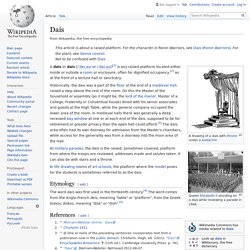 Historically, the dais was a part of the floor at the end of a medieval Hall, raised a step above the rest of the room. On this the Master of the household or assembly (as it might be, the lord of the manor, Master of a College, Fraternity or Conventual house) dined with his senior associates and guests at the High Table, while the general company occupied the lower area of the room. At military parades, the dais is the raised, sometimes covered, platform from where the troops are reviewed, addresses made and salutes taken. It can also be with stairs and a throne. Defenestrate. Depredations. Desultory. Doughface. The term doughface originally referred to an actual mask made of dough, but came to be used in a disparaging context for someone, especially a politician, who is perceived to be pliable and moldable.[1] In the 1847 Webster's dictionary doughfacism was defined as "the willingness to be led about by one of stronger mind and will. 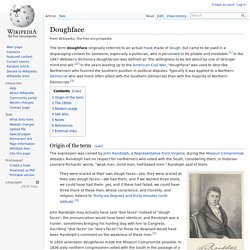 "[2] In the years leading up to the American Civil War, "doughface" was used to describe Northerners who favored the Southern position in political disputes. Typically it was applied to a Northern Democrat who was more often allied with the Southern Democrats than with the majority of Northern Democrats.[3] Ebullient. Define eldritch. Emesis. Ennui - Recherche Google. Epimeleia - New Testament Greek Lexicon - New American Standard. Erudite. Etiolated. Execrable. 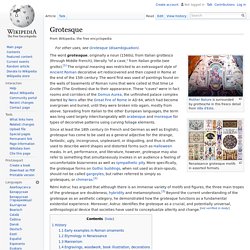 Rémi Astruc has argued that although there is an immense variety of motifs and figures, the three main tropes of the grotesque are doubleness, hybridity and metamorphosis.[3] Beyond the current understanding of the grotesque as an aesthetic category, he demonstrated how the grotesque functions as a fundamental existential experience. Moreover, Astruc identifies the grotesque as a crucial, and potentially universal, anthropological device that societies have used to conceptualize alterity and change.

[not verified in body] History[edit] Early examples in Roman ornaments[edit] When Nero's palace in Rome, the Domus Aurea, was inadvertently rediscovered in the late 15th century, buried in fifteen hundred years of fill, the first breakthrough was from above, so that those keen to see the rooms had to be lowered down into them on ropes, completing their resemblance to caves, or grottoes in Italian. Hoary - Buscar con Google. Hoi polloi. Iatrogenic. Define immure. Define imperious. Inchoate. Define ineluctable. Invidious. Kakistocracy. English[edit] Etymology[edit] Ancient Greek κάκιστος (kakistos, “worst”), superlative of κακος (kakos, “bad”) + -κρατια (-kratia, “power, rule, government”). 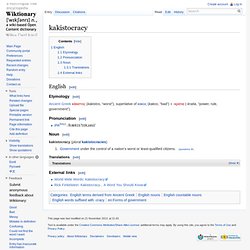 Pronunciation[edit] IPA(key): /kækɪsˈtɑkɹəsi/ Noun[edit] kakistocracy (plural kakistocracies) Kitsch. Art or other objects that appeal to popular rather than high art tastes Puppy by Jeff Koons (2010) is a self-aware display of kitsch, specifically as a combination of opulence and cuteness. 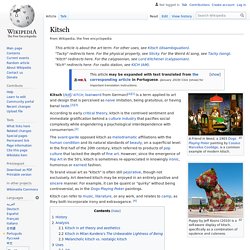 According to early critical theory, kitsch is the contrived sentiment and immediate gratification behind a culture industry that pacifies social complexity while engendering a psychological interdependence with consumerism.[2] To brand visual art as "kitsch" is often still pejorative, though not exclusively. Art deemed kitsch may be enjoyed in an entirely positive and sincere manner. For example, it can be quaint or "quirky" without being controversial, as in the Dogs Playing Poker paintings. 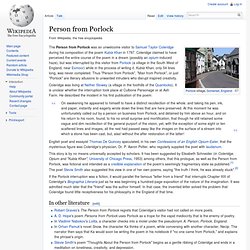 Coleridge claimed to have perceived the entire course of the poem in a dream (possibly an opium-induced haze), but was interrupted by this visitor from Porlock (a village in the South West of England, near Exmoor) while in the process of writing it. Kubla Khan, only 54 lines long, was never completed. Thus "Person from Porlock", "Man from Porlock", or just "Porlock" are literary allusions to unwanted intruders who disrupt inspired creativity. Coleridge was living at Nether Stowey (a village in the foothills of the Quantocks). It is unclear whether the interruption took place at Culbone Parsonage or at Ash Farm. English poet and essayist Thomas De Quincey speculated, in his own Confessions of an English Opium-Eater, that the mysterious figure was Coleridge's physician, Dr. This story is by no means universally accepted by scholars. Poka-yoke. Usage[edit] More broadly, the term can refer to any behavior-shaping constraint designed into a process to prevent incorrect operation by the user. 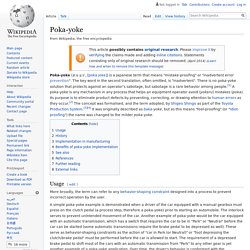 A simple poka-yoke example is demonstrated when a driver of the car equipped with a manual gearbox must press on the clutch pedal (a process step, therefore a poka-yoke) prior to starting an automobile. The interlock serves to prevent unintended movement of the car. Potemkin village. Prevaricate. Pugnacious. Quotidian. Reify. Salutary - Recherche Google. Sanguine. Define sartorial. Skeuomorph. Shibboleth.

Sylvan. Teleology - Recherche Google. Define temporize. Define timorous. Truncheon. Usufruct. Vapid. Vitiate. Vituperation. Define zaftig. Philology. Synecdoche. A synecdoche (/sɪˈnɛkdəkiː/, si-NEK-də-kee; from Greek synekdoche (συνεκδοχή), meaning "simultaneous understanding") is a figure of speech[1][2] in which a term for a part of something refers to the whole of something, or vice-versa.[3][4] An example is referring to workers as hired hands.[5][6] Similar figures of speech[edit] Synecdoche is a rhetorical trope and a type of figurative speech[7] similar to metonymy—a figure of speech in which a term that denotes one thing is used to refer to a related thing.[1] Indeed, synecdoche is sometimes considered a subclass of metonymy. 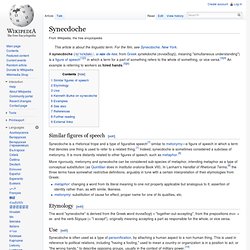 It is more distantly related to other figures of speech, such as metaphor.[8] Etymology of the word currency. Article 730 - CPL - Mental Disease or Defect Excluding Fitness to Proceed.