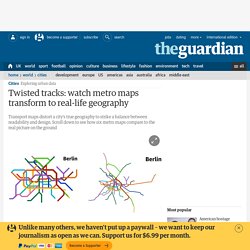 To that end, they necessarily distort the city’s true geography and with it, our own mental conception of the city too. But just how distorted are the world’s metro maps? A recent series of animated graphics, created by the DIY cartographers of the online forum Reddit, answers that question. Scroll down to see the metro maps of six global cities transform to match their true geography. London. On shared false memories: what lies behind the Mandela effect. Would you trust a memory that felt as real as all your other memories, and if other people confirmed that they remembered it too? 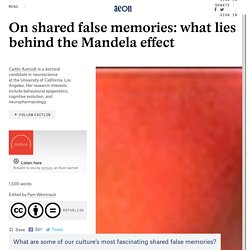 The Power of Memory in the Civil-Rights Movement. ASPEN, Colo. 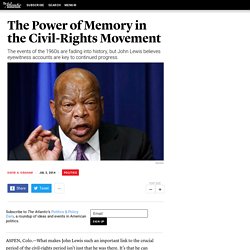 —What makes John Lewis such an important link to the crucial period of the civil-rights period isn’t just that he was there. It’s that he can conjure dates, faces, and details from those experiences with such impressive command. The longtime Georgia Democratic member of Congress demonstrated a little of that Wednesday at the Aspen Ideas Festival, which is hosted by The Atlantic and the Aspen Institute. He spoke about the powerful feeling he got the first time he met Martin Luther King, when Lewis was still a teenager: “To be in his presence, to be able to talk with him, just made me feel stronger and more daring.”

He remembered exactly what was said in the moments before Alabama State Troopers attacked the peaceful marchers on the Edmund Pettus Bridge in Selma: Hosea Williams asked Officer John Cloud for a moment to pray, but the mass of troopers attacked instead. Memory and Forgetting. Future - The mystery of why you can't remember being a baby. You’re out to lunch with someone you’ve known for a few years. 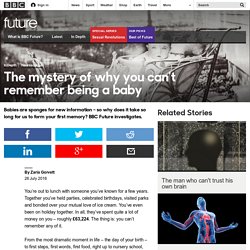 Together you’ve held parties, celebrated birthdays, visited parks and bonded over your mutual love of ice cream. You’ve even been on holiday together. In all, they’ve spent quite a lot of money on you – roughly £63,224. The Reason You’re Positive You Remember Something That Never Happened. It seems that everyone is susceptible to the phenomenon of “memory distortion,” or the creation of false memories. 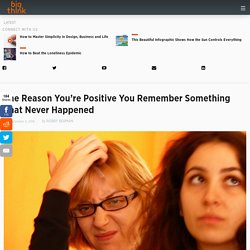 Researchers think they may be starting to understand how false memories occur: They’re the product of a kind of shorthand your brain uses to store memories efficiently. By false memories, we’re talking about things we clearly recall happening that never actually did. It can be an event you think you attended, or some detail you incorrectly recall, and it happens even to those with amazingly good powers of recall.

In one 2013 study at the University of California, Irvine, two groups of subjects were assembled, those with normal memories and another group of people with “highly superior autobiographical memory” (HSAM). These are people with uncanny memories who remember dates and event associations way beyond most of us. The researchers used the Deese–Roediger–McDermott (DRM) paradigm. Temporal poles (DATABASE CETER FOR LIFE SCIENCE) Everything in its place. How memory plays us: Elizabeth Loftus at TEDxOrangeCoast.

Eyewitness Testimony. By Saul McLeod published 2009 Eyewitness testimony is a legal term. It refers to an account given by people of an event they have witnessed. For example they may be required to give a description at a trail of a robbery or a road accident someone has seen. This includes identification of perpetrators, details of the crime scene etc. Eyewitness testimony is an important area of research in cognitive psychology and human memory. Juries tend to pay close attention to eyewitness testimony and generally find it a reliable source of information. Anxiety / StressReconstructive MemoryWeapon FocusLeading Questions (Loftus and Palmer, 1974) Anxiety / Stress.

Memory and stress. The Economist: Memory is not History. IT IS lunchtime and the Museum of Memory in Santiago has a sprinkling of visitors. 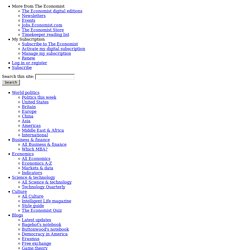 They contemplate the exhibits in silence. There is grainy footage of Hawker jets bombing the Moneda palace during General Augusto Pinochet’s coup against Salvador Allende, an elected Socialist president, on September 11th 1973. A map of Chile shows the 1,132 detention centres set up after the coup, each marked with a flashing light. In videotaped testimony, victims matter-of-factly describe the torture and sexual violence to which they were subjected.

There are heartbreaking letters to imprisoned parents from their children and to families from prisoners unaware of their imminent execution. No democrat can fail to be moved by the museum. How We Make Memories - Crash Course Psychology #13. Are search engines and the Internet hurting human memory? The following is excerpted from Clive Thompson’s book Smarter Than You Think: How Technology Is Changing Our Minds for the Better, out now from the Penguin Press. 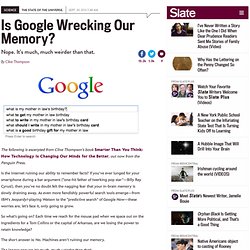 Is the Internet ruining our ability to remember facts? If you’ve ever lunged for your smartphone during a bar argument (“one-hit father of twerking pop star”—Billy Ray Cyrus!) , then you’ve no doubt felt the nagging fear that your in-brain memory is slowly draining away. As even more fiendishly powerful search tools emerge—from IBM’s Jeopardy! -playing Watson to the “predictive search” of Google Now—these worries are, let’s face it, only going to grow. So what’s going on? The short answer is: No.