Bad Memories Stick Better Than Good. We remember the bad times better than the good because our emotions influence how we process memories, a new review of research shows. 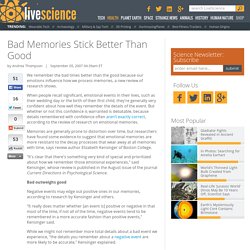 When people recall significant, emotional events in their lives, such as their wedding day or the birth of their first child, they're generally very confident about how well they remember the details of the event. But whether or not this confidence is warranted is debatable, because details remembered with confidence often aren’t exactly correct, according to the review of research on emotional memories. Memories are generally prone to distortion over time, but researchers have found some evidence to suggest that emotional memories are more resistant to the decay processes that wear away at all memories with time, says review author Elizabeth Kensinger of Boston College. 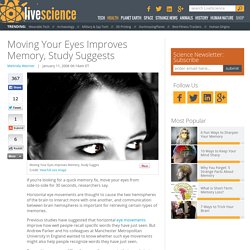 Horizontal eye movements are thought to cause the two hemispheres of the brain to interact more with one another, and communication between brain hemispheres is important for retrieving certain types of memories. Previous studies have suggested that horizontal eye movements improve how well people recall specific words they have just seen. But Andrew Parker and his colleagues at Manchester Metropolitan University in England wanted to know whether such eye movements might also help people recognize words they have just seen. Recognition memory differs from recall memory in that people trying to recognize words tend to make false memory errors called source monitoring errors.

Can Bad Memories Be Erased? Many people think of memory like a video, as if it were a perfect record of events to be replayed over and over again in the mind. 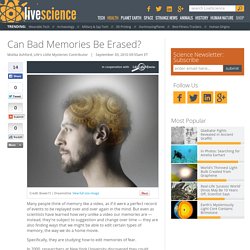 But even as scientists have learned how very unlike a video our memories are — instead, they're subject to suggestion and change over time — they are also finding ways that we might be able to edit certain types of memory, the way we do a home movie. Specifically, they are studying how to edit memories of fear. In 2000, researchers at New York University discovered they could erase a fear-filled memory in rats by shocking them, and then reminding them of the fearful shock while treating them with a chemical that inhibits the creation of proteins in the brain .

The theory behind this and other experiments on animals is that a memory requires the creation of proteins when it first forms in the brain (a process called consolidation), and creates those proteins again every time it's recalled (reconsolidation). New Drug Deletes Bad Memories. Do you have a really bad memory, or past heartache, that you would prefer to forget? 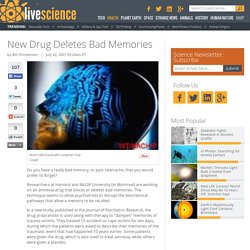 Researchers at Harvard and McGill University (in Montreal) are working on an amnesia drug that blocks or deletes bad memories. The technique seems to allow psychiatrists to disrupt the biochemical pathways that allow a memory to be recalled. How to Suppress Bad Memories. Scientists have uncovered a two-step process by which our brains can supposedly suppress emotional memories. 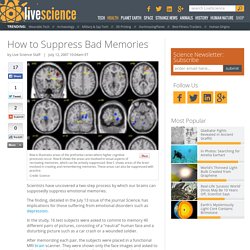 The finding, detailed in the July 13 issue of the journal Science, has implications for those suffering from emotional disorders such as depression. In the study, 16 test subjects were asked to commit to memory 40 different pairs of pictures, consisting of a “neutral” human face and a disturbing picture such as a car crash or a wounded soldier. Erasing Bad Memories: Wiping Out Unconscious Traces Is Possible. Bad memories are not only part of our conscious mind, they also leave a trace in our unconscious. 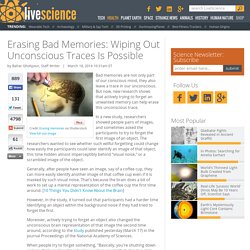 But now, new research shows that actively trying to forget an unwanted memory can help erase this unconscious trace. In a new study, researchers showed people pairs of images, and sometimes asked the participants to try to forget the first image of an object. The researchers wanted to see whether such willful forgetting could change how easily the participants could later identify an image of that object, this time hidden almost imperceptibly behind "visual noise," or a scrambled image of the object. What Would Happen If You Put Your Hand in the LHC Beam? In this weekly series, Life's Little Mysteries provides expert answers to challenging questions. 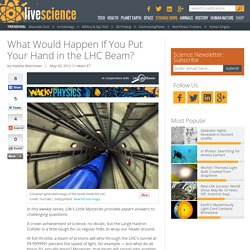 A crown achievement of science, no doubt, but the Large Hadron Collider is a little tough for us regular folks to wrap our heads around. At full throttle, a beam of protons will whiz through the LHC's tunnel at 99.9999991 percent the speed of light, for example — but what do all those 9's actually mean? Memory Definition & Types of Memory. For us to recall events, facts or processes, we have to commit them to memory. 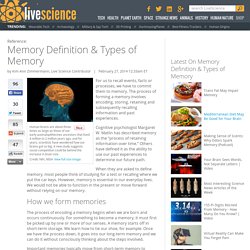 The process of forming a memory involves encoding, storing, retaining and subsequently recalling information and past experiences. Cognitive psychologist Margaret W. Matlin has described memory as the “process of retaining information over time.” Others have defined it as the ability to use our past experiences to determine our future path. When they are asked to define memory, most people think of studying for a test or recalling where we put the car keys. Late-Night Meals May Interfere with Memory, Research Suggests. The hectic pace of modern life means that people are often eating at odd times of the day and night, and these shifted schedules could be taking a toll on memory, new research suggests. 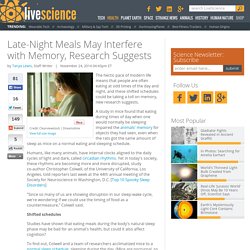 A study in mice found that eating during times of day when one would normally be sleeping impaired the animals' memory for objects they had seen, even when the rats got the same amount of sleep as mice on a normal eating and sleeping schedule. Humans, like many animals, have internal clocks aligned to the daily cycles of light and dark, called circadian rhythms. Yet in today's society, these rhythms are becoming more and more disrupted, study co-author Christopher Colwell, of the University of California, Los Angeles, told reporters last week at the 44th annual meeting of the Society for Neuroscience in Washington, D.C. [Top 10 Spooky Sleep Disorders] "Since so many of us are showing disruption in our sleep-wake cycle, we're wondering if we could use the timing of food as a countermeasure," Colwell said.

Why Painful Memories Linger. Memories of traumatic events can be hard to shake, and now scientists say they understand why. 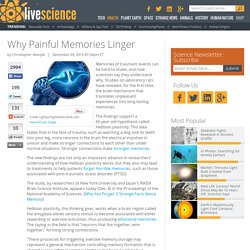 Studies on laboratory rats have revealed, for the first time, the brain mechanism that translates unpleasant experiences into long-lasting memories. The findings support a 65-year-old hypothesis called Hebbian plasticity. This idea states that in the face of trauma, such as watching a dog sink its teeth into your leg, more neurons in the brain fire electrical impulses in unison and make stronger connections to each other than under normal situations. Imagination and Reality Look Different in the Brain. "Turn off your mind, relax, and float down stream... " Maybe John Lennon was onto something when he wrote those words for the Beatles' song "Tomorrow Never Knows. " It turns out that that reality and imagination flow in different directions in the brain, researchers say.

The visual information from real events that the eyes see flows "up" from the brain's occipital lobe to the parietal lobe, but imagined images flow "down" from the parietal to the occipital. "There seems to be a lot in our brains and animal brains that is directional — that neural signals move in a particular direction, then stop, and start somewhere else," said Dr. Giulio Tononi, a psychiatry professor and neuroscientist at the University of Wisconsin-Madison and one of the study's co-authors. Eyewitness Testimony is Far From Perfect. This article was originally published on The Conversation. The publication contributed this article to Live Science's Expert Voices: Op-Ed & Insights. Twenty eyewitnesses testified before the grand jury investigating the police shooting of Michael Brown in Ferguson, Missouri.

None of these accounts is fully consistent with any other. Semantic Memory: Definition & Examples. Semantic memory refers to a portion of long-term memory that processes ideas and concepts that are not drawn from personal experience. Semantic memory includes things that are common knowledge, such as the names of colors, the sounds of letters, the capitals of countries and other basic facts acquired over a lifetime. The concept of semantic memory is fairly new. It was introduced in 1972 as the result of collaboration between Endel Tulving of the University of Toronto and Wayne Donaldson of the University of New Brunswick on the impact of organization in human memory.

Tulving outlined the separate systems of conceptualization of episodic and semantic memory in his book, "Elements of Episodic Memory. "