Sulfated proteoglycans. Sulfated polysaccharide. Sulfated lipids. Cadherins. Lens of Time: Velvet Worms—Secret of the Slime. Mesoglea. Mesoglea, also known as mesohyl, is the translucent, non-living, jelly-like substance found between the two epithelial cell layers (i.e., between the ectoderm and endoderm) in the bodies of cnidarians and sponges. 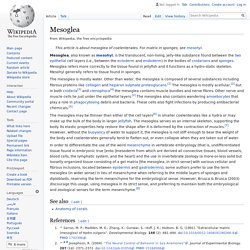 Mesoglea refers more correctly to the tissue found in jellyfish and it functions as a hydro-static skeleton. Mesohyl generally refers to tissue found in sponges. The mesoglea is mostly water. Other than water, the mesoglea is composed of several substances including fibrous proteins like collagen and heparan sulphate proteoglycans.[1] The mesoglea is mostly acellular,[2] but in both cnidaria[3] and ctenophora[4] the mesoglea contains muscle bundles and nerve fibres. Other nerve and muscle cells lie just under the epithelial layers.[2] The mesoglea also contains wandering amoebocytes that play a role in phagocytosing debris and bacteria. See also[edit] Anatomy of corals References[edit] Jump up ^ Sarras, M. Mesohyl. The mesohyl includes a noncellular colloidal mesoglea with embedded collagen fibers, spicules and various cells, being as such a type of mesenchyme.[1] References[edit] Jump up ^ Brusca, R.C. 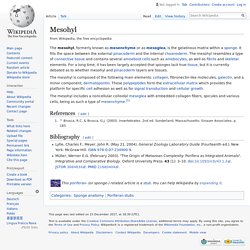 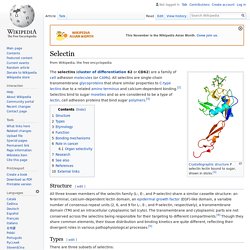 The transmembrane and cytoplasmic parts are not conserved across the selectins being responsible for their targeting to different compartments.[4] Though they share common elements, their tissue distribution and binding kinetics are quite different, reflecting their divergent roles in various pathophysiological processes.[5] Intermediate filament. Structure of intermediate filament Intermediate filaments (IFs) are cytoskeletal components found in the cells of vertebrate animal species,[1][2] and perhaps also in other animals, fungi, plants, and unicellular organisms.[3] They are composed of a family of related proteins sharing common structural and sequence features. 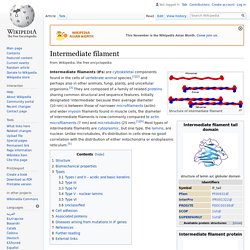 Initially designated 'intermediate' because their average diameter (10 nm) is between those of narrower microfilaments (actin) and wider myosin filaments found in muscle cells, the diameter of Intermediate filaments is now commonly compared to actin microfilaments (7 nm) and microtubules (25 nm).[1][4] Most types of intermediate filaments are cytoplasmic, but one type, the lamins, are nuclear. Unlike microtubules, IFs distribution in cells show no good correlation with the distribution of either mitochondria or endoplasmic reticulum.[5] Structure[edit] Part of the assembly process includes a compaction step, in which ULF tighten and assume a smaller diameter.

Lamins. Fibronectin - Recherche Google. About this page Our systems have detected unusual traffic from your computer network. 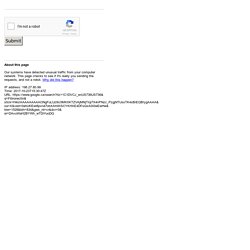 This page checks to see if it's really you sending the requests, and not a robot. Why did this happen? This page appears when Google automatically detects requests coming from your computer network which appear to be in violation of the Terms of Service. The block will expire shortly after those requests stop. This traffic may have been sent by malicious software, a browser plug-in, or a script that sends automated requests. Sometimes you may be asked to solve the CAPTCHA if you are using advanced terms that robots are known to use, or sending requests very quickly. IP address: 198.27.80.99Time: 2017-10-23T15:30:47ZURL: Laminin. An Illustration of the Laminin-111 complex depicting the domain organization Laminins are high-molecular weight (~400 to ~900 kDa) proteins of the extracellular matrix. 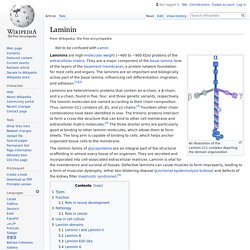 They are a major component of the basal lamina (one of the layers of the basement membrane), a protein network foundation for most cells and organs. The laminins are an important and biologically active part of the basal lamina, influencing cell differentiation, migration, and adhesion.[1][2] UNC-5. Discovery of netrins[edit] The term netrin was first used in a study done in 1990 in Caenorhabditis elegans and was called UNC-6.[2] Studies performed on rodents in 1994 have determined that netrins are vital to guidance cues. 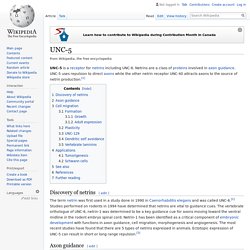 The vertebrate orthologue of UNC-6, netrin-1 was determined to be a key guidance cue for axons moving toward the ventral midline in the rodent embryo spinal cord. Thrombospondin 1. Thrombospondin 1, abbreviated as THBS1, is a protein that in humans is encoded by the THBS1 gene.[5][6] 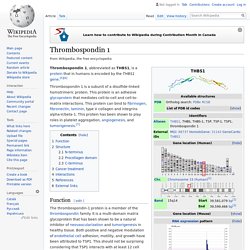 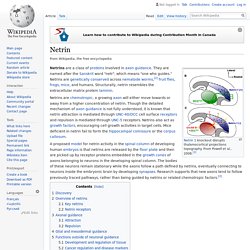 From Powell et al., 2008.[1] Netrins are a class of proteins involved in axon guidance. They are named after the Sanskrit word "netr", which means "one who guides. " Netrins are genetically conserved across nematode worms,[2] fruit flies, frogs, mice, and humans. Structurally, netrin resembles the extracellular matrix protein laminin. Netrins are chemotropic; a growing axon will either move towards or away from a higher concentration of netrin. A proposed model for netrin activity in the spinal column of developing human embryos is that netrins are released by the floor plate and then are picked up by receptor proteins embedded in the growth cones of axons belonging to neurons in the developing spinal column.

Agrin - Wikipedia. Agrin is a large proteoglycan whose best-characterised role is in the development of the neuromuscular junction during embryogenesis. 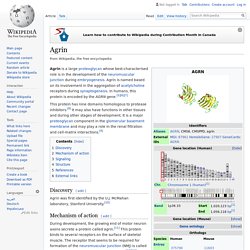 Agrin is named based on its involvement in the aggregation of acetylcholine receptors during synaptogenesis. In humans, this protein is encoded by the AGRN gene.[5][6][7] One microbe’s trash, another microbe’s treasure. Microbially digested mucus provides nutrients for a pathogen Written by: Katherine Kelly Edited by: Katherine Hill, Claudia Althoen, Madeline Nicol, Grace Owens-Kurtz Mucus. This word conjures up distinct feelings and sensations, and likely a strong sense of disgust. As someone recovering from a recent cold, I have been once again intimately acquainted with this interesting bodily secretion.

Mucus is a component of our innate immune system, otherwise known as our first line of defense. Mucus. Pannexin - Wikipedia. Pannexins (from Greek 'παν' — all, and from Latin 'nexus' — connection) are a family of vertebrate proteins identified by their homology to the invertebrate innexins.[1] While innexins are responsible for forming gap junctions in invertebrates, the pannexins have been shown to predominantly exist as large transmembrane channels connecting the intracellular and extracellular space, allowing the passage of ions and small molecules between these compartments (such as ATP and sulforhodamine B). Three pannexins have been described in Chordates: Panx1, Panx2 and Panx3.[2] Function[edit] Pannexin 1 has been shown to be involved in early stages of innate immunity through an interaction with the P2X7 purinergic receptor.

Connexin - Wikipedia. Connexins (Cx) (TC# 1.A.24), or gap junction proteins, are structurally related transmembrane proteins that assemble to form vertebrate gap junctions. An entirely different family of proteins, the innexins, form gap junctions in invertebrates.[1] Each gap junction is composed of two hemichannels, or connexons, which consist of homo- or heterohexameric arrays of connexins, and the connexon in one plasma membrane docks end-to-end with a connexon in the membrane of a closely opposed cell. The hemichannel is made of six connexin subunits which are themselves each constructed out of six connexin molecules[clarification needed].

Gap junctions are essential for many physiological processes, such as the coordinated depolarization of cardiac muscle, proper embryonic development, and the conducted response in microvasculature. For this reason, mutations in connexin-encoding genes can lead to functional and developmental abnormalities. Innexin - Wikipedia. Innexins are transmembrane proteins that form gap junctions in invertebrates. Gap junctions are composed of membrane proteins that form a channel permeable to ions and small molecules connecting the cytoplasm of adjacent cells. Although gap junctions provide similar functions in all multicellular organisms, it was not known what proteins invertebrates used for this purpose until the late 1990s. While the connexin family of gap junction proteins was well-characterized in vertebrates, no homologues were found in non-chordates. Discovery[edit] Structure[edit] Innexins have four transmembrane segments (TMSs) and, like the vertebrate connexin gap junction protein, six innexin subunits together form a channel (an "innexon") in the plasma membrane of the cell.[5] Two innexons in apposed plasma membranes can form a gap junction.

Vinnexins, viral homologues of innexins, were identified in polydnaviruses that occur in obligate symbiotic associations with parasitoid wasps. Pannexin1 and Pannexin2 Channels Show Quaternary Similarities to Connexons an... Sea pansies. The Tale of a New Phylum That Really Wasn’t. In 1986, a group of scientists from Australia and New Zealand described, in the one of the highest profile scientific journals, the existence of a new class of organisms. During examination of echinoderms from sunken wood collected from depths between 1,057 and 1,208 m off the New Zealand coast, we discovered nine specimens of a small flattened discoidal invertebrate. These animals, briefly described here, superficially resemble a cnidarian medusa, but their pentamerous morphology is distinctly echinoderm-like. We consider that the features of these newly discovered echinoderms warrant the recognition of a new class.

Xyloplax medmiformis n.gen. and n.sp. represents a radical departure in morphology from any other known extant echinoderm. Its obvious tube feet, clearly pentamerous body pattern, and calcite skeleton leave no doubt that the animal is an echinoderm. The authors describe Xyloplax, a bizarre looking echinoderm. And herein lies the problem. Dr. Antho-RFamide-containing neurons in the primitive nervous system of the anthozoanRenilla koellikeri. Anatomy. Www.bryozoans.nl - Anatomy Nederlands. Anatomy. Neuromelanin - Wikipedia. 5,6-dihydroxyindole, the monomer out of which neuromelanin polymers are formed. Neuromelanin (NM) is a dark pigment found in the brain which is structurally related to melanin. L-DOPA - Wikipedia. Max Planck Institute of Colloids and Interfaces. Glial fibrillary acidic protein - Wikipedia. Glial fibrillary acidic protein (GFAP) is a protein that is encoded by the GFAP gene in humans.[5] ASCL1 - Wikipedia. Mesenchyme - Wikipedia.

NG2 proteoglycan - Wikipedia. NG2, or neural/glial antigen 2, is a rat integral membrane proteoglycan found in the plasma membrane of many diverse cell types.[1] Homologous proteins in other species include human CSPG4, also known as melanoma-associated chondroitin sulfate proteoglycan (MCSP), Mouse AN2, and Sea urchin ECM3.[2] This single-pass transmembrane molecule may be plasma membrane-bound or secreted and associated with the extracellular matrix.[3] It is believed to play a role in functions such as cell adhesion, cell-cell and cell-ECM communication, migration and metastasis, proliferation, and axonal growth, guidance and regeneration. NG2-positive cells include oligodendrocyte progenitor cells (OPCs) and other progenitor cell populations, such as chondroblasts, myoblasts, and pericytes, as well as several different tumors including glioblastoma multiforme and melanoma.[4][5][6][7][8][9][10]