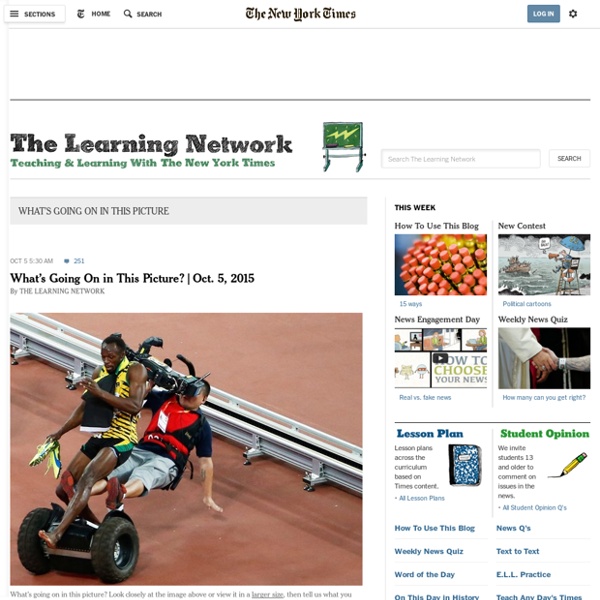 Images of Science Photo Credit: Science NetLinks Purpose To understand the diversity of the scientific enterprise. Context The lesson provides several activities that can be done in a series or individually to help students understand the diversity of science, both in terms of the work and the people engaged in the work. Extreme Photo of the Week Photograph by Mike Schirf “I love the skiing down the best, but I don't love the skinning up,” says 11-year-old Lilliana Libecki, seen here with her dad, Mike, on their recent sailing-skiing expedition to the Antarctic Peninsula in front of Paradise Bay and a colony of Gentoo penguins. It was Lilliana’s very first expedition with her dad, a National Geographic Adventurer of the Year, Expeditions Council grantee, and veteran of 50-some remote expeditions. “I will never ever forget the skiing and icebergs and how curious and unafraid the penguins were,” Liliana says. “It was so marvelous.”

Immigrant earnings ‘a failure’ - Göteborg Daily Refugees and other immigrant groups are finding it hard to establish themselves in the labour market, even after 10 years in Sweden, suggests a report from daily newspaper Dagens Nyheter. The newspaper followed the progress of nearly 15,500 immigrants of working age who received permanent residency in 2004 and are still registered in Sweden. After ten years, those who came here as refugees earned a median wage of only 11,100 kronor per month - less than half the figure for the entire population. Around three out of ten receive welfare benefits from the municipality. Another group who had problems establishing themselves were those who came here to be with relatives. Their median salary after a decade in Sweden was less than 12,000 kronor per month.

ESL Lesson Plans and Resources on Music March is Music in our Schools Month! There has never been a better excuse to get up and dance with your students. To encourage you to bring music into your classroom throughout the year, we’ve created a collection of useful links. These links are full of ideas for using music in the classroom. You will find lesson plans, teacher reflections, books, webinars, website reviews, and more. Thank you to all of our teacher pals for suggesting links to add to this page. Reading images: an introduction to visual literacy “Literacy” usually means the ability to read and write, but it can also refer to the ability to “read” kinds of signs other than words — for example, images or gestures. The proliferation of images in our culture — in newspapers and magazines, in advertising, on television, and on the Web — makes visual literacy , the ability to “read” images, a vital skill.

ABC3 - News - ABC3 Kids Wellbeing 5,000 kids are surveyed about their every day lives. Syria Ceasefire The US and Russia have negotiated a ceasefire. New Spaceship Virgin Galactic has unveiled it's new spaceship, the VSS Unity. Fiji Storm One of the biggest storms in the southern hemisphere. Sniffer Dogs Helping humans in the fight against animal extinction. Lego Job We meet Melody who landed a dream job with Lego. Digital Activities For Visual Literacy Visual literacy is the ability to construct meaning from or communicate meaning through information presented in the form of an image. While it may seem like this could only be applicable to the elementary student, visual literacy pervades all subject areas, disciplines, and grade levels in schools. From identifying patterns, to understanding modern art, to interpreting and creating graphs, visual literacy is one of the most widely important skills students should develop while in K-12 schools. Teaching and practicing visual literacy, as well as making students’ thinking visible to others, has never been easier.

Teaching Visual Literacy to Students Visual literacy is a multi-faceted subject matter, and faculty wishing to include images in their curriculum can quickly find themselves overwhelmed by the prospect of addressing visual literacy. For an introduction to the topic visit The Basics of Visual Literacy: Form, Context and Content. The following tools are intended to help faculty customize their curricula to incorporate visual literacy in ways that suit their individual instructional needs. Some faculty may want to teach visual literacy as a one-time in- or out-of-class activity. Others may want to teach visual literacy as multi-week or semester-long elements of their courses. Each one of the following tools can stand alone, or they can be combined with one another to build a customized visual literacy curriculum that suits your needs.