Bildungsroman. Youtube. Creative Nonfiction. “A Man and a Woman, Say What You Like, They’re Different”: On Marguerite Duras. A French Writer Who Blurred the Line Between Candor and Provocation. Anonymity comes for us all soon enough, but it has encroached with mystifying speed upon the French writer Hervé Guibert, who died at 36 in 1991. 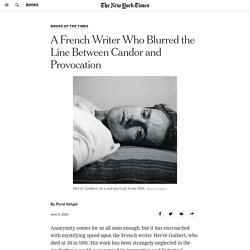 Michel Houellebecq, The Art of Fiction No. 206. Writing an artist statement? First ask yourself these four questions. "Combining radical notions of performativity and the body as liminal space, my practice interrogates the theoretical limitations of altermodernism. 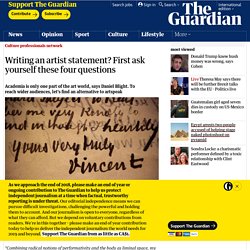 My work, which traverses disparate realms of object-making such as painting and performance, investigates the space between metabolism and metaphysics and the aporia inherent to such a discourse. " Are you impressed yet? These forms of writing are scattered across the contemporary art world. You can find preposterously complex, jargon-laden artist statements on the websites of galleries and pop-up project spaces all over the English-speaking world. James Baldwin on Resisting the Mindless Majority, Not Running from Uncomfortable Realities, and What It Really Means to Grow Up. William Melvin Kelley: The Lost Giant of American Literature. There were arrows, so we followed them. 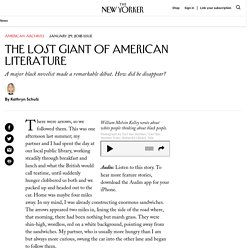 This was one afternoon last summer; my partner and I had spent the day at our local public library, working steadily through breakfast and lunch and what the British would call teatime, until suddenly hunger clobbered us both and we packed up and headed out to the car. Home was maybe four miles away. In my mind, I was already constructing enormous sandwiches. 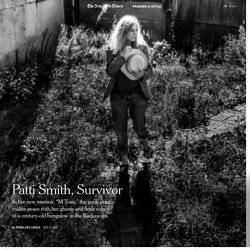 James Wood · On Not Going Home · LRB 20 February 2014. I had a piano teacher who used to talk about the most familiar musical cadence – in which a piece returns, after wandering and variation, to its original key, the tonic – as ‘going home’. 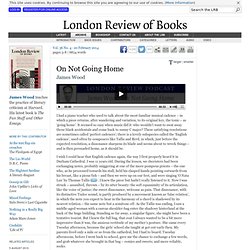 It seemed so easy when music did it: who wouldn’t want to swat away those black accidentals and come back to sunny C major? Moving beyond the Charles Bukowski American lowlife cliche. When Charles Bukowski died in San Pedro 20 years ago, the obituaries in the next day's papers typically began with some iteration of Time magazine's stock description of the writer as the "laureate of American lowlife. 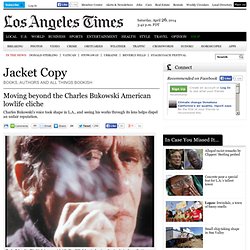 " In the decades since, the drinking, brawling, gambling, whoring cliche has become so entrenched and widely propagated it can be hard to see Bukowski's words for his shadow. The "Barfly" legend, sprouted from the self-mythology Bukowski cultivated in countless quasi-autobiographical works including his celebrated movie screenplay and fed by his real-life drunken bouts of abusiveness, has only grown posthumously. Hordes of websites are devoted to Bukowskiana, his poems are recited in TV spots to sell bluejeans and Scotch, and a biopic written and directed by James Franco is due in theaters this year. In December, a Bukowski-themed bar, called Barkowski, opened in Santa Monica. Bukowski's long reign as a Los Angeles icon can lead us back to the old mythology. 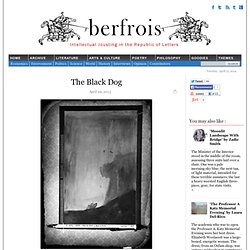 Laurent, 1874. From Archivo Ruiz Vernacci, Fototeca del IPCE, Madrid. by W. H. C. “And if a man shall meet the Black Dog once it shall be for joy; and if twice, it shall be for sorrow; and the third time he shall die.” Web Film & Video: Georges Perec - Récits d'Ellis Island, Part 1: Traces (1978-1980) Duration: 60 minutes Part 1: Traces Part 2: Mémoires, 60 min Produced by: Institut National d'Archives (INA) Written by: Georges Perec Directed by: Robert Bober Sound: Jean-Claude Brisson In 1978, Robert Bober and Georges Perec set out to in the search of traces of Ellis Island, that is, as Georges Perec put it, of "the very site of exile, the place of the absence of place, the non-place, the nowhere. 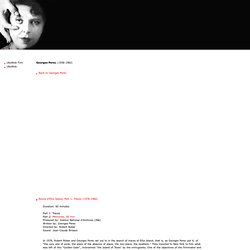 " They traveled to New York to film what was left of this "Golden Gate", nicknamed "the Island of Tears" by the immigrants. 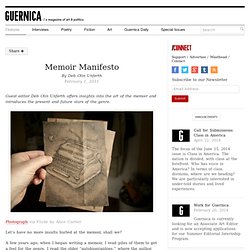 Photograph via Flickr by Alice Carrier Let’s have no more insults hurled at the memoir, shall we? Letters. Jack Kerouac’s List of 30 Beliefs and Techniques for Prose and Life. Italo Calvino on Writing: Insights from 40+ Years of His Newly Released Letters. K. Thomas Kahn on Imre Kertész. Imre Kertész. 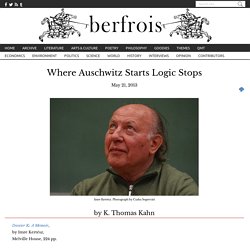 Grand Mal. At the end of 1997 I was thirty-two, living in Richmond, Virginia and in a relationship that was approaching its third anniversary. My boyfriend and I were happy enough, I thought. We shared a rented house, cooked meals; accumulated electronics, bad art and two dogs. Then one day I realized I wasn’t happy at all. But there we were: living together with a pair of dachshunds circling our feet. The break-up was my decision. A week later, my ex called and said we needed to meet. Franz Kafka. Mo Yan wins Nobel prize in literature 2012. The winner of the 2012 Nobel prize for literature is announced at the Swedish Academy in Stockholm Link to video: Mo Yan wins Nobel prize for literature.

The challenge of retelling Grimms' fairy tales. Fed Up so long and variously by Our age's fancy narrative concoctions, I yearned for the kind of unseasoned telling found In legends, fairy tales, a tone licked clean Over the centuries by mild old tongues, Grandam to cub, serene, anonymous. … So my narrative Wanted to be limpid, unfragmented; My characters, conventional stock figures Afflicted to a minimal degree With personality and past experience –A witch, a hermit, innocent young lovers, The kinds of being we recall from Grimm, Jung, Verdi, and the commedia dell'arte.

So writes the American poet James Merrill at the opening of "The Book of Ephraim", the first part of his extraordinary long poem The Changing Light at Sandover (1982). Discussing the way in which he hopes to tell a story of his own, he singles out two of the most important characteristics of the fairy tale, as he sees it: the "serene, anonymous" voice in which it's told, and the "conventional, stock figures" who inhabit it.

Magic Hours: Tom Bissell on the Secrets of Creators and Creation. By Maria Popova “To create anything… is to believe, if only momentarily, you are capable of magic.” Creativity is a peculiar beast. Its nebulous nature and elusive allure don’t stop us from going after it with stubborn precision, tracing its history, dissecting its neuroscience, flowcharting our way to it and itemizing it into a 5-point plan, all in the hope that, if only we understood its inner workings enough and engineered the right conditions, it would bestow its gifts upon us. But, as any creator would attest, there are factors at play well outside our control. Take Melville’s Moby-Dick, for instance. Literary magazines: Read all about it.

Thomas Heise: Unnatural as the Boom. Los Angeles Review of Books - The Sideways Gaze: Roland Barthes’s Travels In China. LATELY THE POSTHUMOUS CORPUS of Roland Barthes has been growing at a rate that rivals Tupac Shakur’s. (Can a hologram Barthes be far behind?) Camus. Can We Ever Know Susan Sontag? Susan Sontag’s son, David Rieff, says he may never have published his mother’s journals had it been up to him. But Sontag left little of her legacy to chance. Writing What Haunts Us. Rachael Mclennan: Anne Frank. Anne Frank by Rachael Mclennan In April this year, BBC Radio 4′s Front Row devoted a programme to Anne Frank, a young Jewish girl who went into hiding with her family in an Amsterdam annexe during the Second World War.

Rebecca Solnit · Diary: In Fukushima · LRB 10 May 2012. George Orwell. Novels. Not Since 1977: No Pulitzer Awarded For Fiction. Copyright © 2012 NPR. For personal, noncommercial use only. See Terms of Use. For other uses, prior permission required. Pulitzer Prizes went to journalists yesterday, in categories like local reporting, investigative reporting and breaking news. But no one was recognized for editorial writing.

Adam Shatz reviews ‘The Patagonian Hare’ by Claude Lanzmann, translated by Frank Wynne · LRB 5 April 2012. Anthony Burgess on the Short Story. I believe all novelists should also write short stories. Anthony Burgess had this feeling too, even though he himself largely stopped writing short stories quite early in his career — there’s a piece he wrote about the short story, in “Les Cahiers de la nouvelle” #2, January 1984, that raises a lot of important issues. Burgess subjectively dated “the twilight of the short story as a commercial form” to around 1959 – fifty years ago as I write this blog post. He wrote –