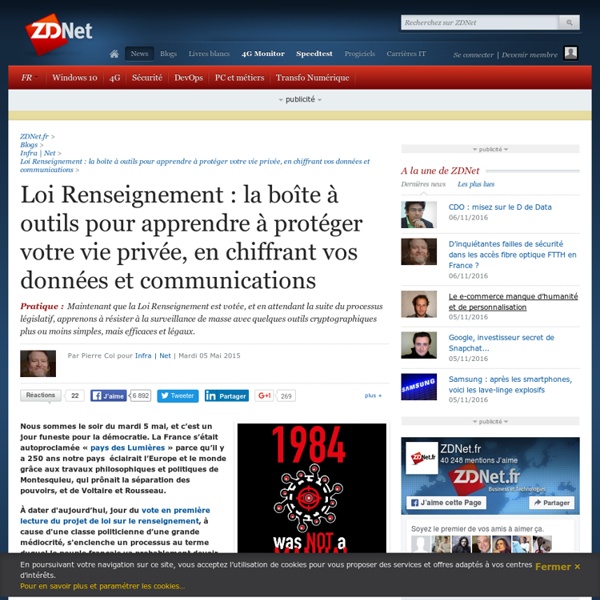 Comparison of DNS server software - Wikiwand Servers compared Each of these DNS servers is an independent implementation of the DNS protocols, capable of resolving DNS names for other computers, publishing the DNS names of computers, or both. Excluded from consideration are single-feature DNS tools (such as proxies, filters, and firewalls) and redistributions of servers listed here (many products repackage BIND, for instance, with proprietary user interfaces). DNS servers are grouped into several categories of specialization of servicing domain name system queries. The two principal roles, which may be implemented either uniquely or combined in a given product are: BIND is the de facto standard DNS server.

5 Ways to Reinforce Your Privacy on the Internet Internet privacy is a very important issue. Protecting online identity is something that every person should learn. Recent hacking attacks on Apple and Sony Pictures and other big companies have raised awareness on online security. Security researchers found another 'massive security risk' in Lenovo computers Three months after Lenovo was called out for installing dangerous software onto its computers, the world's largest PC manufacturer has once again been accused of lax security measures. Security firm IOActive reports that it discovered major vulnerabilities in Lenovo's update system that could allow hackers to bypass validation checks, replace legitimate Lenovo programs with malicious software, and run commands from afar. The vulnerabilities were found in February Through one of the vulnerabilities, IOActive researchers explained that attackers could create a fake certificate authority to sign executables, allowing malicious software to masquerade as official Lenovo software. Should a Lenovo owner update their machine in a coffee shop, another individual could conceivably use the security hole to swap Lenovo's programs with their own — what the researchers call the "classic coffee shop attack."

How To Make VPNs Even More Secure From being a niche product used by the few, in the past few years VPN services have hit the big time. These days more and more Internet users see running a privacy enhancing service as a requirement rather than just a luxury. Today we take a look at a few tips and tricks that can enhance the security of any VPN. While simple to set up and use out of the box, it may comes as a surprise that the security of VPN anonymity services can be improved. Of course, when things run absolutely to plan there’s little to worry about, but there are occasions where there may be a hiccup or where an extra level of security is needed. Securing your privacy when your VPN fails Tool for journalists: Riddle, for creating interactive polls and lists Credit: Image by Thinkstock. What is it? Tool for adding quizzes, polls and BuzzFeed-style lists to any story.

ITU and Google face off at Dubai conference over future of the internet Two thousand delegates from 193 countries are meeting for the World Conference on International Telecommunications (WCIT) in Dubai this week to negotiate a treaty on telecoms regulation that has not been updated since 1988 - before the internet was in mainstream use. Up for negotiation at WCIT are the International Telecommunications Regulations, or ITRs, which cover everything from improving internet access for the elderly and disabled, to enabling access for the 4.6bn people in the world with no access at all, improving cybersecurity and, most controversially, discussing the "sender pays" economic model of delivering web content. Amid all the hyperbole and acres of coverage about the future of the free internet, the treaty is the latest round of a long-fought battle between the internet lobby and the telecommunications companies. Back at the ITU, the small staff team has seemed increasingly bewildered and put on the back foot by the ferocious onslaught of press coverage against them.

Tracking Protection on Firefox Tracking is the collection of a person’s browsing data across multiple sites, usually via included content. Tracking domains attempt to uniquely identify a person through the use of cookies or other technologies such as fingerprinting. Tracking Protection allows you to take control of your privacy online. Part 1 - How to Prevent Phishing: Customize your settings in Trend Micro Security - If you’ve ever been “phished,” you’ve experienced the dangers of receiving phony emails, downloaded files, instant messages, or links to false websites masquerading as real ones—all designed to steal your data, your identity, or most likely, your money. You need to be vigilant to not fall for these scams, but vigilance is not enough these days. You need the help of top-notch security software, such as Trend Micro Security. Its sophisticated anti-phishing technologies can help protect you from being scammed.

Tips for Using Public Wi-Fi Networks Wi-Fi hotspots in coffee shops, libraries, airports, hotels, universities, and other public places are convenient, but often they’re not secure. If you connect to a Wi-Fi network, and send information through websites or mobile apps, it might be accessed by someone else. To protect your information when using wireless hotspots, send information only to sites that are fully encrypted, and avoid using mobile apps that require personal or financial information. How Encryption Works Encryption is the key to keeping your personal information secure online. Encryption scrambles the information you send over the internet into a code so it’s not accessible to others.

The one word reporters should add to Twitter searches that you probably haven’t considered The one word journalists should add to Twitter searches that you probably haven’t considered I’m a staff editor on the news desk of The New York Times, focused on the Watching feature of the nytimes.com home page. Before that I was a staff editor on our social media desk for two years. Please forgive the gimmicky headline. I promise the word is coming. Balanced Scorecard for Information Security Introduction Published: March 06, 2007 On This Page Executive Summary Balanced Scorecard background Problems with Information Security Justification How VPN Networks can help improve mobile security inShare0 Over the past couple of years, the Prismgate and Heartbleed scandals have exposed gaping holes in online security, leaving our personal data open to attacks from hackers and other unauthorised viewers. To try and combat the problem, companies have tightened their protocols and developed patches to cover any known bugs. These fixes have helped to a certain extent, but are often only designed for specific devices or industries. With mobile web usage increasing every day, other forms of technology are needed to help users who want secure access, whenever and wherever they might be.

Fortinet Launches New FortiGate 3000 series and an Enhanced FortiClient Endpoint Solutions at GISEC 2015 Dubai, UAE, April 26, 2015: Fortinet, a global player in high-performance cyber security solutions, is protecting customers at every entry point into the network with its expanded Advanced Threat Protection (ATP) framework, which extends from endpoint devices all the way to the data center. The company today announced enhancements to its FortiClient solution at the Gulf Information Security Exhibition (GISEC) 2015. The enhanced FortiClient solution enables every device – local or remote, stationary or mobile – to be protected anytime, anywhere.

Five smart ways to keep your browsing private For many of us, the only time we think about who's tracking our online habits is when a site seems to know more about us than we think it could. There's a lot more going on under the surface, though, and anyone from marketers to employers to private investigators could have access to your browsing sessions if you don't take active countermeasures. Here are five tools that work quite well: Removing cookies and more.