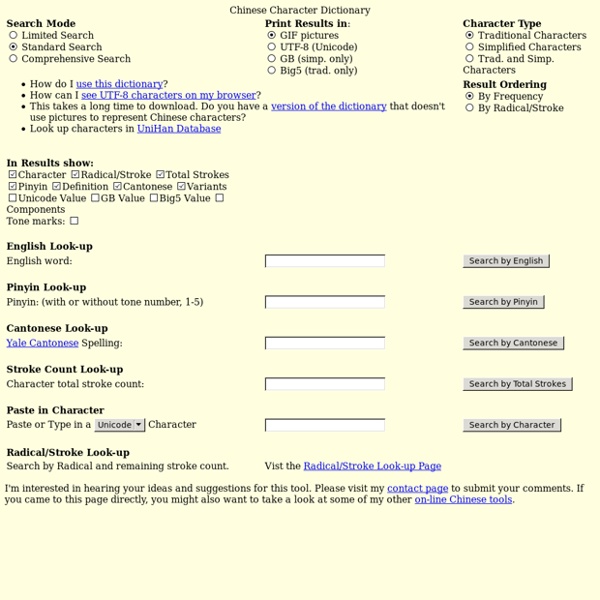 Urban Dictionary Chinese-English Dictionary To search for pinyin ü, use "u:" (u followed by a colon) or "v". If you are willing to host this dictionary, I have made the necessary files available in a zip file. To set up a mirror, you will need CGI access on your server. This Chinese/English dictionary provides a searchable interface for the CEDICT dictionary originally put together by Paul Denisowksi. Some points to remember when using this dictionary: You can download the dictionary data at the CEDICT website. For a off-line way to search the dictionary, please check out the CEL utility from Richard Warmington. When searching by Chinese you can tell the dictionary to find entries that start with the characters, end with the characters, or have the characters anywhere within the final word. When searching by pinyin, you must include a space between the different pinyin syllables. When searching by English, searches are not case sensitive. To search by radical/stroke order, please use my Character Dictionary.

Linux Dictionary This document is designed to be a resource for those Linux users wishing to seek clarification on Linux/UNIX/POSIX related terms and jargon. At approximately 24000 definitions and two thousand pages it is one of the largest Linux related dictionaries currently available. Due to the rapid rate at which new terms are being created it has been decided that this will be an active project. Please note that if you wish to find a 'Computer Dictionary' then see the 'Computer Dictionary Project' at Searchable databases exist at locations such as: (SWP) Sun Wah-PearL Linux Training and Development Centre is a centre of the Hong Kong Polytechnic University, established in 2000. Geona, operated by Gold Vision Communications, is a new powerful search engine and internet directory, delivering quick and relevant results on almost any topic or subject you can imagine.

Help:IPA for English Throughout Wikipedia, the pronunciations of English words are conveyed by means of the International Phonetic Alphabet (IPA); for a basic introduction to IPA, see Help:IPA/Introduction. In particular, the following tables list the relevant transcription for various English diaphonemes; for a more complete key, see Help:IPA, which includes sounds that do not occur in English. (If the IPA symbols are not displayed properly by your browser, then see the links at the bottom of this page.) If you feel it is necessary to add a pronunciation respelling using another convention, then please use the conventions of Wikipedia's pronunciation respelling key. Dialect variations This key accommodates standard General American, Received Pronunciation, Canadian English, South African English, Australian English, and New Zealand English pronunciations. Other words may have different vowels depending on the speaker. Key (Words in SMALL CAPITALS are the standard lexical sets. See also Notes External links

English verb Conjugation: modal verbs, irregular verbs, present, future, participle French › Level one lessons › People and things · Les gens et les choses By the end of this lesson, you should understand: Qu’est-ce que c’est ? C'est une colombe. Voici les deux garçons ! Grammar · Gender of nouns · Genre des noms[edit] In French, all nouns have a grammatical gender; that is, they are either masculine (m) or feminine (f). Most nouns that express people or animals have both a masculine and a feminine form. However, there are some nouns that talk about people or animals whose gender is fixed, regardless of the actual gender of the person or animal. The nouns that express things without an obvious gender (e.g., objects and abstract concepts) have only one form. (show ▼) Supplementary grammar · Common endings [edit] Exceptions[edit] There are many exceptions to gender rules in French which can only be learned. Vocabulary · Example nouns [edit] Vocabulary gallery Grammar · Articles [edit] The definite article · L'article défini[edit] In English, the definite article is always the. In French, the definite article is changed depending on the noun's: /fil/ ).

French Phrases - Most Common French Phrases Take a look at this list to learn some of the most useful and common French phrases. Only the most common translation(s) are provided here, so please click the links for more detailed information about each phrase. à cause de because of, due toah bon (?) oh really? allons-y ! bien dans sa peau content, comfortable, at ease with oneselfbien entendu of course, obviouslybien sûr of courseblague à part seriously, all kidding asideBon anniversaire ! ça alors how about that, my goodnessça marche ok, that worksça m'est égal it's all the same to meça ne fait rien never mind, it doesn't matterça va (?) ce n'est pas grave it doesn't matter, no problemce n'est pas terrible it's not that greatcomme d'habitude, comme d'hab as usualun coup de fil phone callun coup d'œil glance, quick look d'ailleurs moreover, might I adddéjà vu already seende rien you're welcomede trop too much / manydis donc / dites donc wow, by the waydu coup as a resultdu jour au lendemain overnightdu tout not/none at all

Norwegian English: a fusion language English, we often hear, is the world’s first truly global language, spoken in more places by more people than any other language in history. Partly this is so, simply, because there are more people today than at any previous time and because more of the world is known than was in Antiquity. In the time of Alexander the Great, Greek was spoken by fewer than ten million individuals, none of whom would have known about the millions who spoke other languages in Asia, southern Africa, Polynesia, and North and South America. And partly English is global because of modern technology. Language is malleable But another part of the reason that English is global is that the language itself is malleable, shaped by the experiences of those who use it. Norway is such a place. A linguistic jazz riff But that doesn’t mean that Norwegians speak and write the same English that’s heard in any of these other places. Is that English or Norwegian? Lita Ready!

Building an Archive of ALL Documented Human Languages. - The Rosetta Project