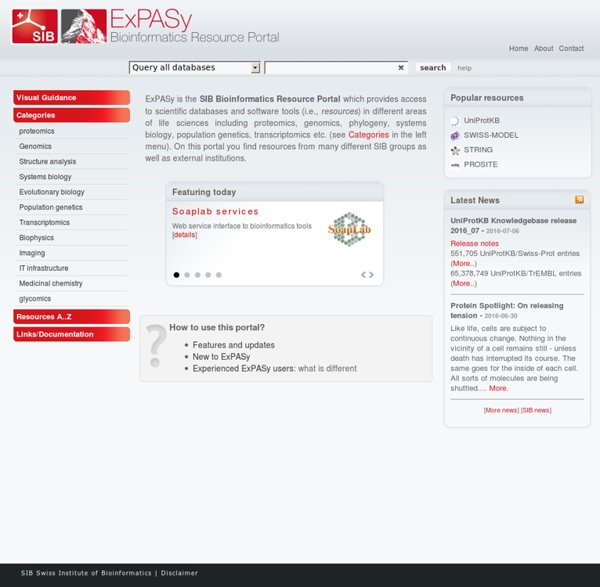 The Human Protein Atlas EMBL EMI Interpro InterPro: protein sequence analysis & classification InterPro provides functional analysis of proteins by classifying them into families and predicting domains and important sites. We combine protein signatures from a number of member databases into a single searchable resource, capitalising on their individual strengths to produce a powerful integrated database and diagnostic tool. Read more about InterPro Documentation About InterPro: core concepts, update frequency, how to cite, team and consortium members. FAQs: what are entry types and why are they important, interpreting results, downloading InterPro? Web services documentation Protein focus The sweetest thing Our sugar consumption has reached to such a level that it carries health risks such as obesity, diabetes. Publications The InterPro protein families database: the classification resource after 15 years Our latest paper describing new developments on the InterPro website (Nucleic Acids Research, Jan 2015). Tools InterProScan Blog

Protein Data Bank - RCSB PDB A Structural View of Biology This resource is powered by the Protein Data Bank archive-information about the 3D shapes of proteins, nucleic acids, and complex assemblies that helps students and researchers understand all aspects of biomedicine and agriculture, from protein synthesis to health and disease. As a member of the wwPDB, the RCSB PDB curates and annotates PDB data. The RCSB PDB builds upon the data by creating tools and resources for research and education in molecular biology, structural biology, computational biology, and beyond. Use this website to access curated and integrated biological macromolecular information in the context of function, biological processes, evolution, pathways, and disease states. A Molecular View of HIV Therapy January Molecule of the Month Nuclear Pore Complex Deposition Preparation Tools Data Extraction Small Molecules Ligand Expo: Search the Chemical Component Dictionary for the IDs of released ligands Data Format Conversion 3D Structure Viewers

Socotra Socotra (Arabic: سُقُطْرَى‎ Suquṭra), also spelled Soqotra, is a small archipelago of four islands in the Indian Ocean. The largest island, also called Socotra, is about 95% of the landmass of the archipelago. It lies some 240 kilometres (150 mi) east of the Horn of Africa and 380 kilometres (240 mi) south of the Arabian Peninsula.[2] The island is very isolated and a third of its plant life is found nowhere else on the planet. It has been described as "the most alien-looking place on Earth". The island measures 132 kilometres (82 mi) in length and 49.7 kilometres (30.9 mi) in width.[3] Socotra is part of Yemen. Etymology[edit] In the notes to his translation of the Periplus, G.W.B. History[edit] Map of the Socotra archipelago There was initially an Oldoway (or Oldowan) culture in Socotra. Socotra appears as Dioskouridou ("of Dioscurides") in the Periplus of the Erythraean Sea, a 1st-century AD Greek navigation aid. The islands passed under the control of the Mahra sultans in 1511.

IMP Bioinformatics Group The IMP-IMBA Bioinformatics group was established in August 2007 in recognition of the growing importance of computational biology in biomedical research. We offer inter-disciplinary expertise in biocomputing and information technology. Special thanks to the for their cooperation. Sequence Analysis A major aspect of our work is the functional and structural characterization of biological sequences in close cooperation with experimental partners. Due to the multitude of similar and complementary tools available for protein sequence analysis, it can be valuable to consider the predictions from many tools at once. Using meta-analysis of different prediction results one can typically derive far reaching conclusions that can not be obtained using one automatic procedures alone. Large Scale Data Sets Functional information on sequences are often stored in many individual databases.

FlyBase Cell Signaling Technology WormBase Genome Browser wFleaBase BioMed Central | The Open Access Publisher The National Evolutionary Synthesis Center Genomes Pages The first completed genomes from viruses, phages and organelles were deposited into the EMBL Database in the early 1980's. Since then, molecular biology's shift to obtain the complete sequences of as many genomes as possible combined with major developments in sequencing technology resulted in hundreds of complete genome sequences being added to the database, including Archaea, Bacteria and Eukaryota. These web pages give access to a large number of complete genomes, help is available to describe the layout. Whole Genome Shotgun Sequences (WGS) Methods using whole genome shotgun data are used to gain a large amount of genome coverage for an organism. More information about WGS projects...

Friday Harbor Labs This fish Sucks The aptly named northern clingfish uses its fins to suck onto the roughest and slimiest of marine surfaces. Drs. Are bulkheads bad for Puget Sound? Enviros and waterfront owners have argued the question for years. Read article online 2014 Courses and Apprenticeships FHL is accepting applications for 2014 courses and research apprenticeships. General Student Information Spring 2014 | Summer 2014 | Autumn 2014 Tide Bites Ocean Acidification Makes Life Riskier for Oyster Larvae by Emma Timmins-Schiffman Read Volume 8 Archives: Volume 76 | 5 | 4 | 3 | 2 | 1 Spring 2014 eNewsletter available Read here FHL Calendar Open House On May 10 FHL will offer a splendid opportunity to meet scientists and students at the Labs and check out the research and teaching facilities. Jazz at the Labs On June 14 FHL will hold its 14th annual Jazz at the Labs, an evening of food and GREAT music.