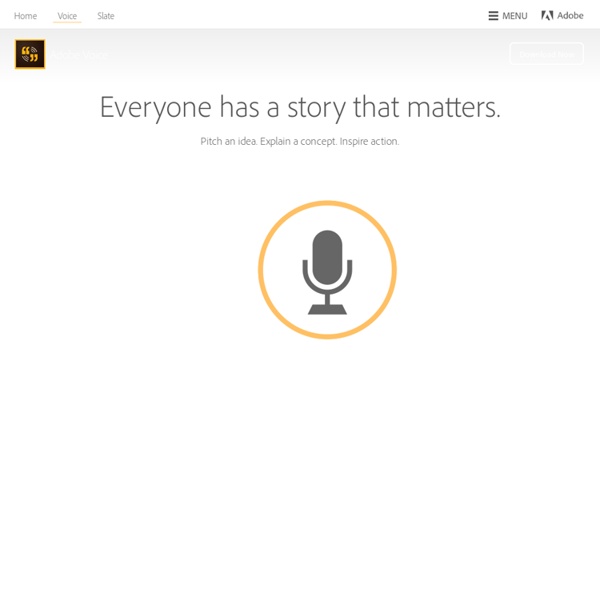 Flipgrids - share short videos The website located at flipgrid.com and the mobile application called “Flipgrid” (the "App" and, together with the website, the "Site") and the services offered through the Site (the "Services") are copyrighted works belonging to Vidku, Inc. ("Flipgrid", "us", "our", and "we"). Certain features of the Site or Services may be subject to additional guidelines, terms, or rules, which will be posted on the Site or Services in connection with such features. All such additional terms, guidelines, and rules are incorporated by reference into these Terms. In the event of a conflict between the additional terms and any provision in these Terms, the additional terms will prevail, but only with respect to the Service to which the additional terms apply.

10 Word Cloud Generators You Have Probably Never Tried A few days back, we looked at five great ways to incorporate word cloud generators into your classroom. There are obviously many more uses out there for them – but that is a discussion for another post. We’ve mentioned most of these before – in a post from way back when – so I won’t go into too much detail about each individual one, but we’ve added a few notable ones to the list. (Of note, the list is in no particular order).

Common Core Watch Since we at Fordham began reviewing state academic standards in 1997, we have understood—and made clear—that standards alone are insufficient to drive improvements in student achievement. Standards describe the destination, but they don’t chart the journey for leaders, teachers, or schools, which means that for standards to have any impact on what students actually learn, they must influence curriculum decisions, assessments, and accountability. Educators intuitively understand this, but not all policy makers and pundits appear to. The need for standards-aligned curricula is undoubtedly the most cited challenge for states, districts, and schools implementing the Common Core. Yet five years into that implementation, teachers still report scrambling to find high-quality, standards-aligned instructional materials. Despite publishers’ claims, there is a dearth of programs that are truly aligned to the demands of the Common Core for content and rigor.

English Idioms Beginning With 'A' - Page 1 Showing 1-50 of 203 results for letter 'A' A barking dog seldom bites A person who readily threatens other people does not often take action. A bit much If something is excessive or annoying, it is a bit much. A bridge too far Video Video Projects for Digital Learners "Humans are incredibly visual and powerful, moving images help us find meaning… [and] video helps capture and contextualize the world around us." - Dan Patterson Some of the most popular apps and social networks (Periscope, Instagram, Youtube, etc.) make it easy for anyone to quickly produce, publish, and share their videos. Chances are your students have already produced their own videos and shared them with the world. So why not have your students share their knowledge through video projects? Students can create video tutorials, silent films, screencasts, lip dubs, commercials, news reports, music videos, documentaries, movie trailers, video diaries, vodcasts, soap operas, stop motion films, machinimas, claymation, talk shows, and game shows.

Education Week By Peter Greene June 10, 2015 at 8:41 AM Balancing the Equation: Supply and Demand in Tomorrow's School Choice Marketplaces offers a more nuanced view of a charter-choice landscape than the freemarket acolytes at AEI have presented in the past, but it still reads like an exercise in unicorn farming. By Peter Greene June 3, 2015 at 11:49 AM It's time for the beginning of summer break. What's next for educators after Twitter? – A.J. JULIANI Ahh Twitter. You have a place in my heart. But if you were on the platform this weekend and saw the #RIPTwitter hashtag trending, it has never been more apparent that Twitter is losing market share, eyeballs, and users. Not only that, it’s losing educators. 4 Lead Gen Campaign Ideas (+ the Landing Page Templates to Power Them) All right, so you launched your most recent marketing campaign, promoted it with an eagerness you didn’t know you had, and juuuust as you’re unwrapping your celebratory Snickers bar at your desk, lead gen Greg appears to ask when you can crank out the next one. …The next campaign that is. He’s not interested in your Snickers bar.

Related:  ESPE - Territoire Numérique - lire/écrire
Related:  hooks247   -  Ideas   -  The spoken word   -  Create a Book using a Template | StoryJumper   -  ReadWriteThink: Student Materials: Flip Book   -  Character Scrapbook   -  google docs | Educational Technology and Mobile Learning   -  21 Simple Ways To Motivate Your Students - Edudemic   -  How to Give a Great Presentation: Timeless Advice from a Legendary Adman, 1981 | Brain Pickings   -  Silent Circle's latest app democratizes encryption. Governments won't be happy.   -  If students designed their own schools... - YouTube   -  Generation YES   -  A Scientific Guide to Saying "No": How to Avoid Temptation and Distraction - The Buffer Blog   -  35 Greatest Speeches in History | The Art of Manliness   -  9 Web 2.0 Sites to Publish Student Work - Teach Amazing!   -  How Can I Make My PowerPoint Presentations Amazing?   -  Populr.me - Create a Page for Anything in 5 Minutes   -  Knack - easy online database and business apps   -  Hostage Negotiation Techniques That Will Get You What You Want   -  Finding Your Passion In Work: 20 Awesome Quotes | LinkedIn   -  How It Works   -  A Developmental Tour of the Imagination: What Children's Use of Metaphor Reveals about the Mind | Brain Pickings   -  Unauthorized Movie Filmed Guerrilla-Style At Disney World Apparently Heading For a Theater Near You | Co.Create | creativity + culture + commerce   -  Top 20 Best PowerPoint Presentations - Cubicle Ninjas   -  [ Wikidébrouillard ] Android et arduino   -  How to Be a Writer: Hemingway’s Advice to Aspiring Authors | Brain Pickings   -  The internet mystery that has the world baffled - Telegraph   -  6 Ways to Honor the Learning Process in Your Classroom   -  Great speeches of the 20th century | From the Guardian   -  Three Elements of Great Communication, According to Aristotle - Scott Edinger - Harvard Business Review