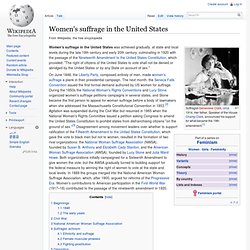 " Beginnings[edit] Lydia Taft (1712–1778), a wealthy widow, was allowed to vote in town meetings in Uxbridge, Massachusetts in 1756.[4] No other women in the colonial era are known to have voted. New Jersey in 1776 placed only one restriction on the general suffrage, which was the possession of at least £50 in cash or property (about $8,000 adjusted for inflation), with the election laws referring to the voters as "he or she. 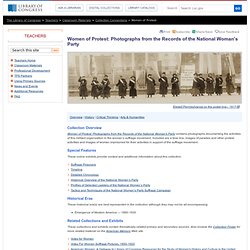 Included are a time line, images of parades and other protest activities and images of women imprisoned for their activities in support of the suffrage movement. Special Features These online exhibits provide context and additional information about this collection. Historical Eras These historical era(s) are best represented in the collection although they may not be all-encompassing. Emergence of Modern America — 1890-1930 Related Collections and Exhibits These collections and exhibits contain thematically-related primary and secondary sources. Other Resources Recommended additional sources of information.

Search Tips Specific guidance for searching this collection. To find items in this collection, search by Keyword or browse by Title or Subject. U.S. Introduction Critical Thinking. Sufragist+I.jpg 214×320 pixels. Ratification of Constitutional Amendments. The 26th Amendment — History.com Articles, Video, Pictures and Facts. On March 10, 1971, the U.S. 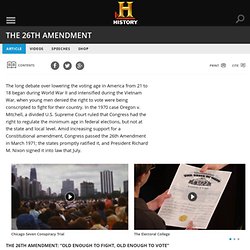 Senate voted unanimously in favor of the proposed amendment. After an overwhelming House vote in favor on March 23, the 26th Amendment went to the states for ratification. In just over two months–the shortest period of time for any amendment in U.S. history–the necessary three-fourths of state legislatures (or 38 states) ratified the 26th Amendment, and President Nixon signed it into law that July. At a White House ceremony attended by 500 newly eligible voters, Nixon declared: “The reason I believe that your generation, the 11 million new voters, will do so much for America at home is that you will infuse into this nation some idealism, some courage, some stamina, some high moral purpose, that this country always needs.” Though newly minted young voters were expected to choose Democratic challenger George McGovern, an opponent of the Vietnam War, Nixon was reelected by an overwhelming margin–winning 49 states–in 1972.

Civil Rights Act of 1964. The Civil Rights Act of 1964 (Pub.L. 88–352, 78 Stat. 241, enacted July 2, 1964) is a landmark piece of civil rights legislation in the United States[4] that outlawed discrimination based on race, color, religion, sex, or national origin.[5] It ended unequal application of voter registration requirements and racial segregation in schools, at the workplace and by facilities that served the general public (known as "public accommodations"). 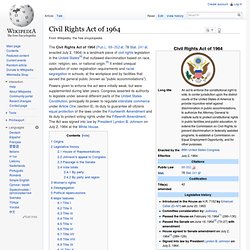 Powers given to enforce the act were initially weak, but were supplemented during later years. Congress asserted its authority to legislate under several different parts of the United States Constitution, principally its power to regulate interstate commerce under Article One (section 8), its duty to guarantee all citizens equal protection of the laws under the Fourteenth Amendment and its duty to protect voting rights under the Fifteenth Amendment. The Act was signed into law by President Lyndon B. Johnson on July 2, 1964 at the White House. 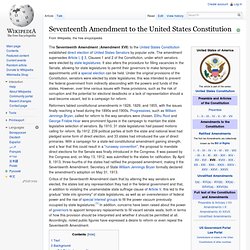 Progressives, such as William Jennings Bryan, called for reform to the way senators were chosen. Elihu Root and George Frisbie Hoar were prominent figures in the campaign to maintain the state legislative selection of senators. By 1910, 31 state legislatures had passed motions calling for reform. By 1912, 239 political parties at both the state and national level had pledged some form of direct election, and 33 states had introduced the use of direct primaries. With a campaign for a state-led constitutional amendment gaining strength, and a fear that this could result in a "runaway convention", the proposal to mandate direct elections for the Senate was finally introduced in the Congress.

Text[edit] Background[edit] Original composition[edit] Issues[edit] Electoral deadlocks were another issue. Zywicki again argues that this was not a serious issue. Universal Declaration of Human Rights. Source: United Nations Department of Public Information Preamble Whereas recognition of the inherent dignity and of the equal and inalienable rights of all members of the human family is the foundation of freedom, justice and peace in the world, Whereas disregard and contempt for human rights have resulted in barbarous acts which have outraged the conscience of mankind, and the advent of a world in which human beings shall enjoy freedom of speech and belief and freedom from fear and want has been proclaimed as the highest aspiration of the common people, Whereas it is essential, if man is not to be compelled to have recourse, as a last resort, to rebellion against tyranny and oppression, that human rights should be protected by the rule of law,

The Year of Rebellion. Demonstrators' resilience in 2011 has changed the regional context for human rights © AP Photo / Tarek Fawzy This week, we approach the first major anniversary of the popular uprisings that began to sweep through the Middle East and North Africa last year. 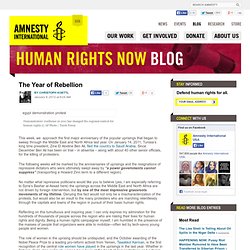 On January 14, 2011, Tunisia’s long time president, Zine El Abidine Ben Ali, fled the country to Saudi Arabia. Since December Ben Ali has been on trial – in absentia – along with about 40 other senior officials, for the killing of protesters. The following weeks will be marked by the anniversaries of uprisings and the resignations of repressive dictators who were ultimately swept away by “a power governments cannot suppress” (transporting a Howard Zinn term to a different region). Tracking suppression of online free speech. 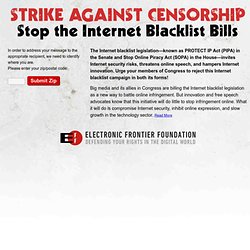 Urge your members of Congress to reject this Internet blacklist campaign in both its forms! Big media and its allies in Congress are billing the Internet blacklist legislation as a new way to battle online infringement. But innovation and free speech advocates know that this initiative will do little to stop infringement online.