Three Elements of Great Communication, According to Aristotle - Scott Edinger 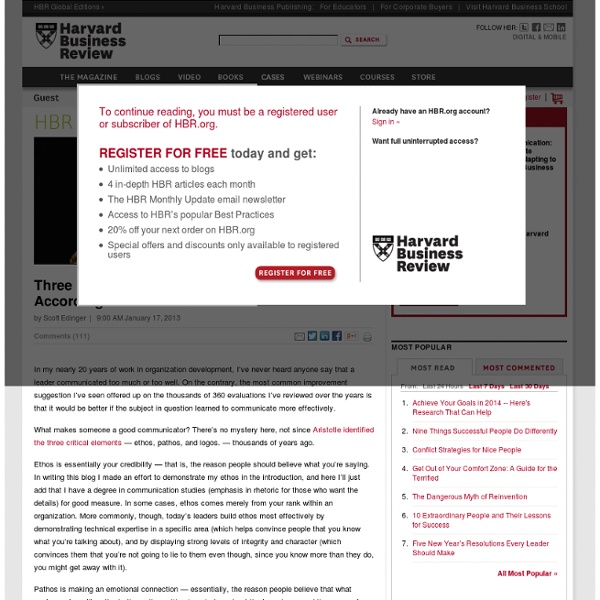 by Scott Edinger | 9:00 AM January 17, 2013 In my nearly 20 years of work in organization development, I’ve never heard anyone say that a leader communicated too much or too well. On the contrary, the most common improvement suggestion I’ve seen offered up on the thousands of 360 evaluations I’ve reviewed over the years is that it would be better if the subject in question learned to communicate more effectively. What makes someone a good communicator? There’s no mystery here, not since Aristotle identified the three critical elements — ethos, pathos, and logos. — thousands of years ago. Ethos is essentially your credibility — that is, the reason people should believe what you’re saying. Pathos is making an emotional connection — essentially, the reason people believe that what you’re saying will matter to them. But all the authority and empathy in the world won’t really help you if people don’t understand what you’re talking about or how you came to your conclusions. Related:  CMC

A bit of Blackboard TLC | The Learning Edge Blackboard European Teaching and Learning Conference at Aston University, Birmingham Last week I was in Birmingham for the Blackboard Teaching and Learning Conference. This conference allows those interested or involved in Learning Technology to get together to discuss, demonstrate and network with colleagues from institutions all over Europe. The main themes involved: Engagement & RetentionInstructor AdoptionDigital Collaboration SolutionsInstitutional ValueLarge Course Support The ‘Roadmap’ session. This session is always one of the best attended sessions at the conference. Post first on discussion forums; before a student gets to see what other students have written they have to create their own post/message first.Roll over of course dates for the following year which will automatically adjust the dates for the next year in one go! Some features suggested for later releases include: The Roadmap session was particularly relevant to us as we are looking at upgrading in the summer.

A new way to learn foreign languages Bilingual: Polyglot Indonesia was formed by Arradi Nur Rizal after he returned from Argentina and wanted to keep up his Spanish skills. Courtesy of Polyglot Indonesia Arradi Nur Rizal could speak Spanish after living in Argentina for a year. As a fellow in a student exchange program, learning to speak the local language was a must. Unfortunately, after he returned to Indonesia, Rizal lost some of his speaking ability, as he didn’t have any friends to practice with. “I had not spoken Spanish for six years and I lost so much vocabulary as a result,” Rizal told The Jakarta Post in a recent interview. He said he did not want that to happen to others who had learned a foreign language but had nowhere to practice. In Polyglot Indonesia, people who can speak several languages can meet up and practice. Rizal believes learning a language is not easy because it requires serious study and a lot of effort. Polyglot Indonesia was established in June 2012. “I study the language by myself.

Technology: Virtual mobility with a difference « European Association for International Education European Association for International Education Student mobility is on the rise. A previous Communiqué of the Conference of European Ministers Responsible for Higher Education set a target of at least 20% of those graduating in the European higher education area having participated in a study or training period abroad by 2020. While this aim is very desirable, it does beg the question: What about the remaining 80% of students who may not engage in some kind of physical mobility during their studies? The need to expose the maximum number of students to the benefits of working and interacting with members of other cultures has led many educators to engage their students in telecollaborative or online intercultural exchange projects with partner students in distant locations around the globe. These exchanges usually involve collaborative project work using two or more languages. Integrated virtual mobility Combining virtual and physical mobility So why isn’t everyone doing it? Supporting new telecollaborators Related posts:

Cultura Inter-university telecollaboration to improve academic results Public release date: 13-May-2013 [ Print | E-mail | Share ] [ Close Window ] Contact: Aitziber Lasa a.lasa@elhuyar.com 34-943-363-040 Elhuyar Fundazioa This news release is available in Spanish . Ana Sánchez and José Miguel Blanco, lecturers in the Department of Computer Languages and Systems of the UPV/EHU-University of the Basque Country, together with Arturo Jaime and César Domínguez, lecturers in the Department of Mathematics and Computing at the University of La Rioja, have developed an experience between the two universities by systematically incorporating telecollaboration. "Our proposal," explains Ana Sánchez, "has pursued three objectives". Each team, formed by one student from each university, worked on different phases of a simple project to create a database, from the conception of certain requisites to the carrying out of enquiries. 36 students from each university participated as telecollaborators. Positive academic results About the authors [ Print | E-mail |

Technology and Second Language Learning A revised version of this appeared as:Warschauer, M., & Meskill, C. (2000). Technology and second language learning. In J. Technology and Second Language Teachingby Mark Warschauer and Carla Meskill The above examples are not atypical of what is occurring in language classrooms across the United States. However, the recent enthusiasm for technology in language teaching? A Brief History of Technology and Language Learning Virtually every type of language teaching has had its own technologies to support it. In contrast, the audio-tape was the perfect medium for the audiolingual method (which emphasized learning through oral repetition). By the late 1970s, the audiolingual method fell into disrepute, at least in part due to poor results achieved from expensive language laboratories. The 1980s and 1990s have seen a shift toward communicative language teaching, which emphasizes student engagement in authentic, meaningful interaction. Cognitive Approaches Sociocognitive Approaches

INQUIRER.net | Latest Philippine News for Filipinos Is the migration of Flash eLearning courses to HTML5 becoming a reality? Rapid authoring tools are updating themselves with HTML5 output, while an increasing number of learning and development managers create courses based on HTML5 that are highly interactive, accessible, editable and translatable. Let’s see why it’s not possible to avoid the migration, within the context of an ever-changing IT environment. A reality indeed. As HTML5’s impact continues to ripple, many companies are dealing with the necessity of abandoning Flash applications. HTML5 is more flexible, allows movement, doesn’t affect SEO and doesn’t need a plug-in. Rapid development and use of iPads and SmartphonesMore and more companies are looking to develop applications for iPads and Smartphones, which don’t support Flash and rather prefer HTML and JavaScript.Cross-browser functionalityIE6 and IE7 are already considered old; yet some companies seem to be reluctant to abandon them. How to go from Flash eLearning course to HTML5 eLearning courses? So what’s the way to go about this?

thelmagazine Perhaps one of the proudest moments of my life (or perhaps not) was when I convinced my mother of the pointlessness of leaving me voicemail. "I won't listen to it," I told her. "I can see that you've called. Bilton starts off by observing "Some people are so rude.

Video communication apps and mobile learning One of the great things about mobile devices such as tablets, iPads and phones is that most modern devices have good quality cameras and microphones built in. This opens up a really wide range of potential for communication and speaking practice that used to be such a struggle to organise on older laptops and desktop computers. App developers have also been quick to exploit the potential of this powerful tool and in this post I'd like to look at some of the tools that have been created and how they can be used for language development. Mailvu for asynchronous messages Mailvu has been a long time favourite of mine, mainly because the web based version is so easy to use and doesn't require any downloads. EyeReport for picture in picture EyeReport puts an interesting twist on the video communication genre by adding the ability to record video on video. CoachesEye for video annotation CoachesEye is a similar app to EyeReport (though this one is no longer free) but is much more feature rich.

Folksonomies - Cooperative Classification and Communication Through Shared Metadata The Creation of Metadata: Professionals, Content Creators, Users Metadata is often characterized as “data about data.” Metadata is information, often highly structured, about documents, books, articles, photographs, or other items that is designed to support specific functions. Traditionally metadata is created by dedicated professionals. While professionally created metadata are often considered of high quality, it is costly in terms of time and effort to produce. User created metadata is a third approach, and this paper focuses on grassroots community classification of digital assets. One form of explicit user created metadata was popularized in the late 1990’s with link-‍focused websites called weblogs (Blood 2000). Tagging Content in Del.icio.us and Flickr Del.icio.us ( henceforth referred to as “Delicious”) is a tool to organize web pages. “a social bookmarks manager. Delicious is not unique or pioneering in its role as bookmarks manager. From Tags to Folksonomy