How language can affect the way we think 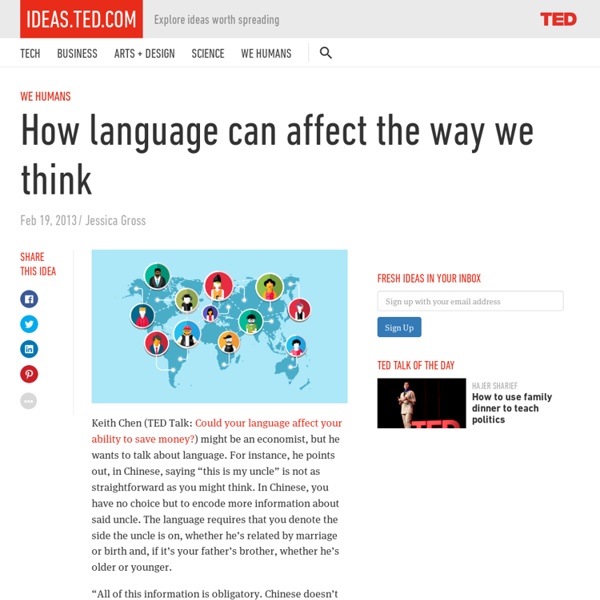 Keith Chen (TED Talk: Could your language affect your ability to save money?) might be an economist, but he wants to talk about language. For instance, he points out, in Chinese, saying “this is my uncle” is not as straightforward as you might think. In Chinese, you have no choice but to encode more information about said uncle. The language requires that you denote the side the uncle is on, whether he’s related by marriage or birth and, if it’s your father’s brother, whether he’s older or younger. “All of this information is obligatory. This got Chen wondering: Is there a connection between language and how we think and behave? While “futured languages,” like English, distinguish between the past, present and future, “futureless languages” like Chinese use the same phrasing to describe the events of yesterday, today and tomorrow. But that’s only the beginning. Featured illustration via iStock.

Mouth clicks used in human echolocation captured in unprecedented detail Like some bats and marine mammals, people can develop expert echolocation skills, in which they produce a clicking sound with their mouths and listen to the reflected sound waves to "see" their surroundings. A new study published in PLOS Computational Biology provides the first in-depth analysis of the mouth clicks used in human echolocation. The research, performed by Lore Thaler of Durham University, U.K., Galen Reich and Michael Antoniou of Birmingham University, U.K., and colleagues, focuses on three blind adults who have been expertly trained in echolocation. Since the age of 15 or younger, all three have used echolocation in their daily lives.

50 Questions To Help Students Think About What They Think click 2x contributed by Lisa Chesser Using the right questions creates powerful, sometimes multiple answers and discussions. Aristotle said that he asked questions in response to other people’s views, while Socrates focused on disciplined questioning to get to the truth of the matter. Ultimately questions spark imagination, conjure emotions, and create more questions. The questions asked by a teacher or professor are sometimes more glaringly valuable than the information transferred to the students. Those questions spark a thought, which leads to a fiercely independent search for information.

Kill the Password: Why a String of Characters Can't Protect Us Anymore You have a secret that can ruin your life. It’s not a well-kept secret, either. Just a simple string of characters—maybe six of them if you’re careless, 16 if you’re cautious—that can reveal everything about you. Your email. Your bank account. Your address and credit card number. Zero Historical scientists categorize the types of number systems peoples use, much the same way philologists break down languages into "analytic," "agglutinative," "inflectional," etc. The path that leads to the discovery of "0" lies only in the most advanced type of number system, which is called "positional" because the value of a character depends on its position. Our modern way of counting is positional. The base figure "5" has a different value in 514 and in 145, determined by its position. The Romans, Greeks, Hebrews (and Aztecs and pre-Islamic Arabs and a great many others) used an "additive" system, which is fundamentally a transcription of counting.

My Shoes This EFL lesson plan is designed around a short film called My Shoes by Nima Raoofi, and the themes of envy and empathy. Students write a story, watch a short film, talk about empathy and envy, discuss comments on a YouTube video , and practise idiomatic expressions. Language level: Intermediate (B1) – Upper Intermediate (B2) Learner type: Teens and adults How we discovered three poisonous books in our university library Some may remember the deadly book of Aristotle that plays a vital part in the plot of Umberto Eco’s 1980 novel The Name of the Rose. Poisoned by a mad Benedictine monk, the book wreaks havoc in a 14th-century Italian monastery, killing all readers who happen to lick their fingers when turning the toxic pages. Could something like this happen in reality? Poisoning by books? Our recent research indicates so. We found that three rare books on various historical topics in the University of Southern Denmark’s library collection contain large concentrations of arsenic on their covers.

Kanji of the year, meaning 'disaster,' symbolizes 2018 amid natural and human calamities KYOTO – The kanji sai (災, disaster) was picked as the Chinese character best describing this year’s social mood in Japan, amid a string of natural and man-made calamities, a Kyoto-based kanji promotion organization announced Wednesday. Chief Buddhist priest Seihan Mori of the Kiyomizu Temple in Kyoto wrote the character 1.5 meters in length and 1.3 meters in width with a giant calligraphy brush on traditional washi paper at the temple’s annual year-end event, where the kanji of the year was revealed. The selection came after Japan was buffeted this year by torrential rains in the country’s west and an large earthquake in Hokkaido, heightening public awareness of the importance of disaster prevention measures. Japan was also rocked by man-made calamities such as stolen cryptocurrencies and the uncovering of harassment by coaches in the athletic world. The selection of the word was based on characters put forward by the general public.

25 Helpful Websites for Creative Writers Jun 08, 2011 Need help getting your creative juices flowing? These websites for creative writers offer grammar tips, writing prompts, peer critiques and advice on getting published. Read on to learn how you can strengthen your creative writing on the Web. General Writing