On or Off grid energy 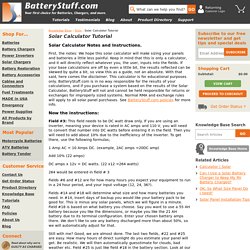 First, the notes: We hope this solar calculator will make sizing your panels and batteries a little less painful. Keep in mind that this is only a calculator, and it will directly reflect whatever you, the user, inputs into the fields. If your base calculations are off by even a little bit, the results reflected can be skewed by quite a bit, so view this as a guide, not an absolute. With that said, here comes the disclaimer. What Appliances Can You Power With Solar. You can power many different devices from: 1. 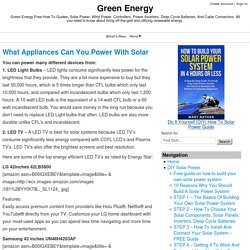 LED Light Bulbs – LED lights consume significantly less power for the brightness that they provide. They are a bit more expensive to buy but they last 50,000 hours, which is 5 times longer than CFL bulbs which only last 10,000 hours, and compared with incandescent bulbs which only last 1,200 hours. A 10 watt LED bulb is the equivalent of a 14 watt CFL bulb or a 60 watt incandescent bulb. You would save money in the long run because you don’t need to replace LED Light bulbs that often. 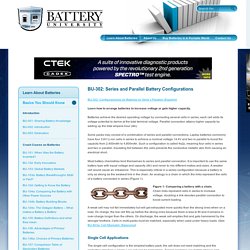 Battery packs achieve the desired operating voltage by connecting several cells in series; each cell adds its voltage to the total terminal voltage. Parallel connection attains higher capacity for increased current handling; each cell adds to the ampere/hour (Ah) count. Some packs may consist of a combination of serial and parallel connections. Laptop batteries commonly have four 3.6V Li-ion cells in series to achieve 14.4V and two in parallel to boost the capacity from 2,400mAh to 4,800mAh. Such a configuration is called 4S2P, meaning four cells in series and two in parallel. Most battery chemistries lend themselves to serial and parallel connection.

A weak cell may not quit immediately but will get exhausted more quickly than the strong ones when in continued use. Single Cell Applications. Patent US8933665 - Balancing voltages between battery banks - Google Patents. This application is a continuation-in-part of, and hereby claims priority under 35 U.S.C. §120 to, pending U.S. patent application Ser. 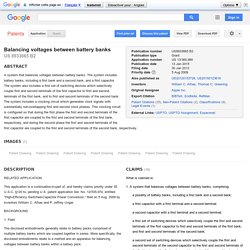 Free-Energy Devices, zero-point energy, and water as HHO fuel. Home Made Pelton Wheel. Sizing Your Solar System. Homemade Battery! - The DIY "Earth Battery" - Powers Clocks/Watches/Calcs/LED Lights.... Build a DIY Portable Solar Power Generator For Under $150. Want to build your own portable solar power generator to take with you on camping trips or for use in an emergency? 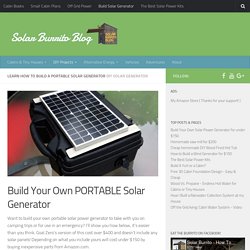 I’ll show you how below, it’s easier than you think. Goal Zero’s version of this cost over $400 and doesn’t include any solar panels! Depending on what you include yours will cost under $150 by buying inexpensive parts from Amazon.com. How portable do you want your solar generator to be? Think about how heavy and large it should be?

Video showing components: The Container. DIY VAWT. In this project, we will build a small DIY VAWT, Vertical Axis Wind Turbine. We are not expecting to get much over 50 watts of production, though it would be fairly simple to double the size of the blade area to increase power. This DIY VAWT is based on the use of 4 inch PVC pipes, cut in half, for the blades. The blades are mounted on bicycle rims. This structure is then mounted using 2x4's and a DC treadmill motor is connected at the bottom, via a belt. The belt connection allows for an increase in RPMs to the treadmill motor. We have just started this project and have concerns with the following: start-up wind speed required - the gearing required to increase the RPMs for the treadmill motor, could prevent the wind turbine form starting, till very high wind speeds are reached gearing ratio - will a belt gearing system give us the revolutions per minute (RPM) that we need to produce usable power? 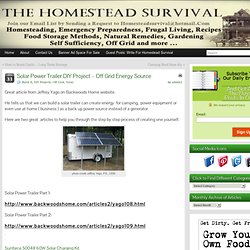 He tells us that we can build a solar trailer can create energy for camping, power equipment or even use at home ( business ) as a back up power source instead of a generator. Here are two great articles to help you through the step by step process of creating one yourself. photo credit Jeffrey Yago, P.E., CEM. How To Build DIY Solar Panels Out of Pop-Cans. At the end, the solar absorber is painted black and placed in the diy solar panels casing. 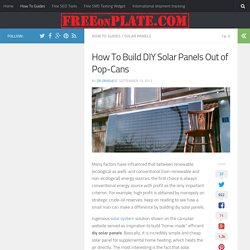 The casing is covered with plexiglass that we attach to the frame and thoroughly corked with silicone. 7 Solar Water Heating System Designs. How To Build Cheap WINDBELT Generator using VHS tape. Picture 10 picture 11 The Key Advantages of Windbelt over existing micro-wind turbine technology is not only the cost but simplicity and also the fact that it is good at taking power from turbulent wind flows, i.e. in a built up domestic setting, and it is also very quiet in operation. 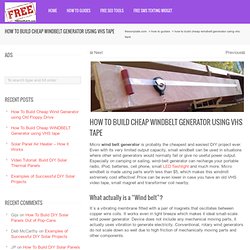 Unlike PV solar panels, wind turbine generators do not scale down so well. While large wind turbines can generate huge quantities of electricity very efficiently and relatively cheaply, as the size of the wind turbine is reduced, efficiency reduces and cost per generated watt jumps quite enormously. DIY Solar Oven - DIY Solar Network.