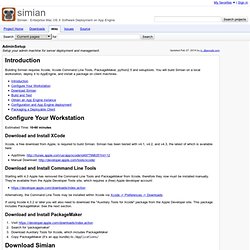 You will build Simian on a local workstation, deploy it to AppEngine, and install a package on client machines. OS X Daily - News and Tips for Mac, iPhone, iPad, and Everything Apple. Der Flounder. Bypassing the Mavericks managed preferences login check With the release of 10.9, a number of Mac admins began seeing an Updating Managed Settings message appear at the login window. 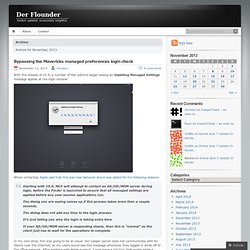 When contacted, Apple said that this was new behavior and it was added for the following reasons: Starting with 10.9, MCX will attempt to contact an AD/OD/MDM server during login, before the Finder is launched to ensure that all managed settings are applied before any user session applications run.The dialog you are seeing comes up if this process takes more than a couple seconds.The dialog does not add any time to the login process.It’s just telling you why the login is taking extra time.If your AD/OD/MDM server is responding slowly, then this is “normal” as the client just has to wait for the operations to complete. Osxdaily/bash_profile. OS X Mountain Lion 10.8.3 VMware Image w/ AMD Support. Disclaimer: All work shared in this post is property of ©2013 Soul Dev Team. 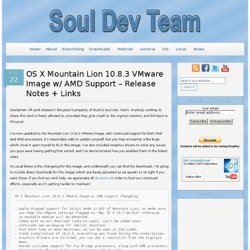 Anybody wishing to share this work is freely allowed to, provided they give credit to the original creators, and link back to this post. I’ve now updated to the Mountain Lion 10.8.3 VMware Image, with continued support for both Intel and AMD processors. It’s reasonably safe to update yourself, but you may encounter a few bugs which I took it upon myself to fix in this image.

I’ve also included Graphics drivers to solve any issues you guys were having getting that sorted, and I’ve demonstrated how you enabled them in the linked video. As usual below is the changelog for this image, and underneath you can find the downloads. 22 top tools for professional Apple Mac admins. The Community of iOS Administrators. Welcome — ps Enable. Covering Apple IT - Forums. Mac Admin Corner - Apple system deployments, imaging, packaging, management and Active Directory integration tips. Mountain Lion Server tutorials. Open Source Tools to Manage Macs in the Enterprise - Munki, Simian, Cauliflower Vest. Open Source Tools to Manage Macs in the EnterpriseMunki, Simian, and Cauliflower Vest: Three open source tools to help IT pros manage Mac computers in the enterprise. 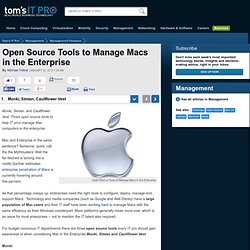 Mac and Enterprise in the same sentence? Someone, quick, call the the Mythbusters! Well the far-fetched is turning into a reality.Gartner estimates enterprise penetration of Macs is currently hovering around five-percent. As that percentage creeps up, enterprises need the right tools to configure, deploy, manage and support Macs. Technology and media companies (such as Google and Walt Disney) have a large population of Mac users and their IT staff have been working hard to manage Macs with the same efficiency as their Windows counterpart. For budget conscious IT departments there are three open source tools every IT pro should gain awareness of when considering Mac in the Enterprise:Munki, Simian and Cauliflower Vest.

Munki Munki is a python-based toolset that provides for managed software installation of OS X systems. Centralizing user/group management for Mac OSX with Zentyal. I have been following Zentyal since their eBox days, and Samba 4 since 2006. 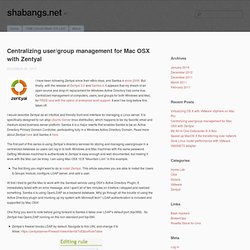 But finally, with the release of Zentyal 3.0 and Samba 4, it appears that my dream of an open source and drop-in replacement for Windows Active Directory has come true. MacWindows: The Source for Macintosh-Windows integration. Michael Kuron's Blog. MacIT 2013 Sessions - Justin Rummel . com. For my fifth year in a row, I’ll be presenting at Macworld|MacIT conference in January of 2013! 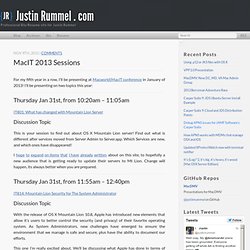 I’ll be presenting on two topics this year: Thursday Jan 31st, from 10:20am – 11:05am IT801: What has changed with Mountain Lion Server Discussion Topic. IT's guide to managing Macs in the OS X Lion era. Building Mac test environments with VMWare Fusion, NetBoot and DeployStudio. When new software appears, Mac admins need test boxes that match their standard configuration in order to verify that the new software doesn’t adversely affect anything in their environment. 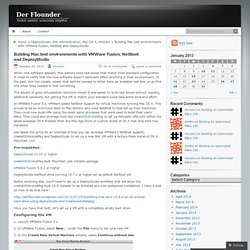 In the past, this has usually meant that admins needed to either have an available test box, or go find one when they needed to test something. The advent of good virtualization solutions meant it was easier to build test boxes without needing additional hardware, but getting the VM to match your standard could take some time and effort. In VMWare Fusion 5.x, VMWare added NetBoot support for virtual machines running Mac OS X. Mac 10.7 Lion Server Tutorials. ScheyenIAm. Pattern Buffer: Managing OS X. Yes to Lion, no to cruft: get a clean start with manual Mac migration. I got my first Mac, an iBook, in 2002. 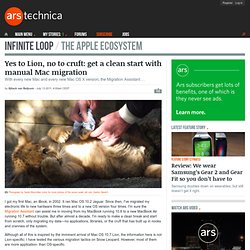 It ran Mac OS 10.2 Jaguar. Since then, I've migrated my electronic life to new hardware three times and to a new OS version four times. I'm sure the Migration Assistant can assist me in moving from my MacBook running 10.6 to a new MacBook Air running 10.7 without trouble. But after almost a decade, I'm ready to make a clean break and start from scratch, only migrating my data—no applications, libraries, or the cruft that has built up in nooks and crannies of the system. OSX Tips: Setting-up a new Mac from an old one, its backups, or a PC Using Migration Assistant on Mountain Lion or Lion. Migration Assistant is used primarily to transfer user account(s) and perhaps other things, from one Mac, its backups, or a PC, adding them to a Mac that's already set up. 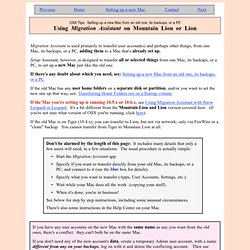 Setup Assistant, however, is designed to transfer all or selected things from one Mac, its backups, or a PC, to set up a new Mac just like the old one. MacOSX Tips Troubleshooting. From Mac Guides Updates 11Oct- Added MacRumor Thread regarding DNS spoofing under the Phishing Section. 24Sept- Added section on downloading Web (You Tube) Videos with cross reference to "Video-Downloading from Web Sites" MacRumors Guide. 26Aug- Added Problem Mac Programs section. 18June- Added Phishing section and links for other MacOSX guides. 12June- Added info on taking DVD screenshots on your Mac in the How To Section. 25Mar- Reorganized the Mountain Lion section and added info about purging tied up memory. 20Mar- Added transition to Mountain Lion section. 17Feb13- Added section on Indexing and how to turn it off. 11Feb13- Added several Time Machine links. 14Oct12- Added Time Machine section, link. 9Sep12- Added Info for adding a second display to a MacBookPro, MacBook Air. 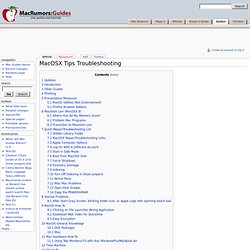 Resolving Kernel Panics. The "You need to restart your computer" alert indicates a kernel panic. This FAQ, based on the "Kernel Panics" chapter of our book Troubleshooting Mac® OS X, provides a set of procedures which should resolve most kernel panics. Additional information, including how to use and interpret panic logs for troubleshooting, can be found in the "Kernel Panics" chapter of Troubleshooting Mac OS X. Before you begin... The procedures defined herein constitute a testing road map and should be followed in the order specified. Read this FAQ thoroughly before proceeding in order to familiarize yourself with the steps and assure you have the necessary resources available. Causes of kernel panics General causes of kernel panics.

Managing OS X. Creating an imaging workflow. Starting Out Here at Technology Operations, we make use of the built-in tool System Image Utility to build our images. We previously used InstaDMG, but InstaDMG was a really clunky solution that was difficult to work with and especially difficult for others to learn. When Snow Leopard was released, we made the decision that we'd try to do as much as possible with SIU, and it's worked out wonderfully for us so far. First, pop your Mac OS X Install DVD (it has to be a Snow Leopard DVD or higher) into the machine you're running SIU from. The journal of Apple technology. Volume Number: 26 Issue Number: 10 Column Tag: MacEnterprise By Greg Neagle, MacEnterprise.org Introduction.

Mac doesn't boot. From Mac Guides Introduction I decided to write this because there are several threads about this posted everyday and I got tired to write the same things to do over and over again. I hope this helps but I cannot guarantee that this will fix your issue. Please, remember to back up frequently. What does it do? Can you hear the fans and hard drive and see the white boot screen? Flashing question mark [2]: This is usually a sign of a failed hard drive. What to do. Printer Repair. The HP LaserJet 4250 (4350) is a solid fast printer with a long lifespan and has a good price per print. There has been an unfortunate trend with many new laser printers that add wireless and new air print or cloud print options, which are nice, but at the same time shortchanging the more important price per page and toner capacity. Technical Support & How-Tos - Cult of Mac. How To Fix Common Mac Startup Problems [MacRx. Clues to the causes of Mac startup problems can be found by analyzing when in the boot process the system fails.

Troubleshooting a Slow Mac - Provider Wiki. From Provider Wiki Generally Macs don't require much in the way of maintenance to keep them running.