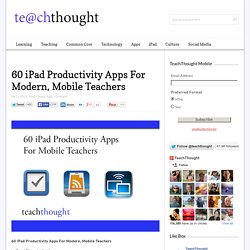 Simply put: Teachers. Don’t. Have. Assessment design. Grading. Data extraction. Which is what planning periods are for, yes? But technology may be able to help. From RSS readers to social readers to to-do lists to calendar apps to note-taking and cloud-based document editing and more, this list has to have something that can improve the efficiency of what you do. Assuming you have an iPad. Appkataloget. iPad-apps til brug i skolen. The Best iOS Apps for Students and Teachers. Ipad i skolen - inspiration til undervisning fra CFU. 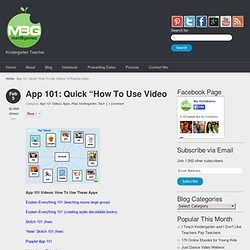 How an Under-Appreciated iOS 7 Feature Will Change the World. A curious download hit Apple’s app store this week: a messaging app called FireChat. 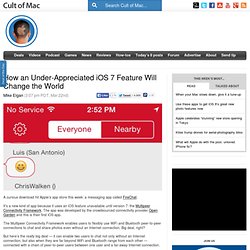 It’s a new kind of app because it uses an iOS feature unavailable until version 7: the Multipeer Connectivity Framework. The app was developed by the crowdsourced connectivity provider Open Garden and this is their first iOS app. The Multipeer Connectivity Framework enables users to flexibly use WiFi and Bluetooth peer-to-peer connections to chat and share photos even without an Internet connection. Big deal, right? Pin by Lisa Johnson  on iPad Lessons. A Comprehensive Guide for Effective Use of iPad in Teaching. iPad, this mystic gadget that has been making the news since its launch a few years ago, has now secured a strong foothold inside different educational settings. 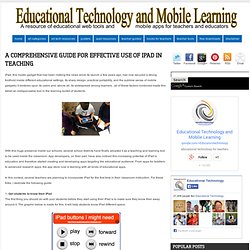 Its sharp design, practical portability, and the sublime sense of mobile gadgetry it bestows upon its users and, above all, its widespread among learners , all of these factors combined made this tablet an indispensable tool in the learning toolkit of students. With this huge presence inside our schools, several school districts have finally adopted it as a teaching and learning tool to be used inside the classroom. App developers, on their part, have also noticed this increasing potential of iPad in education and therefore started creating and developing apps targeting the educational audience. From apps for toddlers to advanced research apps, the app store now is teeming with all kinds of educational apps. In this context, several teachers are planning to incorporate iPad for the first time in their classroom instruction. Storyline. RIKT -Ressurs for IKT. What Teachers Need to Know about AirDrop. The new iOS 7 has brought about several new features to the overall functionality and feel of iPad. 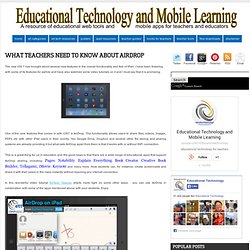 I have been tinkering with some of its features for awhile and have also watched some video tutorials on it and I must say that it is promising. One of the new features that comes in with iOS7 is AirDrop. This functionality allows users to share files, videos, images, PDFs..etc with other iPad users in their vicinity. Yes Google Drive, Dropbox and several other file storing and sharing systems are already providing it but what sets AirDrop apart from them is that it works with or without WiFi connection. This is a great thing for us in education and the good news is that there are a wide range of educational apps that support AirDrop sharing including: Pages, Notability, Explain Everything, Book Creator, Creative Book Builder, Tellagami, iMovie, Keynote and many more. Keyboard Shortcuts and Typing Tips for your iPad, iPhone or iPod Touch. Master these keyboard shortcuts to speed up touch typing on your iPad, iPhone or iPod Touch. 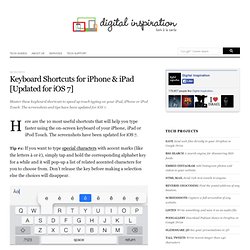 The screenshots and tips have been updated for iOS 7. Here are the 10 most useful shortcuts that will help you type faster using the on-screen keyboard of your iPhone, iPad or iPod Touch. The screenshots have been updated for iOS 7. Tip #1: If you want to type special characters with accent marks (like the letters à or è), simply tap and hold the corresponding alphabet key for a while and it will pop-up a list of related accented characters for you to choose from.

Don’t release the key before making a selection else the choices will disappear. Tip #2: When you are done typing a sentence, double-tap the space bar on the keyboard and it will automatically insert a dot (or period) followed by a space. Tip #3: The iOS keyboard is pretty smart at adding apostrophes. Apps. Den ultimate tastaturguiden for Mac « Martin Bekkelund. Apple & Mac En av tingene som forandrer seg når man går fra Windows til Mac, er tastaturet. 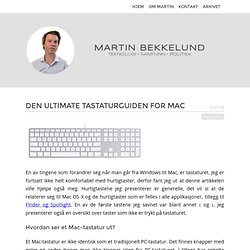 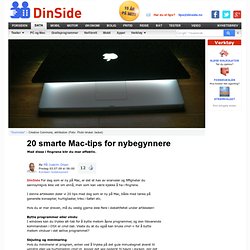