Mac Tips You Will Need 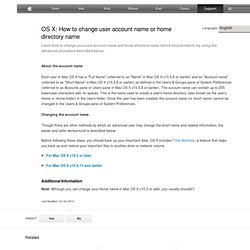 Create a New iCloud email? How to Change the Short Name of a User Account in Mac OS X. Changing your Mac’s Computer Name. Someone recently asked me how to change their Mac’s computer name because they were annoyed by the extra lengthy default in the ‘Computer Name’ screensaver. 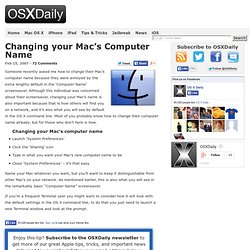 Use An Xbox 360 Controller On Your Mac [OS X Tips. After we reported on Steam’s new Big Picture beta coming to the Mac, we got a reader question that I figured it’d be good to write a tip on. 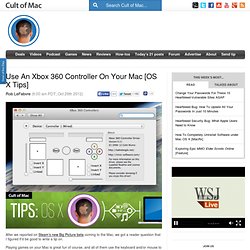 Playing games on your Mac is great fun of course, and all of them use the keyboard and/or mouse to control the games being played. However, with AirPlay mirroring, HDMI cable support, and a bunch of new games showing up for the Mac platform along their Windows brethren, there are times when a console style controller is a better alternative. Being able to sit on the couch and play our favorite Mac games has a lot to recommend it, and using an Xbox controller is fairly easy to set up. Here’s how. First of all, you’ll need an Xbox controller, wired or wireless with the Microsoft wireless adapter. Secondly, head over to TattieBogle, and download the driver for OS X there. Now, plug in the Xbox 360 wired controller. Use A Playstation 3 Controller On Your Mac With Bluetooth [OS X Tips. Yesterday, we showed you how to use an XBox 360 controller on your Mac, using a wired controller. 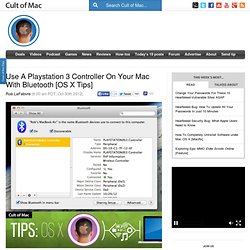 We’re pretty sure it will work with the wireless controller and a Microsoft wireless adapter, as well, but we weren’t able to test it. Getting the most out of Game Center. Gaming has become an increasingly popular part of what we do with our Macs and iOS devices, and Apple finally realized that. 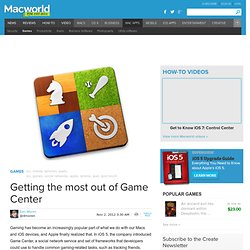 In iOS 5, the company introduced Game Center, a social network service and set of frameworks that developers could use to handle common gaming-related tasks, such as tracking friends, accruing achievements, and playing multiplayer games. How to free up iCloud storage space. When Apple introduced iCloud in 2011, it announced that every customer with an Apple ID would receive 5GB of iCloud storage space for free. 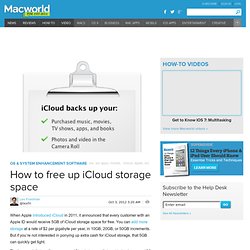 You can add more storage at a rate of $2 per gigabyte per year, in 10GB, 20GB, or 50GB increments. "Remember Me/Keep Me Logged In" Checkbox being skipped - AgileBits Forums. How to set up your addresses in Messages. When you set up the Messages app in iOS or OS X, you must supply it with an active Apple ID. 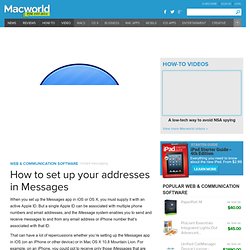 But a single Apple ID can be associated with multiple phone numbers and email addresses, and the iMessage system enables you to send and receive messages to and from any email address or iPhone number that’s associated with that ID. That can have a lot of repercussions whether you’re setting up the Messages app in iOS (on an iPhone or other device) or in Mac OS X 10.8 Mountain Lion. For example, on an iPhone, you could opt to receive only those iMessages that are directed at its phone number. Use Bluetooth to tether your iPhone, iPod touch, or iPad. You should know by now that an iPhone of the right vintage can be turned into a mobile hotspot—a portable router that pumps out a Wi-Fi signal on one side and talks to a mobile 3G broadband network on the other. 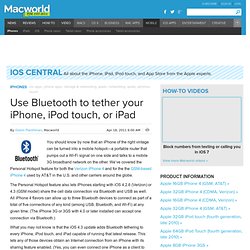 We’ve covered the Personal Hotspot feature for both the Verizon iPhone 4 and for the the GSM-based iPhone 4 used by AT&T in the U.S. and other carriers around the globe. The Personal Hotspot feature also lets iPhones starting with iOS 4.2.6 (Verizon) or 4.3 (GSM model) share the cell data connection via Bluetooth and USB as well. All iPhone 4 flavors can allow up to three Bluetooth devices to connect as part of a total of five connections of any kind (among USB, Bluetooth, and Wi-Fi) at any given time. (The iPhone 3G or 3GS with 4.0 or later installed can accept one connection via Bluetooth.) What you may not know is that the iOS 4.3 update adds Bluetooth tethering to every iPhone, iPod touch, and iPad capable of running that latest release. How to enable Web Sharing in OS X Mountain Lion. The Sharing services in OS X allow for a number of connectivity options, including screen sharing, file sharing, printer sharing, and the capability to use your computer as an Internet router. 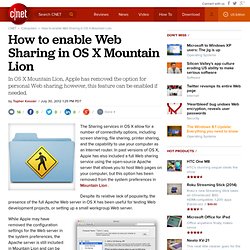 In past versions of OS X, Apple has also included a full Web sharing service using the open-source Apache server that allows you to host Web pages on your computer, but this option has been removed from the system preferences in Mountain Lion . Despite its relative lack of popularity, the presence of the full Apache Web server in OS X has been useful for testing Web development projects, or setting up a small workgroup Web server. While Apple may have removed the configuration settings for the Web server in the system preferences, the Apache server is still included in Mountain Lion and can be enabled for those who need it.

The steps for enabling this include optionally configuring the server for hosting Web pages in the "Sites" folder in your home directory, and then enabling the server itself. Collect3.com.au/hiss/ Cancel Downloads from the Mac App Store. While clarifying the instructions on how to re-download Mac OS X Lion from the App Store I discovered a neat little trick; you can cancel downloads. 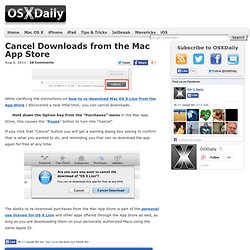 Hold down the Option key from the “Purchases” menu in the Mac App Store, this causes the “Pause” button to turn into “Cancel”