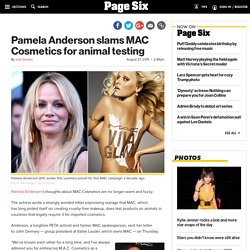 The actress wrote a strongly worded letter expressing outrage that MAC, which has long prided itself on creating cruelty-free makeup, does test products on animals in countries that legally require it for imported cosmetics. Anderson, a longtime PETA activist and former MAC spokesperson, sent her letter to John Demsey — group president at Estée Lauder, which owns MAC — on Thursday. “We’ve known each other for a long time, and I’ve always admired you for embracing M.A.C.

Cosmetics as a pioneer in cruelty-free makeup. That’s why I was so proud to be a Viva Glam M.A.C. girl in 2004,” she wrote. “When I worked with M.A.C., I found it to be a very progressive and forward-thinking company. MAC acknowledged its practice of having its products tested on animals in China, where it’s required by law for imported cosmetics.

Anderson, 48, urged the company to stop selling in China, noting she has “faith” in the brand. MAC Cosmetics Is No Longer Cruelty Free - Logical Harmony. For a long time, one of the most well-known cruelty free brands has been MAC Cosmetics. 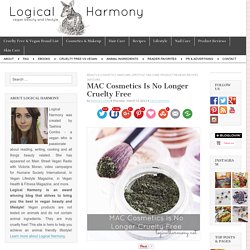 It was also a common rumor in the vegan community that all their products are also vegan. Sadly, MAC Cosmetics is no longer cruelty free. Estée Lauder, Clinique & M.A.C Are No Longer Cruelty-Free – Je t'aime by Hotashi. I just found out the unfortunate news from Nika from Pirouette Makeup on her latest video. 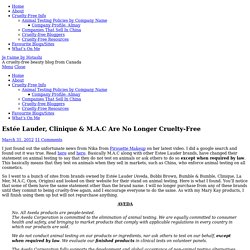 I did a google search and found out it was true. Read here and here. Basically M.A.C along with other Estee Lauder brands, have changed their statement on animal testing to say that they do not test on animals or ask others to do so except when required by law. This basically means that they test on animals when they sell in markets, such as China, who enforce animal testing on all cosmetics. So I went to a bunch of sites from brands owned by Estée Lauder (Aveda, Bobbi Brown, Bumble & Bumble, Clinique, La Mer, M.A.C, Ojon, Origins) and looked on their website for their stand on animal testing. No. Pamela Anderson slams MAC Cosmetics for animal testing. MAC Cosmetics Is No Longer Cruelty Free - Logical Harmony. Search for Cruelty-Free Companies. The list includes companies that make cosmetics, personal-care products, household-cleaning products, and other common household products. 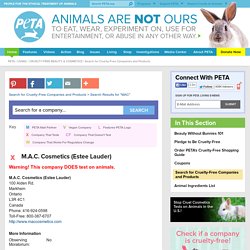 In the U.S., no law requires that these types of products be tested on animals, and companies can choose not to sell their products in countries such as China, where tests on animals are required for cosmetics and other products. Companies on this list should be supported for their commitment to manufacturing products without harming any animals. Companies that aren't on this list should be boycotted until they implement a policy that prohibits animal testing. The list does not include companies that manufacture only products that are required by law to be tested on animals (e.g., pharmaceuticals and garden chemicals). Although PETA is opposed to all animal testing, our quarrel in those instances is less with the individual companies and more with the regulatory agencies that require animal testing. MAC AIDS FUND. What kind of a company ignites its charity program by selling lipstick with RuPaul, a drag queen as its spokesperson? 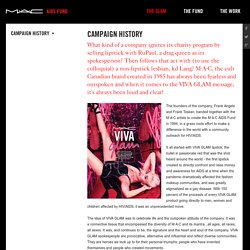 Then follows that act with (to use the colloquial) a non-lipstick lesbian, kd Lang? M·A·C, the cult Canadian brand created in 1985 has always been fearless and outspoken and when it comes to the VIVA GLAM message, it's always been loud and clear! MAC Cosmetics. Strobing Is the New Contouring. Here's How to Do It Without Looking Like a Hot Mess. Getty Images Advertisement - Continue Reading Below What is strobing, you ask? 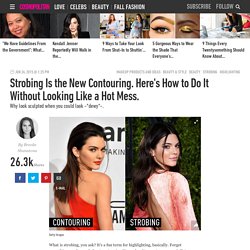 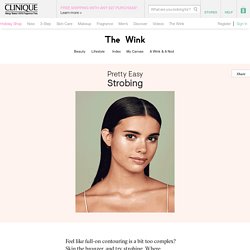 Skip the bronzer, and try strobing. Where contouring adds sculpting shadows to your features, strobing amps them up with high-voltage highlighting—and naturally pretty results. Not to mention, it has much less room for error; all you need is an emollient moisturizer and some strategically placed highlighter. And skin looks next-level dewy. Horrible Mac Experience. 60 Second Beauty Tip. The Brand - KIKO MAKE UP MILANO - KIKO. KIKO MILANO was established and founded in 1997 by Percassi. 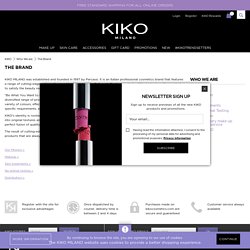 It is an Italian professional cosmetics brand that features a range of cutting-edge makeup, face and body treatments. Safe and effective products of the highest quality, created to satisfy the beauty requirements of women of any age. "Be What You Want to Be. " This is how KIKO sums up its vision of Beauty. Through its extraordinarily wide and diversified range of products, KIKO allows everyone to express their own personality with custom-made products. KIKO's identity is rooted in "Made in Italy" values and the world of the capital for fashion, art and design. The result of cutting-edge scientific discoveries and the latest fashion trends, KIKO continuously renews itself with products that are always new and closer to the multiple ideals of beauty. Latest beauty trends from Avon. Untitled. Color Sensational® Pearls. Urban Decay. 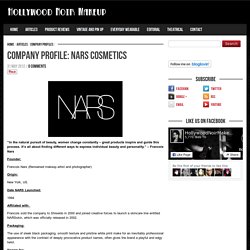 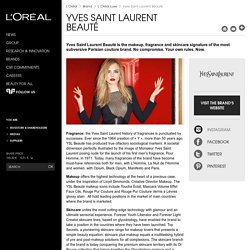 More than long lasting, quality makeup, MAC runs a Back to MAC recycling program that reduces their waste and encourages consumers to bring back their empty containers in exchange for new products. With social and environmental initiatives they’ve created, this brand of makeup has made attempts to find a better shade of green in an industry where beauty produces an excessive amount of waste. Making sustainability beautiful with MAC cosmetics « BizEnergy. Women's Makeup Throughout History. New EU data protection law to arrive in 2015. The European Union has indicated that the widely-awaited General Data Protection Regulation (GDPR) will come to fruition before the end of the year. In a lengthy blog post issued yesterday, which was the ninth European Data Protection Day, vice president Andrus Ansip and Commissioner Vera Jourova said that the reforms would bring EU's data protection practices into the modern era. “Citizens and businesses are waiting for the modernisation of data protection rules to catch up with the digital age,” they said in a statement.

“New technologies are emerging fast and have enormous potential for our society and economy. This potential can only be fully realised if people can trust the way their personal data is used. Ensuring trust will allow the European Digital Single Market to live up to its full potential. “EU Data Protection reform also includes new rules for police and criminal justice authorities when they exchange data across the EU. Right to 30-day refund becomes law. Image copyright Thinkstock New consumer protection measures - including longer refund rights - have come into force under the Consumer Rights Act. For the first time anyone who buys faulty goods will be entitled to a full refund for up to 30 days after the purchase. Convert British Pound Sterling to Canadian Dollar. EU referendum: the pros and cons of Britain leaving the EU. On 23 June, the UK will settle a question that's been rumbling close to the surface of British politics for a generation: should the country remain within the European Union, or leave the organisation and go it alone.

Both sides insist that the outcome of the vote will settle the matter of Britain's EU membership for the foreseeable future. How we got here The Conservative election victory last year activated a manifesto pledge to hold an in/out referendum on Britain's membership of the European Union by the end of 2017. David Cameron made the promise of an EU referendum at a time when he was under pressure from Eurosceptic backbenchers within his own party – and when the Tories appeared to be losing votes to Ukip. Most political commentators agree that, given a free hand, he would not have wanted a referendum, and that he is now desperate to secure Britain's place in the EU.

So what are the advantages and disadvantages of being a part of Europe? The pros and cons of leaving the EU Trade. David Cameron will outlaw any rise in VAT, income tax and NI for five years. Prime Minister will put tax at the heart of Conservative's pitch for electionMajor speech will unveil his commitment to change the law within 100 daysIt commits a Conservative government to 'five-year tax lock' on re-electionThe announcement is designed to increase pressure on Labour over tax By James Chapman Political Editor For The Daily Mail Published: 22:59 GMT, 28 April 2015 | Updated: 04:58 GMT, 29 April 2015.

MAC Lipstick Drugstore Dupes + Lip Swatches 2015. Organization: Research & Innovation, Production, Distribution-L’Oréal Group. Key figures: brands, employees, sales-L’Oréal Group. M·A·C Cosmetics. MAC: Better Customer Service. MAC breaks my heart. A bit of a different post today, but I wanted to talk to you all about my experiences with MAC shop assistants. Eyelash Extensions - Christoph Eye Couture. Permanent Makeup: Is Tattooing The New Beauty Trend? : BEAUTY : Beauty World News. Get the Most Popular Beauty World News Stories in a Weekly Newsletter Imagine you went to bed with your makeup on. Now picture the next morning and you can skip adding a drop of lipstick or an ounce of eyeliner and mascara to your face. You could sleep in and pop outta bed ready for the day with your makeup perfectly in place.

Sound like every beauty junkie's fantasy? Well this life could be yours thanks to the art of permanent makeup. Permanent Makeup. Caitlyn Jenner Is Not the New Face of Mac Cosmetics—It’s Ellie Goulding! 'The Lipstick Effect': Women Spend More On Beauty Products During Recessions, Study Says. The Lipstick Effect - How Recessions Reveal Female Mating Strategy  Businessinsider. Lipstick Effect Definition. Untitled. Untitled. Mac Cosmetics. MAC Cosmetics - Official Site. Colour Cosmetics Social Engagement Report. MAC Cosmetics' social media strategy triumphs over L'Oreal, Benefit and Chanel. Our study, the Colour Cosmetics Social Engagement Report analyses the social media strategies of 20 of the UK’s most recognisable cosmetic brands including MAC, Clinique, L’Oreal, Chanel, Benefit, Estee Lauder, Clarins, Dior, Maybelline and Lancome. Uniquely, the report doesn’t just rank the brands that produce the greatest volume of content or have the largest following but looks at how brands engage with their customers, where they engage with them and how brands are benefiting from this engagement.

MAC Cosmetics was revealed as the runaway leader, dominating the colour cosmetics sector due to the seamless integration between its social channels and brand website. It has a highly targeted content strategy that is fulfilling the needs of consumers, earning shares and interactions on the key social media platforms including Facebook, Twitter and YouTube. Official UK Site. A brief history of M.A.C. Social Responsibilities - MAC Cosmetics. M.A.C. Cosmetics Mar 100/081: Week 3 - Ethics and Social Responsibility.