The Internet of Things (and the myth of the “Smart” Fridge) Tower - The most powerful Git client for Mac. Balsamiq. Take a second. 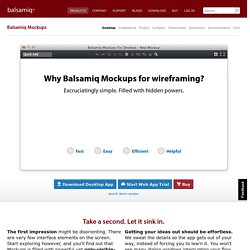 Let it sink in. The first impression might be disorienting. There are very few interface elements on the screen. Start exploring however, and you'll find out that Mockups is filled with powerful yet only-visible-when-you-need-them features. Getting your ideas out should be effortless. We've been in business long enough that we think we have learned enough about ourselves, our product, our customers and our competitive space to be able to put a stake in the ground and tell the world what we're about. Our sweet spot: the ideation phase Mockups really shines during the early stages of designing a new interface. Mockups is zenware, meaning that it will help you get "in the zone", and stay there. Mockups offers the same speed and rough feel as sketching with pencil, with the advantage of the digital medium: drag & drop to resize and rearrange elements, make changes without starting over, and your work is clear enough that you'll make sense of them later.

Skin: iMZDL: iOS 7 & OS X 10.9 — Your source for iOS and OS X betas! YouTube Video Converter and Download - ClipConverter.cc. How to Reveal Your Library Folder in Lion or Mountain Lion. Did you know that you will find Library folders in three locations on your Mac? 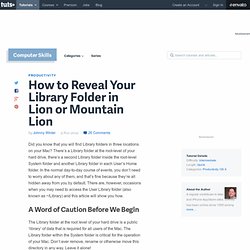 Temporary or Permanent? There are two modes of revealing the ~/Library folder. Create a Shortcut. Tmux. Mac OS Terminal Replacement. The Ultimate Beginner's Guide To AppleScript. This is the first post in a new series that revisits some of our readers' favorite posts from the past that still contain awesome and relevant information that you might find useful. 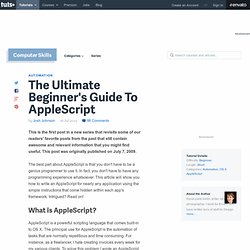 This post was originally published on July 7, 2009. The best part about AppleScript is that you don't have to be a genius programmer to use it. In fact, you don't have to have any programming experience whatsoever. This article will show you how to write an AppleScript for nearly any application using the simple instructions that come hidden within each app's framework.

Intrigued? What is AppleScript? AppleScript is a powerful scripting language that comes built-in to OS X. The Main Window Getting Started: The Tell Block To create an AppleScript, open the application "Script Editor" located inside the AppleScript folder within the Applications folder. [applescript] tell application "Finder" 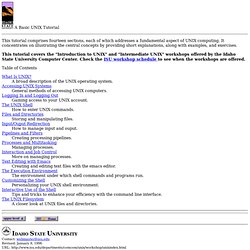 It concentrates on illustrating the central concepts by providing short explanations, along with examples, and exercises. This tutorial covers the "Introduction to UNIX" and "Intermediate UNIX" workshops offered by the Idaho State University Computer Center. Check the ISU workshop schedule to see when the workshops are offered. Table of Contents What Is UNIX? A broad description of the UNIX operating system. Accessing UNIX Systems General methods of accessing UNIX computers. Logging In and Logging Out Gaining access to your UNIX account.

The UNIX Shell How to enter UNIX commands. Files and Directories Storing and manipulating files. Input/Ouput Redirection How to manage input and ouput. Pipelines and Filters Creating processing pipelines. Processes and Multitasking Managing processes. Interaction and Job Control More on managing processes. Text Editing with Emacs. How to Print Screen on a Mac. What is known as “Print Screen” in the Windows world is called screen captures or screen shots in Mac OS X. 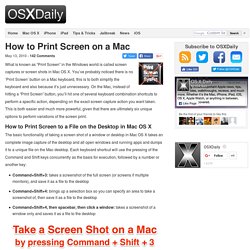 You’ve probably noticed there is no ‘Print Screen’ button on a Mac keyboard, this is to both simplify the keyboard and also because it’s just unnecessary. On the Mac, instead of hitting a “Print Screen” button, you’ll hit one of several keyboard combination shortcuts to perform a specific action, depending on the exact screen capture action you want taken. This is both easier and much more powerful, given that there are ultimately six unique options to perform variations of the screen print.

How to Print Screen to a File on the Desktop in Mac OS X.