The Mac App Store Now Requires All New Apps To Play In The Sandbox. Growing up, playing in the sandbox was a midday reprieve, a privilege, a pastime. 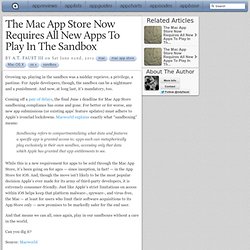 For Apple developers, though, the sandbox can be a nightmare and a punishment. And now, at long last, it’s mandatory, too. Coming off a pair of delays, the final June 1 deadline for Mac App Store sandboxing compliance has come and gone. For better or for worse, any new app submissions (or existing apps’ feature updates) must adhere to Apple’s ironclad lockdowns. Macworld explains exactly what “sandboxing” means: Sandboxing refers to compartmentalizing what data and features a specific app is granted access to; apps each can metaphorically play exclusively in their own sandbox, accessing only that data which Apple has granted that app entitlements to see. While this is a new requirement for apps to be sold through the Mac App Store, it’s been going on for ages — since inception, in fact! And that means we can all, once again, play in our sandboxes without a care in the world. 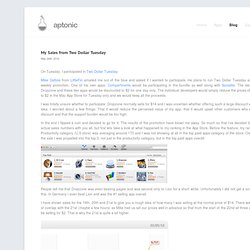 Mike Dattolo from LittleFin emailed me out of the blue and asked if I wanted to participate. He plans to run Two Dollar Tuesday as a regular weekly promotion. One of his own apps, Compartments would be participating in the bundle as well along with Socialite. The idea was that Dropzone and these two apps would be discounted to $2 for one day only. The individual developers would simply reduce the prices of their apps to $2 in the Mac App Store for Tuesday only and we would keep all the proceeds.

I was totally unsure whether to participate. In the end I flipped a coin and decided to go for it. People tell me that Dropzone was even beating pages and was second only to Lion for a short while. I have shown sales for the 19th, 20th and 21st to give you a rough idea of how many I was selling at the normal price of $14. As you can see, I sold over 6700 copies as a result of the sale. Apple’s Mac App Store tops 100 million downloads. Mac App Store downloads don’t include Lion, updates or downloads to other Macs. Earlier today Apple released download figures for the Mac App Store. 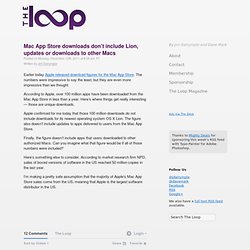 The numbers were impressive to say the least, but they are even more impressive than we thought. According to Apple, over 100 million apps have been downloaded from the Mac App Store in less than a year. Here’s where things get really interesting — those are unique downloads. Apple confirmed for me today that those 100 million downloads do not include downloads for its newest operating system OS X Lion. The figure also doesn’t include updates to apps delivered to users from the Mac App Store. Finally, the figure doesn’t include apps that users downloaded to other authorized Macs. Here’s something else to consider. An Interview With Sparrow's Dominique Leca About The Mac App Store And Sparrow For iPhone. A look at the Mac App Store, two months after Lion launched. In mid-July, a week before Apple launched OS X Lion, I took a look at the Mac App Store. 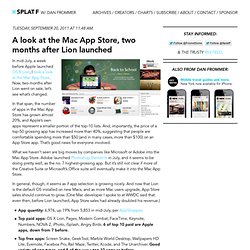 Now, two months after Lion went on sale, let’s see what’s changed. In that span, the number of apps in the Mac App Store has grown almost 20%, and Apple’s own apps represent a smaller portion of the top-10 lists. And, importantly, the price of a top-50 grossing app has increased more than 40%, suggesting that people are comfortable spending more than $50 (and in many cases, more than $100) on an App Store app. That’s good news for everyone involved. What we haven’t seen are big moves by companies like Microsoft or Adobe into the Mac App Store.

In general, though, it seems as if app selection is growing nicely. Four Lessons From Evernote’s First Week On The Mac App Store. Editor’s note: The following guest post is written by Phil Libin, CEO of Evernote, which is currently the No. 5 app in the Mac App Store. 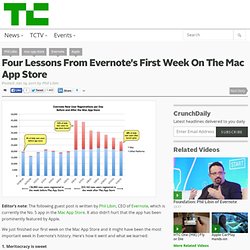 It also didn’t hurt that the app has been prominently featured by Apple. We just finished our first week on the Mac App Store and it might have been the most important week in Evernote’s history. Here’s how it went and what we learned: 1. Meritocracy is sweet I remember one of the first computer articles that I ever read (maybe it was in Byte Magazine in the early 80s while I was in junior high).

The following twenty or thirty years brought us monopolies and barriers to entry and this happy state of affairs became a dim memory. Over the past year, about 70% of Evernote’s new users came from mobile app stores, mostly iOS and Android.