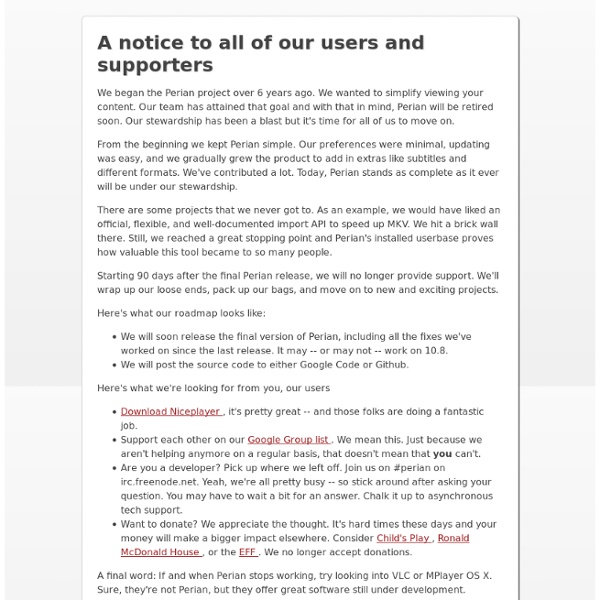 A notice to all of our users and supporters We began the Perian project over 6 years ago. We wanted to simplify viewing your content. Our team has attained that goal and with that in mind, Perian will be retired soon. Our stewardship has been a blast but it's time for all of us to move on. From the beginning we kept Perian simple.

Index of /ftp/AirPlay AirPlayer. Transform your Mac into an AirPlay-compatible display. AirFlick Serve files and URLs to Apple TV Bruce Display time, day, local weather, RSS-feeds, or live screen shots on ATV, among other features AirVideo Client Bare-bones way to watch your AirVideo Server-supplied video on a Mac. Harder Than It Looks: How to Make a Great Stop Motion Animation Ever find yourself watching a great little stop motion animation and thinking, “Hey, I could do that?” What’s that? You made one with some friends in middle school? Great! Maybe you should bang one out tomorrow morning, slap it up on YouTube, and brace yourself for the onslaught of public adoration that’s so damnably difficult to avoid when one’s creation becomes a viral sensation overnight. Hold your horses, Gumby.

Mac Gems: Little Snitch snitches on misbehaving apps Our Macs can be chatty even when we wish they weren’t. Apps, and even the OS itself, regularly reach out to the rest of your local network and to the Internet to probe, query, and blab. Little Snitch 3 intercepts these requests and presents them to you for inspection and approval.

Many Tricks · Witch Witch 3 now lets you assign Command-Tab and Shift-Command-Tab (or Command-`) as the Witch activation keys. Set up in this manner, Witch replaces the Command-Tab application switcher. Witch 3 also mimics some of the Command-Tab switcher's functionality. When you press H (hide) or Q (quit) with Witch active, the action occurs immediately, as it does with Command-Tab. Witch adds more useful when-active keystrokes, too: M to minimize a window, Z to zoom it to full screen, and W to close it. In addition, A and Shift-A will jump by application (instead of moving window-by-window), J and K will move the selection down and up (as in vi), T and B (or Home and End) will jump to the top or bottom of the panel.

“Fixing” kernel_task CPU Problems in MacOS Lion 10.7 Update (Early 2013): When I wrote this guide it was focusing on Lion 10.7, many people have, of course, upgraded to 10.8 and have reported success using the same principles. However, the plist entries have not been added for newer models, e.g. the new MacBook Air or MacBook Pro (+retina). Therefore, if you follow the guide exactly you may run into problems such as your model identifier not being visible. After diagnosing this with others via email it would appear that the system uses another plist in the directory, therefore removing all of the plists has worked.

Mac DVD Ripper Guide - How to rip DVD on Mac X and edit DVD movie on Mac OS X? This step-by-step guide will show you how to use Aimersoft DVD Ripper for Mac to rip general DVD (copy-protected included) on Mac OS X (Leopard Supported). It will include two parts: 1. How to rip DVD to MP4, MOV, AVI, MPEG, 3GP, FLV, M4V, MP3, AAC, APE on Mac OS X 2. How to edit, crop, trim, join DVD clips on Mac OS X niceplayer - fullscreen, borderless multi-engine player This program aims to be a multi-engine player designed for playing movies nicely for a person who likes to watch or present movies on their computer (such as the casual viewer or the video artist). This program features full screen or border-less floating windows, convenient controls for scrubbing or queuing movies, and on the fly playlist creation. Features

Little Snitch A firewall protects your computer against unwanted guests from the Internet. But who protects your private data from being sent out? Little Snitch does! Protect your privacy Network Monitoring Redefined Time Machine: Setup on and restore from a NAS device - Mac OS X This hint explained how to set up a network attached storage (NAS) device as a Time Machine backup. To make this process easier, I've created an AppleScript that makes the creation and setup a one-step process -- just drag and drop your mounted NAS onto the following AppleScript to ready the drive for Time Machine use. ...