LEGO Craftmanship of the Day: Erickson S-64 Air-Crane Helicopter. LEGO bonsai tree by Makoto Azuma. Images courtesy azuma makoto | click to enlarge We’ve seen our fair share of bonsai (everything from the inflatable to the hangable) but, oddly enough, we’ve never seen one made from everyone’s favorite building block, LEGOs. 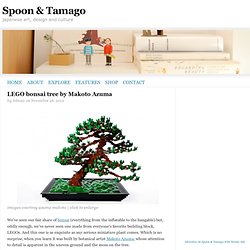 And this one is as exquisite as any serious miniature plant comes. Which is no surprise, when you learn it was built by botanical artist Makoto Azuma, whose attention to detail is apparent in the uneven ground and the moss on the tree. Source: Azuma Makoto Related posts. LEGO Craftsmanship of the Day: Great Ball Contraption. Tom poulsom: LEGO bird man. Aug 24, 2012 tom poulsom: LEGO bird man ‘norman the northern cardinal’ bristol-based LEGO builder and artist, tom poulsom, has spoken with designboom regarding his ‘LEGO bird project’. having already built over 20 birds, poulsom plans to build a series of birds from each continent around the globe, as well as a few additional series including the flightless, endangered and tropical varieties. the sculptures began with one of his favorite birds, the robin red breast, and gathered momentum from that point on, with the venture aiming to make both children and adults aware of the importance of birds through a creative medium. 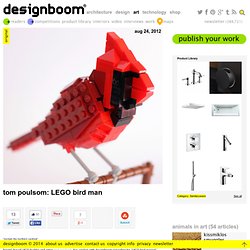 Designboom speaks with the artist further about his work. LEGO Architecture Fallingwater Residence by Frank Lloyd Wright. The popular LEGO Architecture series has spawned some incredible sets including the Sydney Opera House, Villa Savoye, and even the White House.

Even with all of these spectacular sets, our favorite is still the LEGO Architecture Fallingwater. The Fallingwater property, designed all the way back in 1934, was designed by Frank Lloyd Wright, and is quite possibly the most famous residential home in the entire world. This highly detailed LEGO set replicates the organic architecture style of blending man with the surrounding landscape that is Frank Lloyd Wright’s signature style.

Designed and created by Madrid, Spain based civil engineering student Sheepo, this LEGO creation is a 1:8.5 scale replica of the iconic Defender we all know and love. This thing isn’t just for show either. Built from a whopping 2,800 parts it runs on 7 different motors and 3IR receivers. You can pilot the all wheel drive LEGO Land Rover Defender replica with an RF controller built from LEGOs. This fully equipped remote control vehicle reaches a top speed of 2.5 miles per hour. Children Collaborate to Build 1.8 million LEGO Map of Japan. My Modern Metropolis Children Collaborate to Build 1.8 million LEGO Map of Japan The reason that LEGOs are such awesome toys for kids is because they are not only fun, they inspire kids to build whatever their hearts desire by using their problem solving skills and ingenuity. 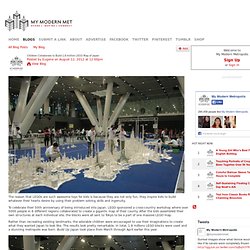 Animated Movie Character LEGO Mosaics by Ryan McNaught. LEGOs have always been a source of inspiration, and it’s always incredible just to see what these building blocks are capable of when the idea is fueled by a creative mind.

One of our favorite LEGO builders, Ryan McNaught, is back at it again with something a bit different in these animated movie inspired mosaic pieces. After recently presenting the World’s First LEGO Colosseum, we now take a look at a project that Ryan McNaught created for his two boys. These mosaics were made entirely from LEGOs and feature several different characters including Mike Wazowski from Monsters Inc., Despicable Me Minon from Despicable Me, Lightning McQueen from Cars, and Megamind from Megamind.

DIY LEGO chess game board and pieces. A couple months ago my son and I were going through the enormous tub of LEGOs, trying to decide what to do with them. 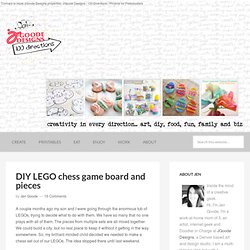 We have so many that no one plays with all of them. The pieces from multiple sets are all mixed together. We could build a city, but no real place to keep it without it getting in the way somewhere. So, my brilliant minded child decided we needed to make a chess set out of our LEGOs. The idea stopped there until last weekend. Tropical Lego Birds. Ornithological LEGO master Tom Poulsom has followed up his wonderful British bird series with a new set of tropical birds featuring macaws, hummingbirds, finches and more. 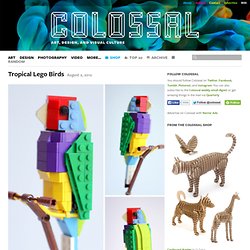 Poulsom says he’s well on his way in gaining enough support on the LEGO CUUSOO site to turn some of these birds into commercially produced models but needs a few more votes. I think I would honestly buy the entire set, so help me help Tom help me and give him a vote and imagine me giving you a giant eHigh-five. LEGO Olympic Stadium Made From 100,000 Bricks. Though the Lego Colosseum still stands as the most impressive Lego creation we've ever seen, this Lego Olympic Stadium is right up there. 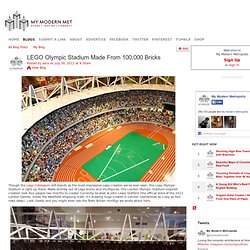 Made entirely out of Lego bricks and minifigures, this London Olympic Stadium-inspired creation took four people two months to create! Currently located at John Lewis Statford (the official store of the 2012 London Games, inside the Westfield shopping mall), it's drawing huge crowds in London (sometimes as crazy as four rows deep). Look closely and you might even see the Team Britain minifigs we wrote about here.

World's First Lego Colosseum Made of 200,000 Bricks. Wow, the level of detail in this is amazing! 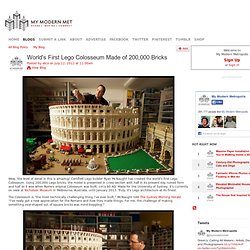 Interior Design with Art and 20,000 Legos: A Modern Home Renovation. In 1994 Artist Melissa Marks and Interface designer Vicente Caride purchased and inhabited their 1,500-square-foot New York home. The open floor plan was inviting and exciting, but their now 10-year-old son was getting a bit too old for an open room.

He needed a door, but he probably never imagined that his need for a room of his own and a love of legos would translate to a renovation revolving around the building blocks. The redesign took collaborative efforts from I Beam Architecture and Design and Lego Engineer Sean Kenney—one of five people in the country (and one of two in New York) licensed by the Lego company for intense building projects. Kenney built the wall using design instruction from I Beam, who mapped out the stairs, wall and Mondrian-inspired openings and windows based on Lego dimensions—dots.

Amazing Life Size LEGO Forest Installation In Australia. The long standing LEGO brand is celebrating 50 years this year, and in celebration of their successes throughout their business the “Festival of Play” was born. Part of that incorporates a life-sized installation in Australia. The sparse Broken Hill desert has been updated for the next couple of weeks with some ‘greenery’ in the form of large scale legos.

In place of the dirt covered grounds, there are life-sized pine trees and flowers– with the trees towering over 13 feet tall. Zoo Filled with Life-Sized LEGO Animal Sculptures. I love building and creating with LEGOs, so I was thrilled to learn about this LEGO exhibit at Reiman Gardens in Ames, Iowa. Included in the gardens are 27 life-sized LEGO sculptures, featuring animals like fox, fish, frogs, rabbits, flowers, butterflies, and more! The complex sculptures were built and installed as a part of Sean Kenney's traveling exhibition, Nature Connects.

Using nearly half a million LEGO pieces, Kenney uses what is generally considered a child's toy to build these contemporary sculptures. A LEGO man boldly goes where few regular men have gone before. Earlier this year, two Toronto high school students, Mathew Ho and Asad Muhammad, launched a tiny LEGO man to the very edges of space itself. Thankfully the crafty duo strapped a camera to the balloon, allowing us to enjoy the LEGO man’s epic journey. Near the apex of the journey, the familiar blue sky gives way to an inky black, just before the balloon bursts and Ho’s and Muhammad’s rig starts its descent. The video and equipment eventually were recovered after falling back down to Earth.An astrophysicist at the University of Toronto, Michael Reid, said what Ho and Muhammad were able to achieve is extraordinary. “There are people that are doing it, but I haven’t seen many examples of 17-year-old kids doing it,” Reid said. LEGO Monster Fighters Haunted House. LEGO has come a long way since their first interlocking toy brick back in 1949.

Over the past 60 plus years the brand has flourished, and is instantly recognized by millions across the globe. The brand is looking to continue development on their popular Monster Fighters Collection by adding the first official Haunted House to the roster for 2012, a set that includes over 2,000 pieces. These spooky boarded up LEGO mansion is equipped with three floors, and even comes staffed with six live in residents that include a vampire and vampire’s bride, a Zombie chef to prepare meals, a butler Frankenstein, and of course 2 glow in the dark ghosts. The LEGO house will hit the retail scene for $180 in September just in time for Halloween. Emeeme: Mindplay - parykker av Legos. ¿Os gustaría tener una peluca hecha con piezas de Lego?

If you are already proficient at jewelry making with beads, you will find this project a breeze. I recently came across this funny definition… Feet (noun): A device used for finding Legos in the dark. SocialMedia / Lego. Mindblowing Lego art. Mrs. Easton » Blog Archive » Lego Love. The Fox Is Black » The Millenium Falcon constructed with 3D Legos in 3 minutes. I know you guys love Legos, so I had to share this video created by Francisco Prieto, who’s created a 3D modeled version of the Lego Millenium Falcon. Taking over 3 years, Francisco created the video with 3DS Max and V-Ray, using 3,572,568 polygons and 670 hours of rendering time. To say this was a serious undertaking would be an understatement, clearly Francisco loves him some Legos and Star Wars. This is kind of magical to behold, especially the detailing that goes into the upper portions of the ship. I’ve also realized I would never want to try and build one of these for myself, I’d probably go nuts.

Orion Pax"'s Photostream. Brick Collections. Largest private LEGO collection in the world. Lego Minifig in Space of the Day. Lego Minifigs in Space of the Day. Doctor Who. Lego Pictures - Ultimate Factories. LEGO-Log. New Prints Hot Off the Lego Letterpress by Physical Fiction. Lego-slide1.jpg (580×352) Brickd - a blog featuring the best in Lego design. LEGO Saturn V Rocket. Official Lego Site. The Cult of LEGO. By Maria Popova Inside the world of 8 quadrillion possible combinations. Who doesn’t love LEGO? (I certainly have a soft spot, and even believe it to be an apt metaphor for combinatorial creativity.) Impressive Lego Sculpture of Albert Einstein. This past October, Legoland Florida opened to the public, targeting families with children ages 2 to 12.

With about 50 million bricks used, it is the fifth and largest Legoland in the world with 50 attractions in 10 themed areas. According to Legoland Florida Master Builder Jason Miller, two of the biggest construction projects at the park were a brontosaurus near the park's entrance and a bust of Albert Einstein which greets visitors at the Imagination Zone, each of which required six to seven builders working for four months to complete. Bad ass LEGO Tattoo – Pilot Extra-fine. LEGO Firearms Actually Shoot LEGO Bricks (16 pics) Jack Streat’s LEGO firearms are cool enough to look at, but the fact they actually work makes them uber-cool. 8 Incredible LEGO Mods - The Most Incredible LEGO Models Ever Constructed.