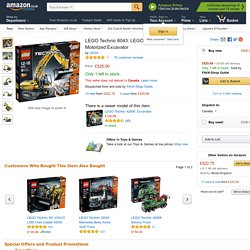 Expert teenage builders would probably throw it together in a matter of hours, it took me nine days of evening work. It became a matter of principle to finish it! I was on a tight deadline as my son kept asking me if it was going to be finished before we went to visit Legoland. The pressure I was under was immense. It is without doubt the most complex piece of Lego engineering I have ever seen, it would probably be easier to build the real thing. Once the build is complete you will have to invest heavily in 12 batteries to provide the power to test your building skills.

Finally the day arrived for the test, batteries installed checks completed. There is also the option of downloading the instructions for a second build that can be made. Please do not let my son see this! If you have a budding engineer in the family this is a must buy must have. Amazon.co. Amazon.co. LEGO Technic 42009 Mobile Crane MKII Review - LEGO Reviews & Videos.

The LEGO 42009 Mobile Crane MKII is the biggest LEGO Technic set ever released, with more than 2,500 parts that will keep you building for several hours. 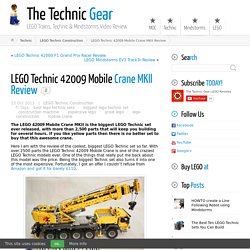 If you like yellow parts then there is no better set to buy that this awesome crane. Here I am with the review of the coolest, biggest LEGO Technic set so far. With over 2500 parts the LEGO Technic 42009 Mobile Crane is one of the craziest LEGO Technic models ever. One of the things that really put me back about this model was the price. Being the biggest Technic set also turns it into one of the most expensive. So let’s review it. 42054 CLAAS XERION 5000 TRAC VC - Products - LEGO® Technic - LEGO.com - Technic LEGO.com. 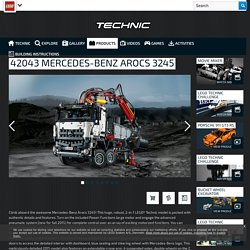 This huge, robust, 2-in-1 LEGO® Technic model is packed with authentic details and features. Turn on the included Power Functions large motor and engage the advanced pneumatic system (new for fall 2015) for complete control over an array of exciting motorized functions. You can operate the ultra-versatile crane arm mechanism, open and close the grabber, extend the outriggers or raise and lower the tipper body! Twin axle steering, double differential drive and fully independent suspension provide ultimate maneuverability, and the driver’s cab tilts to reveal a detailed 6-cylinder engine with moving pistons. Open the cab doors to access the detailed interior with dashboard, blue seating and steering wheel with Mercedes-Benz logo. 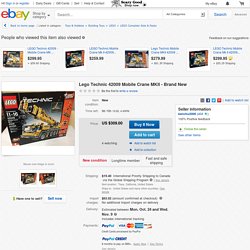 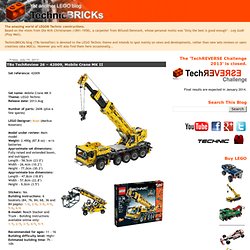 This review was preceded by a few live building sessions, that were streamed online and you may have eventually followed. If it was not the case, you may still find some of recordings at TechnicBRICKs Live Stream Channel. This model has caused some expectations among the fans, because with over 2600 parts, it is the largest LEGO Technic set released so far. So everyone is curious to see how it performs as we have already seen some of the largest sets struggling to have its functions moving seamlessly. This is also a model designed by one of the most known LEGO Technic designers, Markus Kossman, who had designed some of he most mythical sets in the recent past years, and also designed the 8421, Mobile Crane XL in 2005, with 1884 parts. 1.

With the traditional large card box with lift-up cover, this set comes with the usual LEGO Technic flagship type box. The electrical functions are: 2. 3. 4. Week TechVideo, 2009 #37 - Dump Truck 10x4. Han has finished another awesome model of his own creation. 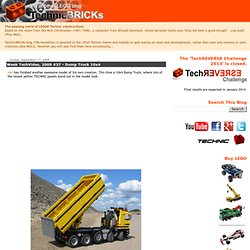 This time a 10x4 Dump Truck, where lots of the recent yellow TECHNIC panels stand out in the model look. Apart the TECHNIC functions this model includes some other details, like: Cabin opening for motor access, open & close cabin doors, adjustable wind-deflector, dashboard with coffee machine and cups, fuel tanks, air compressor and air filter units between the wheels, fire extinguisher, exhaust pipe, and many other... 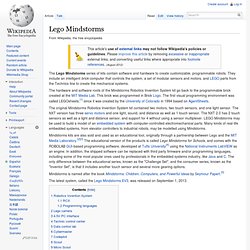 They include an intelligent brick computer that controls the system, a set of modular sensors and motors, and LEGO parts from the Technics line to create the mechanical systems. The original Mindstorms Robotics Invention System kit contained two motors, two touch sensors, and one light sensor. The NXT version has three servo motors and one light, sound, and distance as well as 1 touch sensor. The NXT 2.0 has 2 touch sensors as well as a light and distance sensor, and support for 4 without using a sensor multiplexer. LEGO Mindstorms may be used to build a model of an embedded system with computer-controlled electromechanical parts. Mindstorms is named after the book Mindstorms: Children, Computers, and Powerful Ideas by Seymour Papert.[5] The latest system, called the Lego Mindstorms EV3, was released on September 1, 2013. 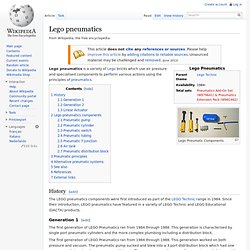 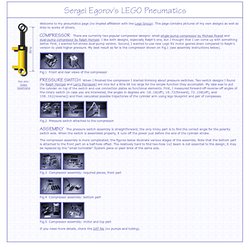 This page contains pictures of my own designs as well as links to works of others. There are currently two popular compressor designs: small single-pump compressor by Michael Powell and dual-pump compressor by Ralph Hempel. I like both designs, especially Ralph's one, but I thought that I can come up with something better. First, I wanted full-stroke dual-pump version. Second, I wanted to use new Lego 9V motor geared down compared to Ralph's version to yield higher pressure. Fig.1 Front and rear views of the compressor When I finished the compressor I started thinking about pressure switches. Fig.2 Pressure switch attached to the compressor The pressure switch assembly is straightforward; the only tricky part is to find the correct angle for the polarity switch axle. Lego RC Tow Truck: 12 Pounds of Technic, 14 Functions, 1 Truck. Lego Technic 8043 Pneumatic MOD. Lego(r) Remote Controlled Backhoe Loader. LEGO TECHNIC CAMION 8258 + REMORQUE.