Definitive Guide for Android Applications Used to Control Mindstorms NXT Robots. Some time ago the phones were used only for communication while the tablets were not even invented. 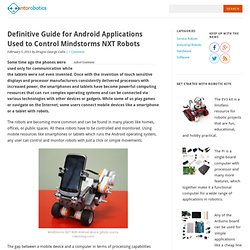 Once with the invention of touch sensitive displays and processor manufacturers consistently delivered processors with increased power, the smartphones and tablets have become powerful computing resources that can run complex operating systems and can be connected via various technologies with other devices or gadgets. While some of us play games or navigate on the Internet, some users connect mobile devices like a smartphone or a tablet with robots. The robots are becoming more common and can be found in many places like homes, offices, or public spaces.

All these robots have to be controlled and monitored. Using mobile resources like smartphones or tablets which runs the Android operating system, any user can control and monitor robots with just a click or simple movements. Controlling LEGO Mindstorms NXT using OpenCV on Android. Components Integrating useful things to develop some new stuff is a fun. 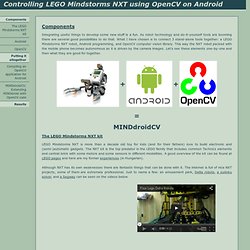 As robot technology and do-it-yourself tools are booming there are several good possibilities to do that. What I have chosen is to connect 3 stand-alone tools together: a LEGO Mindstorms NXT robot, Android programming, and OpenCV computer vision library. Aegidius Pluess) NxtJLib. Learning OOP with robotics (NEW: Support for Lego Mindstorms EV3. 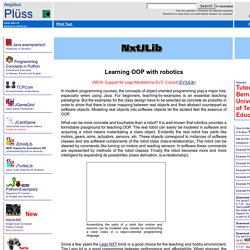 Consult EV3JLib) In modern programming courses, the concepts of object oriented programming play a major role, especially when using Java. For beginners, teaching-by-examples is an essential teaching paradigma. But the examples for the class design have to be selected as concrete as possible in order to show that there is close mapping between real objects and their abstract counterpart as software objects. What can be more concrete and touchable than a robot? Bluetooth-Verbindung zwischen NXT und Smartphone. Www.appinventor.org/apps/robot-remote/robot-remote.pdf. LEGO MINDSTORMS. These components provide control of LEGO® MINDSTORMS® NXT robots using Bluetooth. 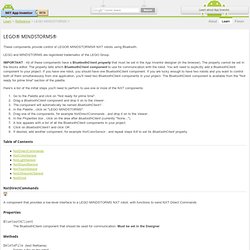 LEGO and MINDSTORMS are registered trademarks of the LEGO Group. IMPORTANT : All of these components have a BluetoothClient property that must be set in the App Inventor designer (in the browser). Wiki.tinyclr.com/images/d/df/LEGO_MINDSTORMS_NXT_Direct_commands.pdf. Jacek Fedoryński's blog: Face tracking robot. Android 4.0 introduced an API for face detection. 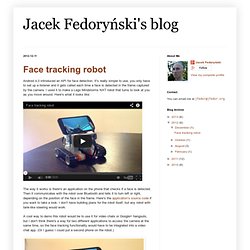 It's really simple to use, you only have to set up a listener and it gets called each time a face is detected in the frame captured by the camera. I used it to make a Lego Mindstorms NXT robot that turns to look at you as you move around. Here's what it looks like: The way it works is there's an application on the phone that checks if a face is detected. Then it communicates with the robot over Bluetooth and tells it to turn left or right, depending on the position of the face in the frame. A cool way to demo this robot would be to use it for video chats or Google+ hangouts, but I don't think there's a way for two different applications to access the camera at the same time, so the face tracking functionality would have to be integrated into a video chat app. Download Lego NXT Remote for Mac - Control a Lego Mindstorms NXT robot from your Mac. NXT Remote Control. PID Controller For Lego Mindstorms Robots.

A PID Controller is a common technique used to control a wide variety of machinery including vehicles, robots and even rockets. 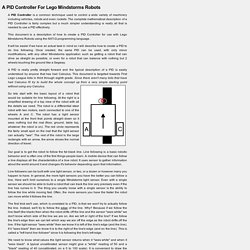 The complete mathematical description of a PID Controller is fairly complex but a much simpler understanding is really all that is needed to use a PID effectively. This document is a description of how to create a PID Controller for use with Lego Mindstorms Robots using the NXT-G programming language. It will be easier if we have an actual task in mind so I will describe how to create a PID to do line following. 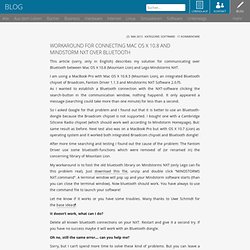 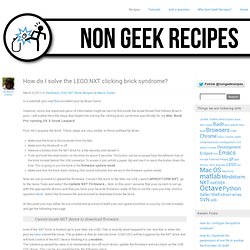 However, since one important piece of information might be hard to find inside the email thread that follows Brian’s post, I will outline here the steps that helped me solving the clicking brick syndrome specifically for my Mac Book Pro running OS X Snow Leopard. First, let’s prepare the brick. These steps are very similar to those outlined by Brian: Programming B.O.B (Lego Mindstorms NXT) in not-exactly C on MacOS / OSX. NXC in Xcode on Mac. How does it work? 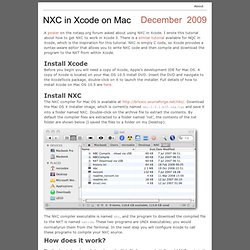 The Xcode window shown below shows the Makefile for a sample Helloworld NXC project. You can add source files into the source folder in the left-hand Groups & Files pane by right-clicking and selecting New File... Bluetooth.docx. Programmable Brick Utilities. Programmable Brick Utilities NOTE: You must have the Fantom drivers installed in order for any of my NXT utilities to function under Mac OSX and Windows. 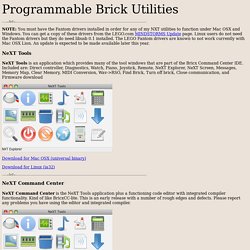 You can get a copy of these drivers from the LEGO.com MINDSTORMS Update page. Linux users do not need the Fantom drivers but they do need libusb 0.1 installed. The LEGO Fantom drivers are known to not work currently with Mac OSX Lion. An update is expected to be made available later this year. NeXT Tools NeXT Tools is an application which provides many of the tool windows that are part of the Bricx Command Center IDE. Download for Mac OSX (universal binary) Download for Linux (ia32) NeXT Command Center NeXT Command Center is the NeXT Tools application plus a functioning code editor with integrated compiler functionality. Download for Mac OSX (universal binary) Download for Linux (ia32) NeXTScreen NeXTScreen is a Windows program which lets you view the NXT screen on your PC. Download NeXTExplorer Download NeXTTool. NXT Line Follower.

Before line following using either the LineFollow2 or LineFollow5 program, you should "calibrate" the light sensor to the actual conditions expected. With the sensor mounted on the robot where it will be used, and the robot placed over the actual line it will be following, a calibration process takes two light sensor readings, one directly over the line (minimum = darkest), and one over the surface away from the line (maximum = brightest). The NXT will then adjust the numbers reported by the light sensor so that the minimum value expected will be reported as 0 and the maximum as 100.

The results of light sensor calibration are remembered until you calibrate again, even after the NXT is turned off (the results are stored in a data file in the NXT's memory), so you only need to calibrate once each time your conditions change. Then you can run your robot as many times as you want without needing to calibrate before each run.