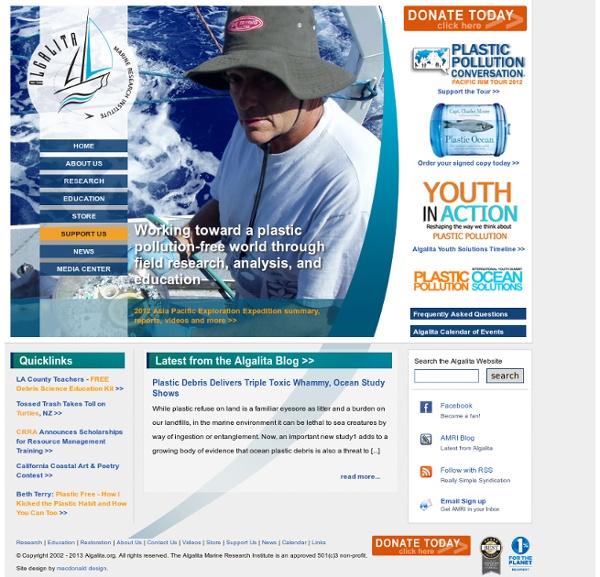 Plastic Pollution Trash Free Seas People know that trash in the water: compromises the health of humans, wildlife and the livelihoods that depend on a healthy ocean;threatens tourism and recreation, and the critical dollars they add to our local economies;complicates shipping and transportation by causing navigation hazards; andgenerates steep bills for retrieval and removal. Unfortunately, what we see dirtying beaches and floating on the ocean’s surface is just the tip of the iceberg. Much more lies unseen beneath the surface and far away on the open water — but that doesn’t make it any less important. That’s why Ocean Conservancy is taking bold action, working to stop the flow of trash at the source, before it has a chance to reach the water to choke and entangle dolphins or endanger sea turtles, or ruin our beaches and depress our local economies. We need your help to keep millions of pounds of trash from our oceans - your everyday choices can help keep it clean. A Movement for Trash Free Seas

Plastic pollution Plastic waste at Coco Beach in India. Types[edit] Plastic pollution on plants. Plastic pollution occurs in many forms, including but not limited to littering, marine debris (man-made waste that has been released in a lake, sea, ocean, or waterway), plastic particle water pollution, plastic netting and Friendly Floatees. A large percentage of plastic produced each year is used to make single-use, disposable packaging items or products which will get permanently thrown out within one year.[3] Often, consumers of the various types of plastics mainly use them for one purpose and then discard or recycle them. Per the United States Environmental Protection Agency, in 2011 plastics constituted over 12% of municipal solid waste.[4] In the 1960s, plastics constituted less than 1% of municipal solid waste.[4] Effects on the environment[edit] Land[edit] Landfill areas are constantly piled high with many different types of plastics. Ocean[edit] Effects on animals[edit] Effects on humans[edit] See also[edit]

PLASTIC & POLLUTION - PangeaSeed Plastic is as common to see at the beach as seashells are, but plastic litter is more than just an aesthetic disturbance; it’s a sign that humans are treating the oceans like a garbage bin.Today, the oceans and marine life are facing the threat of permanent alteration from a number of sources of pollution, and plastic is among the most significant. Plastic accounts for 60-80% of marine garbage, and in high-density areas, reaches up to 95% (Weisman, 2007). In the middle of the North Pacific, plastic outweighs algae, six to one (Leahy, 2004). The average American will throw away 185 pounds of plastic each year. When a plastic bottle is discarded improperly, rains and waterways may sweep it into a gutter and eventually out to sea. In due course, the plastic breaks down into microplastic particles, which are fragments of plastic smaller than a grain of sand or the tip of a needle. Sound pollution is an invisible but noteworthy form of pollution in the oceans. Photo copyright PangeaSeed.

Protecting Water from Non-Point Source Pollution Ocean Plastic Ocean Plastic Hundreds of thousands of sea turtles, whales, and other marine mammals, and more than 1 million seabirds die each year from ocean pollution and ingestion or entanglement in marine debris. Marine debris is manmade waste that is directly or indirectly disposed of in oceans, rivers, and other waterways. Most trash reaches the seas via rivers, and 80% originates from landfills and other urban sources. There are 5 major ocean gyres worldwide. Researchers have also estimated that for every 2.2 pounds (1 kilogram) of plankton in this area, there is 13.2 pounds (6 kilograms) of plastic. Did You Know? Plastic bags are petroleum-based and do not biodegrade. What is SEE Turtles? We're a non-profit that promotes conservation travel through wildlife tours that help protect endangered species. Contact us for more information about ocean plastic. Links & Resources The Great Pacific Garbage Patch Video Pacific Garbage Patch Article & Photos-Sept 09 Trash-eating Turtles Dying in Record Numbers

International Bird Rescue -  Our Work -  Research and Education -  How Plastics Affect Birds Bits of plastic debris litter the shore: bottle caps, toys, cigarette lighters, fishing line and other garbage. Scientists are now documenting how this surge of plastic trash leaves a wake of death and disease that directly affects seabirds. In many areas of the globe, birds inadvertently feed on plastic floating on the water, mistaking it for food, and many times this ingestion leads to death and even the death of their young. Large plastic detritus such as bottles and packaging has well-known effects on sea life, strangling birds and fish and transporting alien species to new waters. Because plastic pellets are magnets for toxic chemicals like DDT and PCBs, they effectively become poison pills. Especially lethal is discarded fishing gear. What we know: Plastic water bottles take 450 years to decompose; Fishing lines and nets can take up to 600 years to decompose; and Plastic bags or balloons in the ocean are dangerous (they can look like a jellyfish meal to a sea turtle). Also see:

Plastic in Bird’s Stomachs Reveals Ocean’s Garbage Problem Plastic found in the stomachs of dead seabirds suggests the Pacific Ocean off the northwest coast of North America is more polluted than was realized. The birds, called northern fulmars, feed exclusively at sea. Plastic remains in their stomachs for long periods. Researchers have for several decades examined stomach contents of fulmars, and in new study they tallied the plastic products in dead fulmars that had washed up on the coasts of Washington, Oregon and British Columbia, Canada. The research revealed a "substantial increase in plastic pollution over the past four decades," the researchers said in a statement. "Like the canary in the coal mine, northern fulmars are sentinels of plastic pollution in our oceans," said Stephanie Avery-Gomm, the study's lead author and a graduate student in University of British Columbia's Department of Zoology. Plastic products deteriorate slowly and several studies in recent years have shown vast amounts plastic and other trash in the Pacific Ocean.

Plastics in Our Oceans All photos (except where noted) courtesy of Paul Joyce, Sea Education Association by Kimberly Amaral Strolling through the average supermarket, shoppers find literally hundreds (if not thousands) of items to make their lives easier. To humans, these are items of comfort, if not necessity. Photo by K. Plastic--whether it be for a container, a wrapper, or the product itself--has become an everyday part of our lives. But when plastic reaches our waters, whether it be plastic bags or drifting fish nets, it poses a threat to the animals that depend on the oceans for food. Before the days of plastic, when fishermen dumped their trash overboard or lost a net, it consisted of natural materials--metal, cloth or paper that would either sink to the bottom or biodegrade quickly. It can get there from here But how would a syringe that a diabetic uses make it into the ocean? In a more direct route, boaters may dump their trash right into the sea. It's a great big world out there What you can do R.

Plastic Statistics | Ocean Crusaders Plastic Ain’t so Fantastic Shoppers worldwide are using approximately 500 billion single-use plastic bags per year. This translates to about a million bags every minute across the globe, or 150 bags a year for every person on earth. And the number is rising. If you joined them end on end they would circumnavigate the globe 4,200 times.100,000 marine creatures a year die from plastic entanglement and these are the ones found.Approximately 1 million sea birds also die from plastic.A plastic bag can kill numerous animals because they take so long to disintegrate. In Australia Australia alone uses 6.9 billion plastic bags a year of which 3.6 billion are plastic shopping bags.If you tied 6.9 billion plastic bags together end on end they would travel around the world 42.5 times.Australians dump 36,700 tonnes of plastic bags into our landfill every year. Bottled Water Story More than a billion people around the world do not have access to safe drinking water. Prevention is better than a cure.

Great Pacific garbage patch The area of increased plastic particles is located within the North Pacific Gyre, one of the five major oceanic gyres. The Great Pacific garbage patch, also described as the Pacific trash vortex, is a gyre of marine debris particles in the central North Pacific Ocean located roughly between 135°W to 155°W and 35°N and 42°N.[1] The patch extends over an indeterminate area, with estimates ranging very widely depending on the degree of plastic concentration used to define the affected area. The patch is characterized by exceptionally high concentrations of pelagic plastics, chemical sludge and other debris that have been trapped by the currents of the North Pacific Gyre.[2] Despite its size and density, the patch is not visible from satellite photography, nor even necessarily to a casual boater or diver in the area, since it consists primarily of a small increase in suspended, often-microscopic particles in the upper water column. Discovery[edit] Charles J. Formation[edit] In 2012, Miriam C.