Steve Jobs Portrait in Apples of the Day 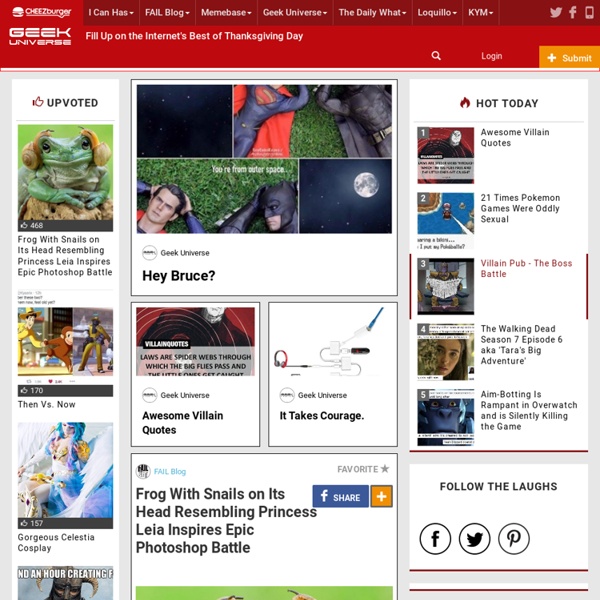 Rage Comics Most Upvoted 243 votes This 78-Year-Old Granny Has the Reaction to Roller Coasters We Can All Relate to Brain Pickings - Part 2 By: Maria Popova “We find what we are looking for. If we are looking for life and love and openness and growth, we are likely to find them. If we are looking for witchcraft and evil, we’ll likely find them, and we may get taken over by them.” The Harry Potter Lexicon click above for detailed menus, click below for special sections Affiliate Sites: These web sites have received special permission to use material from the Lexicon to create similar sites for non-English-speaking fans. L'Encyclopédie Harry Potter (in French)El Diccionario de los Magos (en Español)

How to Make a Personal Fire Pit For Cheap! My name is Karen and I haven’t lit anything on fire in 5 months. I’m sure I deserve some sort of a chip or something for that. You see … I’m a bit of a pyromaniac. VirtualBox Here you will find links to VirtualBox binaries and its source code. VirtualBox binaries ¶ By downloading, you agree to the terms and conditions of the respective license. If you're looking for the latest VirtualBox 6.0 packages, see VirtualBox 6.0 builds.

Nerd Art Stock Pile: Superhero Sculptures, TMNT Noses, Star Wars Pumpkins, Portal and M.C. Escher Mashup, Bebop Taxidermy and MOAR The Interwebz is a great place for nerdy art and the like. A lot of the time it’s fuckin’ weird shit like Superman rupturing Lois Lanes vagina with his super sperm, Gandalf docking Magneto, bestiality with the Ninja Turtles and shit like that. But there are a lot of awesome things that we see on a daily basis, and we’re lazy nerd bastards so we just round them all up once a week for your nerdgasm glory. First up, we have a set of bizarre Superhero sculptures by artist Calvin Ma.

Bananas and Monkeys Original source unknown. (But the story appears to have some basis in fact.) Start with a cage containing five monkeys. Inside the cage, hang a banana on a string and place a set of stairs under it. Before long, a monkey will go to the stairs and start to climb towards the banana. Aston Martin glass phone concept oozes class, just like the cars Aston Martin makes some of the most drool-worthy cars on the planet, so any phone that's going to carry the Aston Martin logo had better look pretty sleek. This transparent phone concept from Mobiado should do the trick, with a wow factor that will get tongues wagging even if you aren't standing next to the car itself. Far from being just a cool phone with a fancy logo slapped onto it, the CPT002 can control many of the car's functions. Just having it in your pocket operates the keyless entry system, and once you're moving the phone can do things like automatically upload pictures from onboard cameras in the car to your social networks, so your friends can see where you're traveling, It will even use its accelerometer to measure your movement in an accident, then adjust the airbag deployment speed and seat belt tensioner to fit the situation. While it is a concept, this isn't just some pie-in-the-sky phone that will never exist in the real world.

Artists pay tribute to Steve Jobs - Appletell A newly-formed French rock band known as Bravery in Battle and artist Olivier Lefebvre from Mont-Saint-Hilaire, Quebec City have paid tribute to Steve Jobs in their own very special ways. Lefebvre’s work can be seen above, as he created that portrait of Steve Jobs entirely out of 3,735 deer (rotting) apples. Although the portrait may not look exactly like Steve, the resemblance is certainly there.