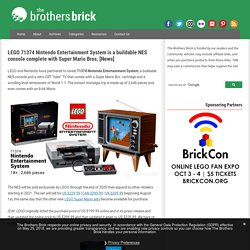 The instant nostalgia trip is made up of 2,646 pieces and even comes with an 8-bit Mario. These Gauls are crazy! LEGO Star Wars 75317 The Mandalorian & the Child (Baby Yoda) BrickHeadz characters [Review] The appearance of “The Child” (immediately nicknamed Baby Yoda) at the end of the first episode of “The Mandalorian” on Disney+ last November caught the whole world by surprise, including merchandise and toy licensees like LEGO, who had to scramble to produce products based on the show. 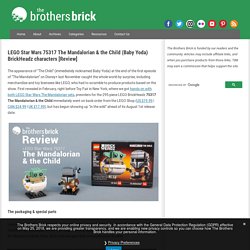 First revealed in February, right before Toy Fair in New York, where we got hands on with both LEGO Star Wars The Mandalorian sets, preorders for the 295-piece LEGO BrickHeadz 75317 The Mandalorian & the Child immediately went on back-order from the LEGO Shop (US $19.99 | CAN $24.99 | UK £17.99), but has begun showing up “in the wild” ahead of its August 1st release date. The packaging & special parts Like previous LEGO BrickHeadz sets that have included multiple characters, the parts for each character are packaged in their own bags — in this case, two sets of bags to separate the parts for Mando and Baby Yoda.

Each one also gets their own instruction booklet. Airship! Airship! Airship! Yes, she knows it's a multipass. Anyway, we're in love. When you’re having a bad day, sometimes it’s nice to just sit down and watch a fun science fiction movie like The Fifth Element. 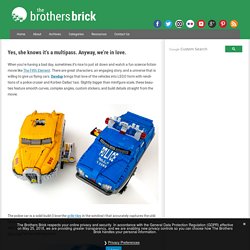 There are great characters, an engaging story, and a universe that is willing to give us flying cars. Davdup brings that love of the vehicles into LEGO form with renditions of a police cruiser and Korben Dallas’ taxi. Slightly bigger than minifgure scale, these beauties feature smooth curves, complex angles, custom stickers, and build details straight from the movie. LEGO's breakdancing robot could replace pens and paper in schools. LEGO education has introduced a new coding and robotics set called ‘spike prime’, designed to introduce middle schoolers to robotics, engineering, and coding. targeted towards children in grades 6-8, the idea is to get students hands-on with lessons, developing their confidence as well as their coding abilities – an issue LEGO education has identified as driving kids away from STEM subjects. images courtesy of LEGO the spike prime kit brings together LEGO bricks, a programmable, multi-port hub, sensors and motors, that students can get to know and understand before using to them to build various creations. instead of pointing students toward complex projects, the point is to focus on basic knowledge and practicality. the spike prime kit retails at $330 and includes 523 technic pieces which can be used to build many different creations. 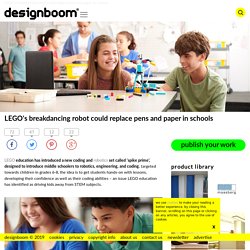 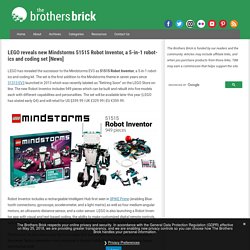 The set is the first addition to the Mindstorms theme in seven years since 31313 EV3 launched in 2013 which was recently labeled as “Retiring Soon” on the LEGO Store online. The new Robot Inventor includes 949 pieces which can be built and rebuilt into five models each with different capabilities and personalities. The set will be available later this year (LEGO has stated early Q4) and will retail for US $359.99 | UK £329.99 | EU €359.99. Robot Inventor includes a rechargeable Intelligent Hub first seen in SPIKE Prime (enabling Bluetooth connections, gyroscope, accelerometer, and a light matrix) as well as four medium-angular motors, an ultrasonic distance sensor, and a color sensor. 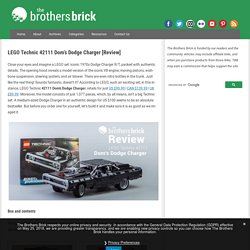 The opening hood reveals a model version of the iconic V8 engine; moving pistons, wishbone suspension, steering system, and air blower. There are even nitro bottles in the trunk. The ultimate ride with a tiny horsepower. Tiny tank has a leg up on the competition. Come quietly or there will be...trouble. So tell me, Clarice, have the lambs stopped screaming? LEGO goes Fast & Furious with Technic 42111 Dom's Dodge Charger [News] LEGO has revealed the Technic 42111 Dom’s Dodge Charger, a 1,077-piece set depicting the iconic car driven by Dominic Toretto (Vin Diesel) in the Fast & Furious film franchise. 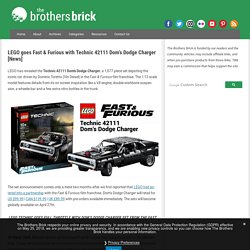 The 1:13 scale model features details from its on-screen inspiration like a V8 engine, double-wishbone suspension, a wheelie bar and a few extra nitro bottles in the trunk. The set announcement comes only a mere two months after we first reported that LEGO had entered into a partnership with the Fast & Furious film franchise. Dom’s Dodge Charger will retail for US $99.99 | CAN $139.99 | UK £89.99 with pre-orders available immediately. The sets will become globally available on April 27th. 30 March 2020, Billund: Muscle car lovers and Fast & Furious fans are getting set for the ultimate thrill. The rules of the race.

In the non-LEGO “real” world, I work in innovation, developing ideas for new products, mostly in the world of drinks. 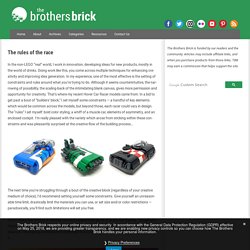 Doing work like this, you come across multiple techniques for enhancing creativity and improving idea generation. In my experience, one of the most effective is the setting of constraints and rules around what you’re trying to do. Although it seems counterintuitive, the narrowing of possibility, the scaling-back of the intimidating blank canvas, gives more permission and opportunity for creativity.

That’s where my recent Hover Car Racer models came from. In a bid to get past a bout of “builders’ block,” I set myself some constraints — a handful of key elements which would be common across the models, but beyond those, each racer could vary in design. LEGO T-47 Snowspeeder swooshes into action. LEGO® Sawtooth. By Marius Herrmann. 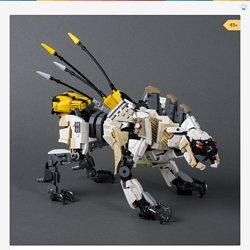 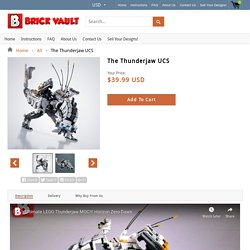 The Thunderjaw the most brutal opponent to be faced in the game Horizon Zero Dawn. It's body is made of metal, but at it's core The Thunderjaw is still a beast on the inside. BrickVault.Toys – Brick Vault. LEGO MOC-31037 The Watcher (Horizon Zero Dawn) (Other 2019) Jonas Kramm. Discover. Discover. - Global Cart. LEGO unveils two new Star Wars: The Mandalorian sets including the Razor Crest and an adorable Baby Yoda minifigure [News] LEGO has officially unveiled two new sets based on Star Wars: The Mandalorian ahead of the New York Toy Fair this weekend. The biggest set is 75292 The Razor Crest which comes with 1,023 pieces and minifigures including The Mandalorian, IG-11, Greef Karga, a Scout Trooper, and a new Baby Yoda minifigure.

The fifth horseman of the Apocalypse? Your doom approaches (slowly) Meet the happy couple - LEGO BrickHeadz 40383 & 40384 - Bride and Groom [Review] The LEGO BrickHeadz line introduced a wonderful way to build yourself, your siblings, or your friends, with the 41596 BrickHeadz Go Brick Me set. Now there’s another opportunity for depicting yourself or your chums in the brick — this time in celebration of a wedding. 40383 Bride and 40384 Groom allow you to build a happy couple to mark any upcoming nuptials. LEGO Speed Champions 76896 Nissan GT-R NISMO for 2020 [Review]

The LEGO Speed Champions theme has been rather quiet for most of 2019, following the release of fantastic sets like 75894 1967 Mini Cooper S Rally and 2018 MINI John Cooper Works Buggy in January, building on more vintage history in 2018 with sets like 75884 1968 Ford Mustang and 75889 Ferrari Ultimate Garage. In the intervening year, it’s now apparent that the LEGO Speed Champions design team has been hard at work redesigning the Speed Champions line from the ground up, shifting from models that are generally six studs wide to an eight-stud axle track, with cars from Jaguar, Lamborghini, Ferrari and Audi.

The new 76896 Nissan GT-R NISMO is the very first Japanese car featured in the Speed Champions theme, and was revealed to much fanfare at an event in November. The set includes 298 pieces with a driver minifig and will be released on January 1st, 2020 for US $19.99 | CAN $24.99 | UK £17.99. This banana bike is quite apeeling. As an alternative, you could build this 'Stang. When the official LEGO 10265 Ford Mustang set was released a while back, it received high praise as being one of the best LEGO cars ever produced. The strong lines of the classic muscle car translated well into brick form.

But what about the more modern Mustangs, which, though they do hearken back to some of the angular aesthetics of the muscle car heyday, are more curvy and seductive? Well, builder Firas Abu-Jaber took it upon himself to create an updated version of the set, and the resultant Ford Mustang Shelby GT500 looks amazing! Guns? Check. Rotors? Check. All systems go! Like this article? Tell all your friends! LEGO Speed Champions Ferrari F8 Tributo and 1985 Audi Sport Quattro S1 revealed [News] Prehistoric palaeontology pieced perfectly with plastic. Black is the new black: LEGO 1989 Batmobile 76139 [Review] This year, the world celebrates the anniversary of the Dark Knight; the story of Batman is 80 years old.

For many, many fans of the legend of Gotham it’s time to thumb through the oldest comics issues, while others will enjoy night marathons of movies featuring George Clooney, Christian Bale, and, of course, Michael Keaton. For the LEGO Group, it’s time to refill their supplies of bricks in black as not many things go together better than LEGO and Batman. This Black Friday comes the latest LEGO DC exclusive set, LEGO 76139 1989 Batmobile. A 3,306-piece monstrosity is an ultimate copy of the iconic vehicle from Tim Burton’s Batman movie. The set will be available on November 29 for Black Friday and will sell for US $249.99 | CAN $299.99 | UK £219.99. More images revealed for LEGO Speed Champions 76899 Lamborghini Huracán Super Trofeo EVO & Urus ST-X [News] LEGO reveals giant wooden minifigure as part of new collectible Originals product line [News]

First to the flames. This Mustang is ready to run with the horses. Not much screams “American” like a big-engined, gas-guzzling, machismo-granting muscle car. LEGO Ideas 21320 Dinosaur Fossils - assembling T. rex & Triceratops & Pteranodon, oh my! [Review] When you gotta catch 'em all, you need a Pokedex. Muscle cars look best in Bright N’ Obnoxious colors. I have a guilty pleasure: I like watching TV shows such as Fast N’ Loud or Bitchin’ Rides, in which cars that are typically American and rusty are transformed into mean street machines (usually along with plenty of scripted drama).

LEGO Building Brick Pillows. A little wasteland Peterbuilt. Yes, she knows it's a multipass. Anyway, we're in love. Cruisin' with the classics. Andy Warhol’s BMW M1 Art Car. A little dirt never hurt: LEGO Technic 42099 4x4 X-treme Off-Roader [Review] Half bulldozer, half tank, half robot, and 100% awesome. Objects in picture are larger than they appear. Life, uh, finds a way...to eat you. We came, we saw, we kicked its bricks! When there’s something strange in the LEGOhood, who you gonna call? Darren Thew, that’s who! This Le Mans racer is alternately awesome. Build your own LEGO transforming microscope [Instructions] I'm a leaf on the wind. Watch how I soar.

Where does he get those wonderful toys? The LEGO Store, obviously. Ridin' high on the Hog. The Tim Burton Batmobile, building digitally and making it a reality. The Gigahorse is a thing of automotive nightmares. LEGO 4×4 X-Treme Off-Roader. In space, no one can hear you scream, unless you are in a TIE fighter. [No Spoilers] I built a series of Moving GoT Castles with LEGO inspired by the show intro : gameofthrones. Stunning designs of the vehicles from Jurassic Park that you can now build in LEGO [Instructions] Win the 24 Hours of Le Mans with this 1968 Ford GT40 Mk1 in gorgeous Gulf livery. Leave your troubles behind with this UCS-scale version of Han Solo's Mobquet M-68 Landspeeder.