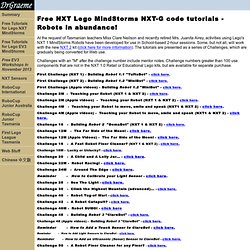 Juanita Airey, activities using Lego's NXT 1 MindStorms Robots have been developed for use in School-based 2-hour sessions. Some, but not all, will work with the new NXT 2 kit (click here for more information). The tutorials are presented as a series of Challenges, which are gradually being converted for Web use. Challenges with an "M" after the challenge number include mentor notes. Challenge numbers greater than 100 use components that are not in the NXT 1.0 Retail or Educational Lego kits, but are available for separate purchase. First Challenge (NXT 1) - Building Robot 1.1 "TuftsBot" - click here. First Challenge (NXT 2) - Building Robot 1.2 "MiniBot" - click here. Hacking the LEGO NXT. If you are a millionaire and able to buy a LEGO Mindstorms NXT, you may find kind of difficult to hack it or create homemade sensors. 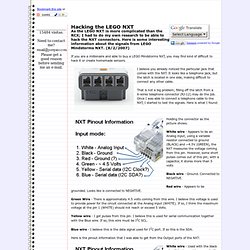 I believe you already noticed the particular jack that comes with the NXT. It looks like a telephone jack, but the latch is located in one side, making difficult to connect any other cable. That is not a big problem; filling off the latch from a 6-wires telephone connector (RJ-12) may do the job. Once I was able to connect a telephone cable to the NXT, I started to test the signals. Here is what I found: NXT Tutorial. This tutorial for LEGO Mindstorms NXT is divided in two sections. 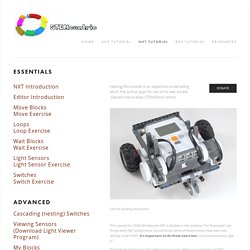 The “Essentials” are things every NXT programmer should know. Some of these movies have exercises directly under them. It’s important to do these exercises, not just assume you “get it.” The “Advanced” section is for reference purposes. LEGO Gear Ratio Calculator. Lego Mindstorms NXT Robots. NXT Programs - Fun Projects for your LEGO Mindstorms NXT. LEGO EV3 & NXT hacks and robots. LEGO. Design Ideas. Editing MyBlock in EV3. Projects for NXT 2.0. Quick Start Tutorial: LEGO Mindstorms NXT. Theo Jansen NXT. Lego Mindstorms Quadruped with Actuated Spine. A Better Line Follower - MIND-STORMS.COM. The line follower suggested in the official 'Robot Educator' exercises (called 'Switch', in the 'Beyond Basics' section) works very badly (because it's designed for simplicity rather than efficiency). 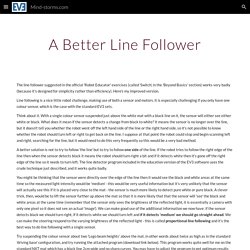 Here's my improved version. Line following is a nice little robot challenge, making use of both a sensor and motors. it is especially challenging if you only have one colour sensor, which is the case with the standard EV3 sets. Think about it. With a single colour sensor suspended just above the white mat with a black line on it, the sensor will either see either white or black. What does it mean if the sensor detects a change from black to white? A better solution is not to try to follow 'the line' but to try to follow one side of the line. Try suspending the colour sensor about two 'Lego beam heights' above the mat, in other words about twice as high as in the standard 'driving base' configuration, and try running the attached program (download link below).

EV3 Tutorial. This tutorial for LEGO Mindstorms EV3 is divided in two sections. 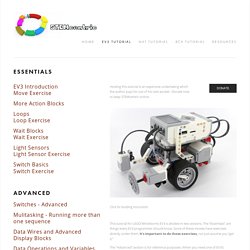 The “Essentials” are things every EV3 programmer should know. Some of these movies have exercises directly under them. It’s important to do these exercises, not just assume you “get it.” The “Advanced” section is for reference purposes. When you need one of EV3’s advanced functions, check it out. These lessons assume you have a basic robot with two drive motors, a touch sensor and a light sensor. If you need to run this tutorial at a location with poor internet service, you can download a special copy here. This tutorial was designed, and maintained by Dale Yocum, Engineering Program Director at Catlin Gabel School.

High Precision Long Range Infrared distance sensor for NXT or EV3 - www.mindsensors.com. Making a Proportional Line Follower for FLL (FIRST LEGO League) Robots. LEGO Mindstorms EV3 Programmable Brick. Overview The Display shows you what is going on inside the EV3 Brick and enables you to use the Brick Interface. 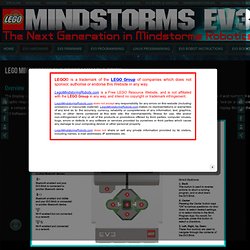 It also allows you to add text and numerical or graphic responses into your programming or experiments. For example, you might want to program the Display to show a happy face (or a sad face) for a comparison response or to display a number that is the result of a mathematical calculation (learn more about using the Display Block in the EV3 Software Help). The Brick Buttons allow you to navigate inside the EV3 Brick Interface. They can also be used as programmable activators. 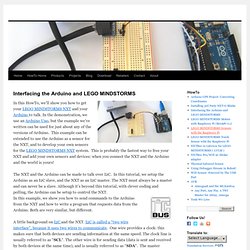 In the demonstration, we use an Arduino Uno, but the example we’ve written can be used for just about any of the versions of Arduino. Line Follower using EV3. Ahhh the classic challenge of following a black line! 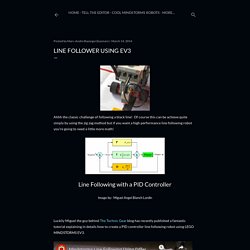 Of course this can be achieve quite simply by using the zig zag method but if you want a high performance line following robot you're going to need a little more math! Luckily Miguel the guy behind The Technic Gear blog has recently published a fantastic tutorial explaining in details how to create a PID controller line following robot using LEGO MINDSTORMS EV3.

I invite you to follow his tutorial found here With the help of his pseudo code you can write your own line following program or try his program thanks to the supplied EV3 source code. Remember to give credit to his work if you use part or all of his code in a program for one of your competition or school work. Fuzzy Line Following NXT Robot. Stefan Bracher One of the tutorials within the Lego Mindstorms NXT Software shows how to program a robot that follows a line using Boolean Logic. 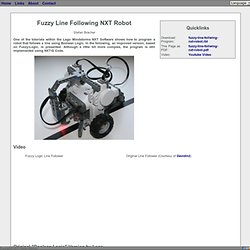