Are You Emotionally Agile? Find Out Now [Infographic] In Just 8 Words, Uber's New CEO Gave a Master Class in Leadership. He's barely started his new gig and he's already proving his approach is the antithesis of Kalanick's. 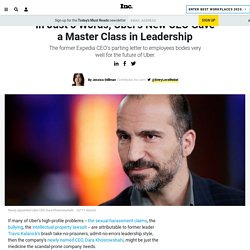 In fact, he took only eight words to do it. The polar opposite of frat boy bluster. Like any good leader, Khosrowshahi, the long-time CEO of Expedia (and a refugee from Iran) took the time to formally bid farewell to his employees and thank them for their hard work before leaving. So far that sounds like good but hardly astounding leadership. How to Make Games and Influence People: Leading Your Team Effectively and Healthily. How Emotional Energy Drives Employees to Excel. Articles published in strategy+business do not necessarily represent the views of the member firms of the PwC network. 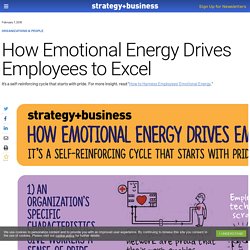 Council Post: Leading with Emotional Intelligence, Agility And Emotional Bonding. One of the most critical decisions you can make is to take on the role as leader. 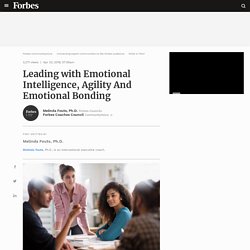 The 10 Commandments of Emotional Intelligence. Emotional intelligence is the ability to identify emotions (in both yourself and others), to recognize the powerful effects of those emotions, and to use that information to inform and guide behavior. 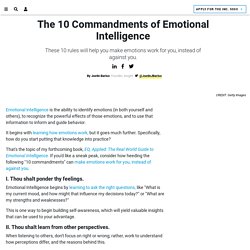 It begins with learning how emotions work, but it goes much further. Specifically, how do you start putting that knowledge into practice? I. Thou shalt ponder thy feelings. 7 Brilliant Things Emotionally Intelligent People Do When Their Buttons Are Pushed. I've witnessed drama especially with teams under pressure to meet tight deadlines, or when high-level managers or executives with strong personalities pull in different and opposing directions to further their own agendas. Whatever the case, laying low and avoiding the line of fire is an option. 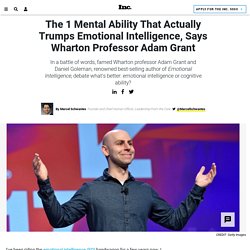 I love learning about it and stretching myself to regulate my emotions, and I especially love applying these skills to the way I work and live. According to Emotional Intelligence 2.0 by Travis Bradberry, "EQ is so critical to success that it accounts for 58 percent of performance in all types of jobs. " But ask any researcher or EQ expert, and they'll tell you the study of EQ has not had a smooth history. It has been debated since the mid-1990s over its effectiveness as an evidence-based leadership model, or as a predictor of job success. McCain's Senate Obamacare Speech Is a Master Class in Emotional Intelligence. If you're a leader, and especially if you've ever struggled with how to give a colleague or employee negative feedback about something they've done, it's worth 15 minutes of your time to watch Arizona Senator John McCain's speech to the Senate yesterday about Obamacare--and their performance in general. 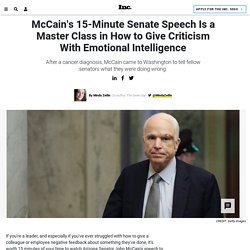 As you may know, McCain, who just had cranial surgery and received a brain cancer diagnosis, rose from his sickbed to fly to Washington so he could cast his vote in the Senate--a vote that Republicans, with a majority of only two senators, desperately need. Thanks to McCain's vote, Majority Leader Mitch McConnell was able to open debate on an Obamacare repeal, otherwise he would not have had the votes to even bring the matter up for discussion. This Email From Elon Musk to Tesla Employees Is a Master Class in Emotional Intelligence.

Musk insists, however, that safety is the number one priority at Tesla. He claims that recent actions, like the company's hiring thousands of employees to create a third shift and reduce excess overtime, have made a major impact in lowering the injury rate. No words can express how much I care about your safety and wellbeing. Facebook management moves around but people don’t leave. Kobe Bryant's Instagram Message to Gordon Hayward Teaches a Powerful Lesson in Emotional Intelligence. Science Says These Are the 12 Most Satisfying Jobs. They All Share 1 Key Characteristic. 'Love Bombing': What It Is, Why It's Dangerous, and How to Protect Yourself. Why Disney Fired the Man Behind Kermit the Frog (and a Major Lesson in Emotional Intelligence) 10 Qualities of People with High Emotional Intelligence.

Video: The Explainer: Emotional Intelligence - Harvard Business Review. What metta is. The One Thing Every Great Leader Cares About Most. Today I was reminded in a potent and somewhat painful way that leaders have a truly awesome responsibility. 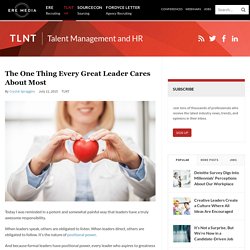 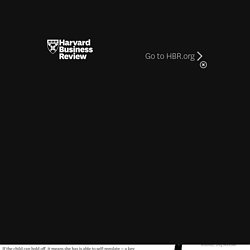 You put a child in a room, set one marshmallow in front of her and explain that, if she’s able to wait 10 minutes before eating it, she’ll get an extra marshmallow to enjoy. Then you leave her alone. If the child can hold off, it means she has is able to self-regulate — a key component of emotional intelligence. And, as psychologist Walter Mischel has famously shown, this translates into long-term benefits. 18 Behaviors of Emotionally Intelligent People. 7-ways-to-unlock-the-emotional-intelligent-leader-within. 13 Habits Of Humble People. Inspiring Leadership through Emotional Intelligence. To Create a Real Connection, Show Vulnerability - Michael Simmons. By Michael Simmons | 11:00 AM May 9, 2014 The hardest part of my business failing was not the loss of the business. 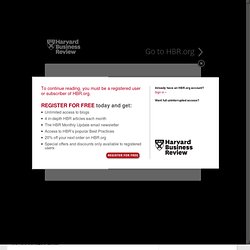 It was the loss of the identity that came with being a successful entrepreneur. I had become so attached to this identity that when others asked how the non-existent business was doing, I said, “Great!” The chasm between the image of being financially set for life and owning a failed business was painful. I felt like a fraud. When I finally got up the courage to start telling the truth, I could feel a weight lift off my shoulders. In his highly cited research, University of Georgia social psychology professor Abraham Tesser found that when someone close to us outperforms us in a task relevant to us, it often threatens our self-esteem.

My personal experience matches the research. In talking with Dr. 5 Ways To Measure The Emotional Intelligence Of Your Boss. Research has shown us that more than 90% of top leadership performers have a high amount of emotional intelligence or EI. 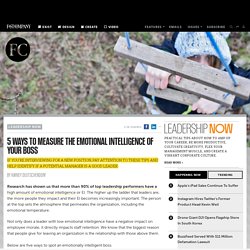 The higher up the ladder that leaders are, the more people they impact and their EI becomes increasingly important. The person at the top sets the atmosphere that permeates the organization, including the emotional temperature. Not only does a leader with low emotional intelligence have a negative impact on employee morale, it directly impacts staff retention. We know that the biggest reason that people give for leaving an organization is the relationship with those above them. Below are five ways to spot an emotionally intelligent boss. Can You Really Improve Your Emotional Intelligence? - Tomas Chamorro-Premuzic. Who wouldn’t want a higher level of emotional intelligence? Studies have shown that a high emotional quotient (or EQ) boosts career success, entrepreneurial potential, leadership talent, health, relationship satisfaction, humor, and happiness. It is also the best antidote to work stress and it matters in every job — because all jobs involve dealing with people, and people with higher EQ are more rewarding to deal with.

Most coaching interventions try to enhance some aspect of EQ, usually under the name of social, interpersonal, or soft skills training. The underlying reasoning is that, whereas IQ is very hard to change, EQ can increase with deliberate practice and training. But what is the evidence? Nearly 3,000 scientific articles have been published on EQ since the concept was first introduced in 1990, and there are five key points to consider: How Emotionally Intelligent Are You? Here's How To Tell. What makes some people more successful in work and life than others? IQ and work ethic are important, but they don't tell the whole story. Our emotional intelligence -- the way we manage emotions, both our own and those of others -- can play a critical role in determining our happiness and success.

Plato said that all learning has some emotional basis, and he may be right. Emotional Intelligence Predicts Job Success: Do You Have It?