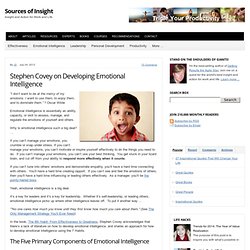 I want to use them, to enjoy them, and to dominate them.” ? Oscar Wilde Emotional Intelligence is essentially an ability, capacity, or skill to assess, manage, and regulate the emotions of yourself and others. Why is emotional intelligence such a big deal? … If you can’t manage your emotions, you crumble or snap under stress. If you can’t tune into others’ emotions and demonstrate empathy, you’ll have a hard time connecting with others. Emotional Intelligence: The Social Skills You Weren't Taught in School. Signs That You Lack Emotional Intelligence. Executive Summary Often, emotional intelligence is the key differentiator between a star performer and the rest of the pack, yet many never embrace the skill for themselves. 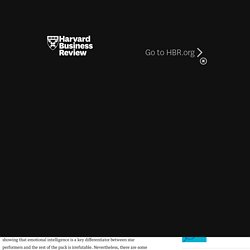 Stop Calling It Soft Skills! John Dillon is an entrepreneur who has been wildly successful as VP of sales for Oracle and CEO of start-ups that have been solid investments for staff and investors. 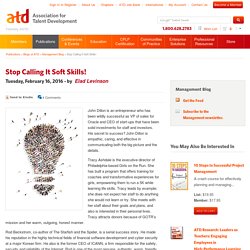 His secret to success? John Dillon is empathic, caring, and effective in communicating both the big picture and the details. Tracy Ashdale is the executive director of Philadelphia-based Girls on the Run. She has built a program that offers training for coaches and transformative experiences for girls, empowering them to run a 5K while learning life skills. Tracy leads by example; she does not expect her staff to do anything she would not learn or try. Rod Beckstrom, co-author of The Starfish and the Spider, is a serial success story. Kathie Powell is the CEO of Petaluma Health Center in Northern California.

All four of these managers, as well as countless other leaders, are experts and experimenters in human skills. Advertisement Being interested in the experience of others. The Dark Side of Emotional Intelligence. Some of the greatest moments in human history were fueled by emotional intelligence. 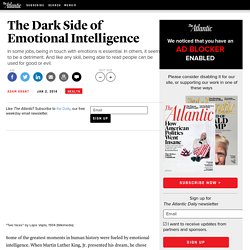 When Martin Luther King, Jr. presented his dream, he chose language that would stir the hearts of his audience. “Instead of honoring this sacred obligation” to liberty, King thundered, “America has given the Negro people a bad check.” He promised that a land “sweltering with the heat of oppression” could be “transformed into an oasis of freedom and justice,” and envisioned a future in which “on the red hills of Georgia sons of former slaves and the sons of former slave-owners will be able to sit down together at the table of brotherhood.”

Delivering this electrifying message required emotional intelligence—the ability to recognize, understand, and manage emotions. Dr. Recognizing the power of emotions, another one of the most influential leaders of the 20th century spent years studying the emotional effects of his body language. Mental Strength. 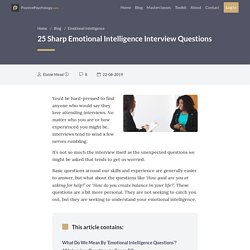 No matter who you are or how experienced you might be, interviews tend to send a few nerves rumbling. It’s not so much the interview itself as the unexpected questions we might be asked that tends to get us worried. Basic questions around our skills and experience are generally easier to answer, but what about the questions like ‘How good are you at asking for help?’ Or ‘How do you create balance in your life?’. These questions are a bit more personal. What Do We Mean By ‘Emotional Intelligence Questions’? You’ve no doubt heard the term ‘emotional intelligence’ thrown around a bit, especially over the last few years (and especially if you hang out on the Positive Psychology blog a lot!). 17 Emotional Intelligence Tests and Assessments. 3 Secrets That Will Make You Emotionally Intelligent. Before we commence with the festivities, I wanted to thank everyone for helping my first book become a Wall Street Journal bestseller. 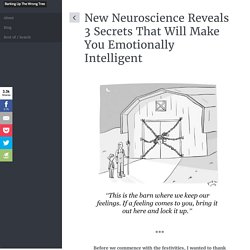 To check it out, click here. Emotional Intelligence. It’s everywhere. They won’t shut up about it. And yet nobody seems to be able to explain what it really means or how you develop it. Face it: you don’t even know what an emotion is. And it turns out the latest research shows that the little we know about emotions is actually all wrong. Lisa Feldman Barrett is a Professor of Psychology at Northeastern University, with appointments at Massachusetts General Hospital and Harvard Medical School. Buckle in. Time to fire up Occam’s chainsaw. How to Be Emotionally Intelligent. Photo What makes a great leader? 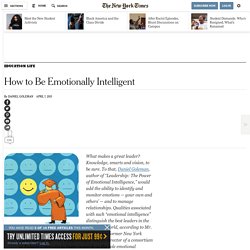 Knowledge, smarts and vision, to be sure. To that, , author of “Leadership: The Power of Emotional Intelligence,” would add the ability to identify and monitor emotions — your own and others’ — and to manage relationships. Qualities associated with such “emotional intelligence” distinguish the best leaders in the corporate world, according to Mr. Goleman, a former New York Times science reporter, a psychologist and co-director of a consortium at Rutgers University to foster research on the role emotional intelligence plays in excellence.