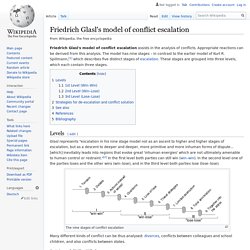 Appropriate reactions can be derived from this analysis. The model has nine stages – in contrast to the earlier model of Kurt R. Five Dysfunctions of a Team Patrick Lencioni Talk 2013.

One of the company's most interesting initiatives, Project Aristotle, gathered several of Google's best and brightest to help the organization codify the secrets to team effectiveness. Specifically, Google wanted to know why some teams excelled while others fell behind. Before this study, like many other organizations, Google execs believed that building the best teams meant compiling the best people. It makes sense. Managers Are Unnecessary, But Leaders Are Essential. Five ways you’re hurting your remote working relationships. 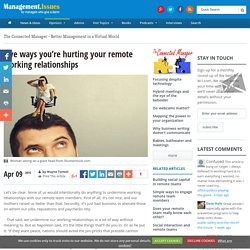 None of us would intentionally do anything to undermine working relationships with our remote team members. Jeff Gothelf, "Building Successful Teams with Evidence-Based Innovation and Design" Tom Wujec: Build a tower, build a team. On Creating a Powerful Organization. What scientists call distributed control is usually called empowerment by management consultants. 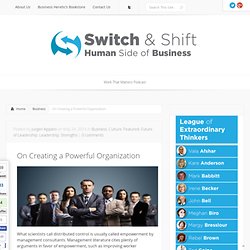 Management literature cites plenty of arguments in favor of empowerment, such as improving worker satisfaction, increasing profitability, and strengthening competitiveness. [Bowen and Lawler, “Empowering Service Employees”] All of these are true, but never forget that the real reason for empowerment is to improve system effectiveness and survival. We enable the organization to have more resilience and agility by delegating decision-making and distributing control. Empowerment Means: A More Powerful Organization Unfortunately, empowerment sounds easier than it is. Margaret Heffernan: Dare to disagree. Seek and Celebrate Small Victories. The most important thing in software development is motivation. 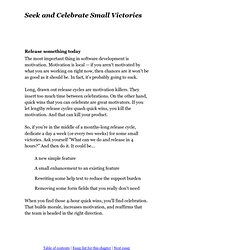 Motivation is local — if you aren't motivated by what you are working on right now, then chances are it won't be as good as it should be. In fact, it's probably going to suck. Long, drawn out release cycles are motivation killers. They insert too much time between celebrations. On the other hand, quick wins that you can celebrate are great motivators. Yves Morieux: As work gets more complex, 6 rules to simplify. Successful Moderation of Brainstorming Meetings. I think the game development community has done a pretty good job of sharing resources and ideas and tips and tricks on effective brainstorming. 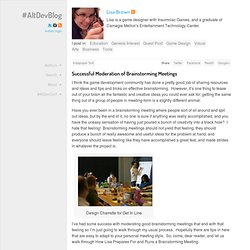 However, it’s one thing to tease out of your brain all the fantastic and creative ideas you could ever ask for; getting the same thing out of a group of people in meeting-form is a slightly different animal. Have you ever been in a brainstorming meeting where people sort of sit around and spit out ideas, but by the end of it, no one is sure if anything was really accomplished, and you have the uneasy sensation of having just poured a bunch of creativity into a black hole? Keeping your team on the same page, the Insomniac way. The larger your team is, the more opinions there are, and the more difficult it is to make sure that everyone is sharing a vision and heading in the same direction. 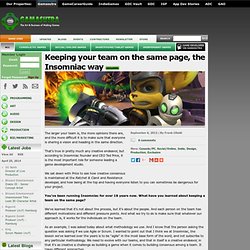 That's true in pretty much any creative endeavor, but according to Insomniac founder and CEO Ted Price, it is the most important role for someone leading a game development studio. We sat down with Price to see how creative consensus is maintained at the Ratchet & Clank and Resistance developer, and how being at the top and having everyone listen to you can sometimes be dangerous for your project. You've been running Insomniac for over 18 years now. What have you learned about keeping a team on the same page? Will Wright et la gestion d'une équipe : Anti Patterns. Produire un jeu, c’est d’abord et avant tout une aventure humaine. 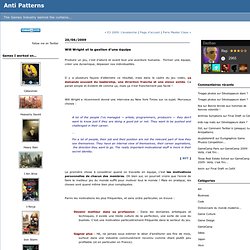 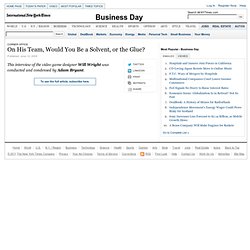