'Clock' predicts when Sun will 'wake up' and cause solar storms. New 'sun clock' predicts when Earth's star will wake from its slumber, helping experts prepare for extreme space weather events that knock out power grids and satellites The sun is currently sleeping, but experts say an awakening is imminent When it wakes, it will increase solar activity and create extreme space weather Scientists have now designed a sun clock to predict when this will occurThe team gathered sunspot observations over the past 200 years Then mapped solar activity over 18 solar cycles to a standardized 11-year cycle This allowed researchers to see the switch on and off times of the sun By Stacy Liberatore For Dailymail.com Published: 12:11 EDT, 15 June 2020 | Updated: 12:23 EDT, 15 June 2020 The sun is due for an awakening that would create extreme space weather that could have catastrophic effects– and experts may have a way to predict the event. 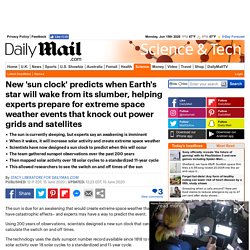 Using 200 years of observations, scientists designed a new sun clock that can better calculate the switch on and off times. Parker Solar Probe: Nasa delays mission to unlock Sun's mysteries. Media playback is unsupported on your device US space agency Nasa has delayed its a mission to send a satellite closer to the Sun than any before. 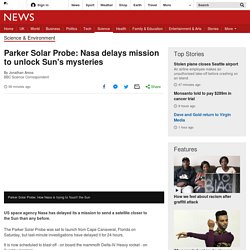 The Parker Solar Probe was set to launch from Cape Canaveral, Florida on Saturday, but last-minute investigations have delayed it for 24 hours. Incredible image shows solar activity at its quietest in 100 years. It is raining PLASMA on the sun: Most detailed images captured of solar flares reveal bright spots and coronal downpours. The scorching hot atmosphere around the sun is not the most likely place you would expect to find rain, but scientists have captured images of downpours of plasma in our stars corona. 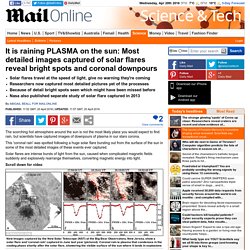 The sun's quiet activity could trigger a mini ice age, researchers warn. The sun is in the midst of its quietest period in more than a century. 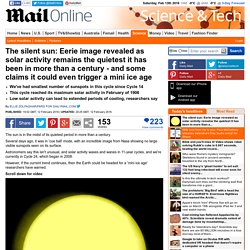 Several days ago, it was in 'cue ball' mode, with an incredible image from Nasa showing no large visible sunspots seen on its surface. Astronomers say this isn't unusual, and solar activity waxes and wanes in 11-year cycles, and we're currently in Cycle 24, which began in 2008. However, if the current trend continues, then the Earth could be headed for a 'mini ice age' researchers have warned. Scroll down for video. Spotting solar flares BEFORE they erupt and what causes explosions on the sun. Among the many problems and challenges facing future missions to Mars is the threat of solar flares and radiation causing havoc with spacecrafts, and endangering astronauts. 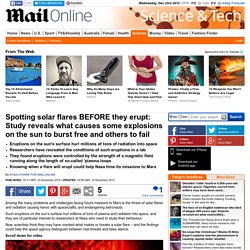 Such eruptions on the sun's surface hurl millions of tons of plasma and radiation into space, and they are of particular interest to researchers at Nasa who need to study their behaviour. Now, scientists think they may have cracked what makes or breaks a solar flare – and the findings could help the space agency distinguish between real threats and false alarms. Scroll down for video. Huge arching eruption on sun's surface captured by Nasa – video. The Fires Below - an aurora seen by the International Space Station. 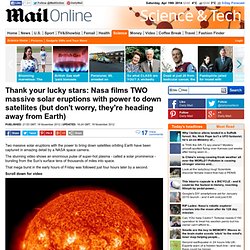 The stunning video shows an enormous pulse of super-hot plasma - called a solar prominence - bursting from the Sun's surface tens of thousands of miles into space. That mega burst in the early hours of Friday was followed just four hours later by a second. Scroll down for video. Fermi Detects Highest-Energy Light Ever. June 12, 2012 Lee Rannals for RedOrbit.com Lee Rannals for redOrbit.com NASA said that its Fermi Gamma-ray Space Telescope detected the highest-energy light ever associated with an eruption on the sun on March 7. 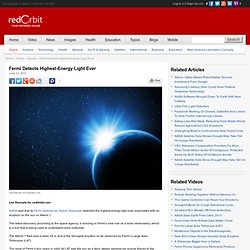 The latest discovery, according to the space agency, is echoing in Fermi’s new role as a solar observatory, which is a tool that is being used to understand solar outbursts. The March 7 flare was a class X5.4, and is the strongest eruption so far observed by Fermi’s Large Area Telescope (LAT). Sun storm threat to GPS: Space agency plans global network to study effects of 'solar max' on satellite communications. The Sun reaches the most active period of its 11-year cycle in summer 2013Increases in the number of sunspots will cause changes in the ionosphere that could interfere with radio transmissions from spaceGPS relies on transmissions timed to the split-second, and there are fears the interference could case serious problems with navigation By Damien Gayle Published: 13:04 GMT, 14 December 2012 | Updated: 17:14 GMT, 14 December 2012. 'Space storms' will cause 'widespread power cuts' and cripple phones, satellites and railway signals.

Satellite navigation technology has never experienced a 'solar max'Changes in the ionosphere could cause problems with GPS By Anna Edwards and Damien Gayle Published: 09:16 GMT, 6 February 2013 | Updated: 13:09 GMT, 6 February 2013 Britain is facing crippling power cuts sparked by space storms that could scramble signals used in mobile phones, railways and satellites. 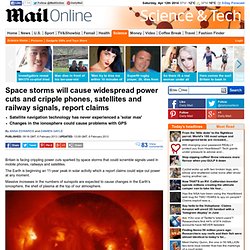 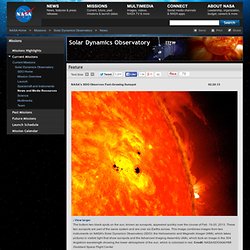 These two sunspots are part of the same system and are over six Earths across. This image combines images from two instruments on NASA's Solar Dynamics Observatory (SDO): the Helioseismic and Magnetic Imager (HMI), which takes pictures in visible light that show sunspots and the Advanced Imaging Assembly (AIA), which took an image in the 304 Angstrom wavelength showing the lower atmosphere of the sun, which is colorized in red. Credit: NASA/SDO/AIA/HMI/Goddard Space Flight Center As magnetic fields on the sun rearrange and realign, dark spots known as sunspots can appear on its surface. Nasa spacecraft watches two breathtaking eclipses of the Sun by the Earth and the Moon in less than seven hours.

David-tyler.com. It's the sun, as viewed from a back garden in High Wycombe: Amateur astronomer captures solar streaks in incredible detail. Amateur solar-photographer Dave Tyler, 71, used a 5-inch refracting telescope equipped with a hydrogen-alpha solar filterShows a 'filament' - a snapped magnetic field, appearing to give the sun a facial expression By Mark Prigg Published: 11:24 GMT, 22 March 2013 | Updated: 12:24 GMT, 25 March 2013. 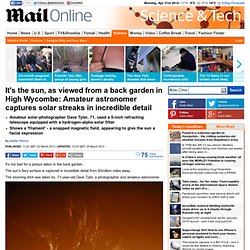 Faint 'Red Arcs' Spotted Over Europe. Glowing red arcs invisible to the naked eye have now been detected high above most of Europe using advanced cameras pointed at the sky. When streams of high-energy, charged particles come rushing from the sun to batter Earth, they cause what are called geomagnetic storms. These events are disruptions in the magnetosphere, the part of Earth's atmosphere dominated by the planet's magnetic field. The most dramatic effects of these storms are giant, bright auroras in Earth's polar regions, but the tempests result in other striking consequences as well, such as faintly glowing red arcs high up in the ionosphere.

This is the electrically charged part of Earth's atmosphere, stretching from about 50 to 370 miles (85 to 600 kilometers) above the Earth. The arcs give off a very specific wavelength of red light, but are too faint to see with the naked eye. Scientists had thought there was too much light pollution over Europe for the dim, red arcs to be visible. STUNNING images reveal the sun's most powerful solar flare of the year. Flare caused temporary radio blackout on EarthClassed as 'mid-level' flare by NasaFlares expected to increase as sun moves towards its solar maximum later this year By Mark Prigg Published: 13:59 GMT, 12 April 2013 | Updated: 17:47 GMT, 12 April 2013.

Three years of solar activity in three minutes - Nasa timelapse. The sun gets the X-Factor: Most powerful 'X-class' solar flares of 2013 erupt from surface. Flares are first to be classified as 'X Class', the most intense, of 2013Spewed particles out at a staggering 745 miles per second - the equivalent of 4.32 million miles per hour By Mark Prigg Published: 13:17 GMT, 14 May 2013 | Updated: 15:19 GMT, 14 May 2013 This is the jaw-dropping moment the sun experiences one of its largest solar storms of the year as particles are blasted out at 1,200 miles per second.

Solar flares, which are the greatest explosive events we experience, take place on the Sun when energy stored in twisted magnetic fields is suddenly released. The bursts of radiation aren't a threat to humans, although when powerful enough they can disturb the atmosphere in the layer where GPS and communications signals travel. Scroll down for video On May 13, 2013, an X2.8-class flare erupted from the sun -- the strongest flare of 2013 to date. The 'gigantic hole' in the SUN that's firing solar material into space and was spotted by a spacecraft.

The massive coronal hole - a dark, low density region of the sun’s outermost atmosphere - covered a quarter of the sunSpotted by the SOHO spacecraft, coronal holes contain little solar material, have lower temperatures and appear much darker than their surroundingsScientists are studying the holes to learn more about space weather, that could one day affect life on Earth By Sarah Griffiths Published: 15:26 GMT, 29 July 2013 | Updated: 23:08 GMT, 29 July 2013.

Sun's Magnetic Field to Reverse: What It Means. The sun's magnetic field, which spans the solar system, is just months away from flipping, observatory measurements show. "This change will have ripple effects throughout the solar system," solar physicist Todd Hoeksema of Stanford University said in a statement. 'Giant hole' in sun spotted by spacecraft. The sun as you've never seen it before: Stunning images reveal the tumultuous inner and outer workings of our star. Amazing images of solar flares are captured by an amateur photographer in his garden. Dave Tyler, from a village near High Wycombe in Buckinghamshire used a five inch refracting telescope with specialist filters to take the images72-year-old captured violent solar flares and spots on the sun’s surface, which is 5,505°C and 93million miles (150million km) away from EarthThe images show solar flares as the sun goes through its ‘solar maximum’ – a period when it is most active that occurs approximately every 11 years By Sarah Griffiths Published: 12:23 GMT, 18 March 2014 | Updated: 14:43 GMT, 18 March 2014 Most people are content with spotting birds and butterflies in their garden.

But a British amateur photographer has set his sights a lot higher and has taken incredible images of the sun’s raging surface from his back yard. The 72-year-old managed to capture violent solar flares and spots on the sun’s surface, which is 5,505°C and approximately 93million miles (150million km) away from Earth. ‘Right now solar activity is at its maximum, but not its most spectacular.' The sun's power in all its glory: Nasa captures 'best-ever' images of powerful solar X-flare.