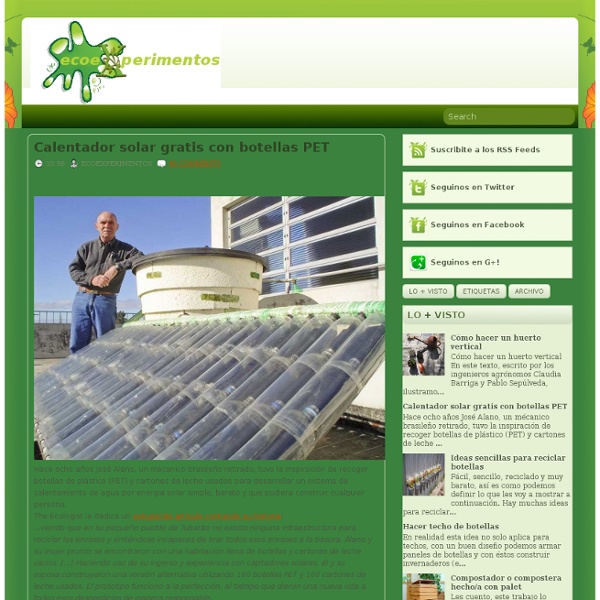 Solar Thermal – An Old Concept for Today’s World | GreenBuildTVGreenBuildTV Some people think the concept of solar thermal is radically new. Truth is – people have been using the power of the sun for decades to provide hot water. But catching the sun’s rays hasn’t always been an easy task. Throughout the years, many creative solutions have been devised to help generate solar-heated water. Early on, people used a black-painted water tank, mounted on a roof, to gather the sun’s rays. A few of the more common solar thermal collectors today include: the flat plate, evacuated tube, and parabolic trough. Flat Plate Collectors Developed and in use since the 1950′s, flat plate collectors remain the most common type of solar thermal collector. Plates are usually constructed of copper or aluminum, though some polymers can also be used, especially in climates susceptible to freezing. Evacuated Tube Collectors Evacuated tube collectors have been in use for the last thirty years. Parabolic Trough Which system is right for me?

7 Solar Water Heating System Designs by Michael Hackleman (Rob Harlan is a general and solar contractor with 25 years of experience with solar water heating systems in Mendocino County, California. Rob primarily designs and installs photovoltaic systems today.) MH: Rob, will you give a brief history of the last 30 years of solar-water heating system design and implementation? Rob: Solar-water heating systems got a real boost in the 1970s when tax credits were offered by state and federal programs to help folks make the investment. These systems were intended primarily for domestic hot water, i.e., showers, dishwashing, cooking, and clotheswashing. They were also popular for heating the water in pools and hot tubs. MH: As I recall, a lot of manufacturers also disappeared when the tax credits went away. Rob: Some designs were indeed flawed—poorly implemented, overly complex, or incorporating untested ideas. Rob: And—on active systems, a controller turns a pump on and off as solar heat is available. Rob: Freezing protection. Rob: True. 1. 2. 3.

15kw Solar Power Plant This is a big stack of mirrors, but look how simply the heat of the sun redirected can generate enough heat to power a 15kw Steam powered generator! Love this! Watch This Video: Other Great Stories From Offgridquest.com: Not too bright – The 12 volt Tiny House Option One aspect of construction that I neglected when building Tiny House Ontario was what I would do about electricity. To tell you the truth electricity scares me because it carries the power of fire. Even so, I thought about it enough to know that I did not want to be on grid, and that I wanted to do it myself. After living there, two seasonal years, I knew that my need for electricity was very limited. On a whim, because there was a fantastic sale, I decided on a small solar panel from Canadian Tire. After my success, I decided that I would not invert my power when it entered the house because the power that is lost to the inverter is quite something. It was not easy for me to figure out how to get this, but it turns out that I got all of these items at a marine supply store. It was not a fast job to put in the wiring. As far as cost goes, all the materials, including fixtures, cost roughly $1200 in Canadian, plus 15% tax which is less than the cost of one Hydro pole.

Is this the Breakthrough that Finally Kills 'Big Oil' and Brings Solar Power to the World? The days of bulky, expensive solar panels that were heavy and required harsh chemicals to produce and a lot of labor to install may be coming to an end. Scientists in Australia have been able to produce the largest ever printed solar cells using a newly developed solar cell printer. Yes, they are printing solar cells. The cells are flexible, cheap, and made from organic plastics and materials. According to scientist Dr Scott Watkins, printing cells on such a large scale opens up a huge range of possibilities for pilot applications: “There are so many things we can do with cells this size[…]We can set them into advertising signage, powering lights and other interactive elements. We can even embed them into laptop cases to provide backup power for the machine inside.” Dr. “Eventually we see these being laminated to windows that line skyscrapers. Image: VICOSC’s new solar cell printer installed at CSIRO. “The consortium is currently only purchasing materials on a research scale. $1 per watt?

A fully transparent solar cell that could make every window and screen a power source Healthy News and Information by KRIS GUNNARS I love it when I learn new things from the comments people leave on my site. About two weeks ago, I wrote an article about coconut oil – an awesome tropical oil with many health benefits. A few people commented that they use coconut oil for something called Oil Pulling – which is kind of like using an oil as mouthwash. Apparently, there are quite a few studies that support this process and a lot of people swear by it. It is claimed to whiten your teeth, make your breath fresher and lead to massive improvements in oral health. What is Oil Pulling and How Does it Work? Oil pulling involves swishing oil around the mouth and has been used for thousands of years as an Indian folk remedy. There are actually thousands of different types of bacteria in the mouth. Having some plaque on your teeth is normal, but if it gets out of hand it can cause all sorts of problems, including bad breath, yellow teeth, gum inflammation, gingivitis and cavities. I Personally Prefer Coconut Oil 1.