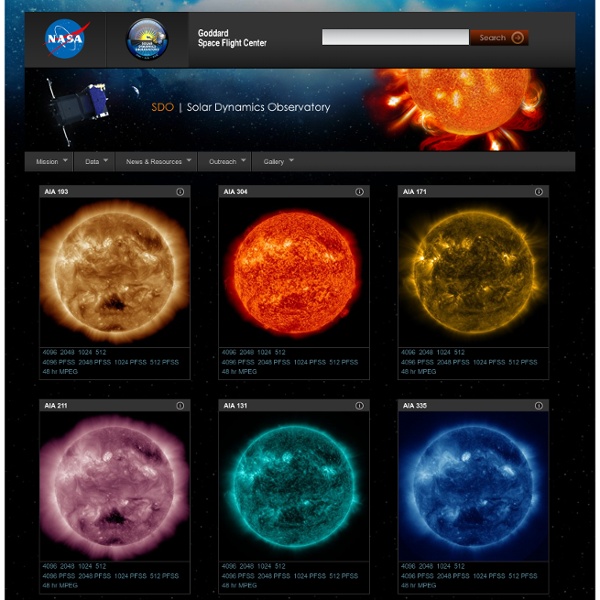 Le Soleil - SpaceWeather live Real-time plots auroral activity Welcome on SpaceWeatherLive! Below you will find the status of the solar wind and the Interplanetary Magnetic Field (IMF) from the past two hours as measured by the ACE spacecraft. These parameters are the first parameters used to predict auroral activity. The redder the plots get, the better it is for auroral activity! The numbers after the word ''ETA'' on each plot shows how long it will take for the solar wind to propagate from ACE to Earth. Sunspot AR1944: Bigger than Earth. A few days ago, a sunspot appeared over the western edge of the Sun. Dark and foreboding, like a malevolent eye, Active Region 1944 (or just AR1944) is huge, actually a cluster of more than 60 individual sunspots, one of which is far, far larger than the Earth itself. It’s been cloudy here in Boulder, Colo., the past few days, but this morning it cleared up.

Image: Black hole outburst in spiral galaxy M83 (Phys.org) -- NASA's Chandra X-ray Observatory has discovered an extraordinary outburst by a black hole in the spiral galaxy M83 (Messier 83), located about 15 million light years from Earth. Using Chandra, astronomers found a new ultraluminous X-ray source, or ULX. These objects give off more X-rays than most normal binary systems in which a companion star is in orbit around a neutron star or black hole. Messier 83 is a barred spiral galaxy approximately 15 million light years away in the constellation Hydra. It is one of the closest and brightest barred spiral galaxies in the sky, making it visible with binoculars. Six supernovae have been observed in M83.

Astronomy Picture of the Day Discover the cosmos! Each day a different image or photograph of our fascinating universe is featured, along with a brief explanation written by a professional astronomer. 2016 April 15 Mammoth sunspot erupts with X1-flare Huge sunspot region 1944 rotated to the center of the sun’s disk today Jan. 7. This photo was taken at noon by the Solar Dynamics Observatory. The largest spot in the group is big enough to see with the naked eye using a safe solar filter like a #14 welder’s glass. Credit: NASA That huge sunspot we talked about two days ago erupted today at 12:32 p.m. with a powerful X-class flare.

LISS - Live Internet Seismic Server These data update automatically every 30 minutes. Last update: April 13, 2014 07:09:31 UTC Seismograms may take several moments to load. Click on a plot to see larger image. CU/ANWB Willy Bob, Antigua and Barbuda Sun Unleashes X6.9 Class Flare Sun Unleashes X6.9 Class Flare On August 9, 2011 at 3:48 a.m. EDT, the sun emitted an Earth-directed X6.9 flare, as measured by the NOAA GOES satellite. These gigantic bursts of radiation cannot pass through Earth's atmosphere to harm humans on the ground, however they can disrupt the atmosphere and disrupt GPS and communications signals. In this case, it appears the flare is strong enough to potentially cause some radio communication blackouts.

Space Weather Prediction with Cosmic Rays Introduction This Website is a gateway for space weather displays based upon cosmic ray data returned by the Spaceship Earth network of neutron monitors and from the worldwide muon detector network. The top of the site contains reduced versions of the plots that we consider most relevant for space weather prediction. Click any plot to obtain an enlarged version.

TWC's Exclusive TOR:CON Index Thunderstorm Outlook The Weather Channel's Severe Weather Expert, Dr. Greg Forbes (Facebook | Twitter) developed the TOR:CON index to estimate the risk of a tornado on a given day or night near your area.