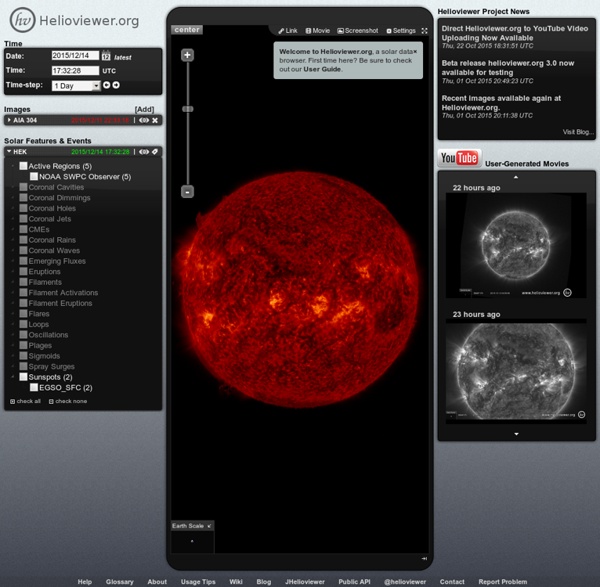 Welcome to Helioviewer.org, a solar data browser. First time here? Be sure to check out our User Guide. Earth Scale center Link

Comet ISON Observing Campaign I'll just say this upfront right now: whatever you read in the following blog post, please feel free to assume it is completely incorrect and the truth is actually quite contrary to what I'm saying. It has been - and continues to be - one of those days. So this will be a relatively brief blog post because we're up to our necks in media inquiries and attempting to do real science to figure out the mystery that is comet ISON, and Matthew and I are basically the only ones that have abandoned our loved ones on this US national Holiday and continued to work. Here's what we know so far: After impressing us yesterday, comet ISON faded dramatically overnight, and left us with a comet with no apparent nucleus in the SOHO/LASCO C2 images.

LISS - Live Internet Seismic Server These data update automatically every 30 minutes. Last update: April 13, 2014 07:09:31 UTC Seismograms may take several moments to load. Click on a plot to see larger image. Comet ISON: The Zombie Comet who Refuses to Die Image Credit: NASA/SOHO It is now confirmed; the reports of ISON’s demise have been greatly exaggerated. It is still kicking, and it’s still very bright. We had a flurry of predictions yesterday regarding the fate of the famous comet. Initially, ISON disappeared completely from our field of view, leading many astronomers to speculate that the comet had completely disintegrated just before it’s rendezvous with the Sun.

Antarctic ice melting 10 times faster than 600 years ago Updated Mon 15 Apr 2013, 11:10am AEST A report has found that the Antarctic summer ice melt is now occurring 10 times faster than it did 600 years ago. Scientists from the British Antarctic Survey and the Australian National University drilled a 360-metre ice core near the northern tip of the peninsula to to identify past temperatures. Comet ISON Observing Campaign [Please note: this article was submitted AUGUST 12, 2013... not December 8, 2013. I realize the above mm/dd/yy date format is confusing to those that use the dd/mm/yy format. Sorry!] Well this is rather exciting news: Comet ISON lives on! (we think...) For several weeks now, ground-based observers have been blind to Comet ISON as our local star was sitting directly between us and the comet.

Space Calendar (JPL) 2014 [ Mar | Apr | May | Jun | Jul | Aug | Sep | Oct | Nov | Dec ] 2015 [ Jan | Feb | Mar | Apr ] Welcome to the Space Calendar! The Space Calendar covers space-related activities and anniversaries for the coming year. Acceleration of snow melt in an Antarctic Peninsula ice core during the twentieth century : Nature Geoscience Over the past 50 years, warming of the Antarctic Peninsula has been accompanied by accelerating glacier mass loss and the retreat and collapse of ice shelves. A key driver of ice loss is summer melting; however, it is not usually possible to specifically reconstruct the summer conditions that are critical for determining ice melt in Antarctic. Here we reconstruct changes in ice-melt intensity and mean temperature on the northern Antarctic Peninsula since AD 1000 based on the identification of visible melt layers in the James Ross Island ice core and local mean annual temperature estimates from the deuterium content of the ice. During the past millennium, the coolest conditions and lowest melt occurred from about AD 1410 to 1460, when mean temperature was 1.6 °C lower than that of 1981–2000. Since the late 1400s, there has been a nearly tenfold increase in melt intensity from 0.5 to 4.9%.