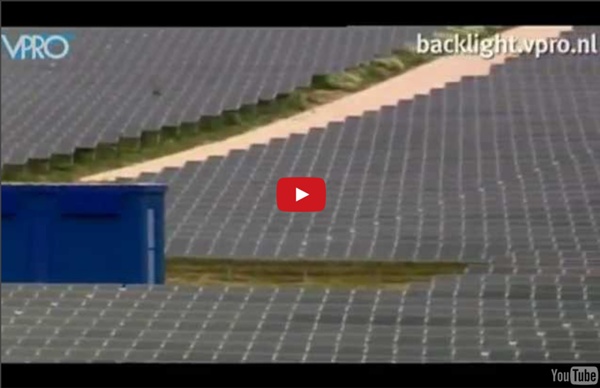 Homemade Solar panels At the end, the solar absorber is painted black and placed in the diy solar panels casing. The casing is covered with plexiglass that we attach to the frame and thoroughly corked with silicone. Polycarbonate / plexiglass is slightly convex in order to gain greater strength. You can see installed solar absorber without plexiglass in picture 18. Complete solar collector is shown on Picture 19, and finally, installed solar system can be seen in Picture 20. On YouTube you can see how our diy pop-can solar panels work. Important note: Our solar system is not able to accumulate thermal energy after producing it. Differential thermostat (snap disc) controls the fan. If on/off temperatures are set carefully, diy solar panels are able to produce an average 2 kW of energy for home heating. Dress rehearsal of solar collectors carried out in the backyard before installing the system on the house.

A fully transparent solar cell that could make every window and screen a power source Healthy News and Information by KRIS GUNNARS I love it when I learn new things from the comments people leave on my site. About two weeks ago, I wrote an article about coconut oil – an awesome tropical oil with many health benefits. A few people commented that they use coconut oil for something called Oil Pulling – which is kind of like using an oil as mouthwash. It is claimed to whiten your teeth, make your breath fresher and lead to massive improvements in oral health. What is Oil Pulling and How Does it Work? Oil pulling involves swishing oil around the mouth and has been used for thousands of years as an Indian folk remedy. There are actually thousands of different types of bacteria in the mouth. Having some plaque on your teeth is normal, but if it gets out of hand it can cause all sorts of problems, including bad breath, yellow teeth, gum inflammation, gingivitis and cavities. I Personally Prefer Coconut Oil Traditionally, the Indians used other oils such as sesame oil or sunflower oil. How to Oil Pull 1. 2. 3.

So Cool! SolarPod panels can be installed Without Drilling A Single Hole A recent press release reveals that the first-of-its-kind SolarPodTM has gotten UL certification. The SolarPodTM group of products is the first offer for US retail and commercial markets that provides no roof penetration, particularly helpful for sloped roofs (SolarPodTMCrown). The no-penetration SolarPod Crown cuts installation cost while at the same time achieving dependable reliability. SolarPodTM is completely modular, and quickly and easily integrates into your existing electrical system. If your energy needs grow with your home or business, additional SolarPodsTM can be installed in series to the existing setup with minimal effort. The entire series only requires one 240V electrical hookup. The prefabricated quick install solar solution dramatically reduces utility scale and commercial installations. You can watch our easy installation videos. An entire SolarPodTM Grid Tied installation takes only two hours!

Spherical Solar Solar Sphere Concentrated photovoltaic (CPV) technology never looked so good. The Rawlemon Solar Energy Generator was a finalist in the World Technology Network Award Dec, 2013. The inventor, German born, Barcelona-based architect André Broessel, with his first large scale prototype, which sits a top his Barcelona apartment building. Because of the concentration of light, the cell area under the water-filled orb is 75 to 95% smaller than a flat pvc with the same output. The device incorporates a fully rotational weatherproof natural optical tracking device that functions on inclined surfaces and curtain walls, therefore any sun-facing building surface will be suitable for application. From their Indiegogo campaign, which was fully funded. indiegogo.com Facade modules can replace south facing windows. A single LED light conversing with the moon. This micro version can concentrate diffuse light, such as that from a cloudy day.

The Solar Conundrum The Solar Conundrum: heat decreases the production of electrical energy in PV. Hybrid Vacuum Tubes.By efficiently drawing heat away from the solar panel for space heating, hot water, de-salination and cooling the photovoltaic cells are maintained at an optimum operating temperature. This results in significantly higher electrical output than standard photovoltaic panels. This type of device is commonly referred to as PVT. Both energy outputs are optimized replacing the need for two separate conventional panels (PV and Thermal), dramatically reducing installation time and cost whilst maximizing useable installation area. Through its unique patent pending design, V3Solar is able to concentrate up to 150X more sunlight on 1X sun mono PV without the cells overheating. Light is transferred to electricity in nanoseconds. The V3Solar patent pending design also delivers a higher level of efficiency from PV.

7th Grader mimics Nature 13 year old copies Nature to Improve Solar Performance Thirteen year old Aidan Dwyer was walking in the woods in Upstate New York in the winter and noticed a spiral pattern to tree branches. Aidan realized the tree branches and leaves had a mathematical spiral pattern that could be shown as a fraction. After some research he also realized the mathematical fractions were the same numbers as the Fibonacci sequence. "On the oak tree, the Fibonacci fraction is 2/5, which means that the spiral takes five branches to spiral two times around the trunk to complete one pattern. Aidan's backyard in Northport, NY. The 7th grader next wondered why nature used such a pattern? Aidan discovered that the Fibonacci pattern helps deciduous trees, in higher latitudes, efficiently track the Sun and collect the most sunlight even in the thickest forest, on the cloudiest days. The American Museum of Natural History has awarded Aidan a Young Naturalist Award for 2011.

South African team may have solved solar puzzle even Google couldn't crack | Environment It is a problem that has so far stumped even Google’s brainy engineers – how to generate cheap solar electricity using a small-scale array of mirrors to concentrate the sun’s energy. Now a team at a South African university – led by a former Intel strategic planner – believes they have cracked it. Once they have completed a prototype system in October they have big plans for rolling out the technology. The idea behind the design – so-called Concentrated Solar Power or CSP – is simple. A field of mirrors on the ground tracks the sun and concentrates its rays on to a central point which heats up. There are a handful of large-scale examples of such solar plants around the world generating electricity, and there are predictions that the technology could generate a quarter of the world’s energy by 2050. Paul Gauché is the South African founding director of the Solar Thermal Research Group at Stellenbosch University that is testing a new approach.

Off Grid Solar Living: Lessons in Energy Efficiency This story is meant to provide information about off grid living, meant to teach you or inspire you. I get a lot of people that ask me ‘What’s it like to live off the grid?’ I think a lot of people picture us huddled around a candle in darkened cabin in the middle of the woods. Well for the first couple weeks we moved into our home, that’s exactly what it was like! But we’ll get to that. Off Grid or Off Our Rocker? A few years back, we grew tired of the city and noise and hassle that came with it. But there were other houses in the neighborhood running on solar kits and small wind generators and we naively thought ‘How hard could it be?’. Oh, You Mean We Need Sunshine? We chose to move into our home in the winter that our little hamlet would break the record for snowfall in one year. And worse, our builder had suggested a forced air electric furnace for our modular home to save money. Altitude Adjustment We learned that EVERYTHING needed to be on power strips. via SustainaBlog