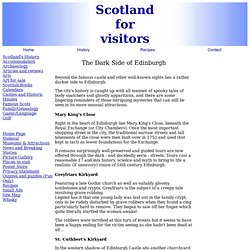 The city's history is caught up with all manner of spooky tales of body snatchers and ghostly apparitions, and there are some lingering reminders of these intriguing mysteries that can still be seen in its more unusual attractions. GUEST BLOG The Darker Side Of Edinburgh. Author Brian Ruckley has just written a new horror novel based in Edinburgh. 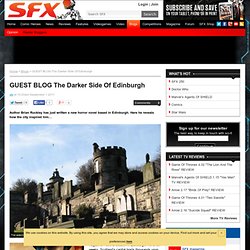 Here he reveals how the city inspired him… The watchtower in Edinburgh graveyard © Brain Ruckley August is Festival season in Edinburgh. For a few weeks, Scotland’s capital hosts thousands upon thousands of international visitors, drawn by the world’s largest arts festival. I love the place, but not just for its beauty and summer, arty energy; I like its age, too, and the dark, complicated texture of its history. One of the city pubs that attracts more than a few tourists to sample Scottish hospitality is called Deacon Brodie’s.

It’s said that Deacon Brodie’s sinister double life inspired Robert Louis Stevenson (an Edinburgh native) to write Jekyll and Hyde. Burke and Hare weren’t strictly bodysnatchers at all, though. Executions in Scottish prisons. Famous Streets in Scotland : The Cowgate in Edinburgh. The vaults were completed in 1788 and contained taverns, brothels, workshops and storage space. However they were damp and had poor quality of air. The walls were built of igneous basalt rock from the nearby Salisbury Crags. Tough material indeed but unexpectedly porous to the wet Scottish weather which caused flooding. Haunted Edinburgh 1 - Edinburgh Past And Present. Edinburgh Vaults. Welcome to Underground Edinburgh. Murder and Mystery Walking Tour of Edinburgh in Edinburgh, Scotland. Take a look at Edinburgh's dark side, including tales of witchcraft, plague and torture on this Murder and Mystery Walking Tour of Edinburgh. 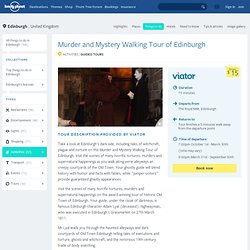 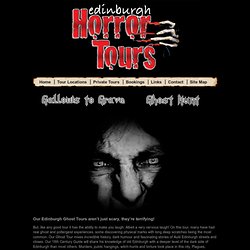 But, like any good tour it has the ability to make you laugh. Albeit a very nervous laugh! On this tour, many have had real ghost and poltergeist experiences, some discovering physical marks with long deep scratches being the most common. Ghost Tours and Walking Tours in Edinburgh, Scotland. Welcome to Mercat Tours. Shakespeare's death mask on display for 1st time at University of Edinburgh exhibition.

Death masks of Sir Walter Scott and Sir Isaac Newton also on display at University of Edinburgh’s Anatomy Museum By George Mair and Rebecca Seales Updated: 09:29 GMT, 23 January 2012 A cast taken from the face of William Shakespeare is to go on display for the first time later this month. 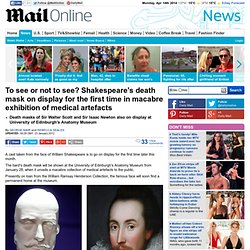 The bard's death mask will be shown at the University of Edinburgh's Anatomy Museum from January 28, when it unveils a macabre collection of medical artefacts to the public. Presently on loan from the William Ramsay Henderson Collection, the famous face will soon find a permanent home at the museum. Immortalised in life and death: This painting (right) is believed to date from 1610, when Shakespeare was in his mid-forties. Visitors can also cast an eye over the death masks of Scottish writer Sir Walter Scott, world-famous physicist Sir Isaac Newton, and King George III. When the pair were caught, Hare was offered immunity from prosecution if he confessed and agreed to testify against his former partner. Rose Garnett Stories From Dead Central. Rose Garnett (Author): “The ‘wee pretendy parliament’ may turn into a real one” Year after year Edinburgh entertains tourists with horror stories plucked from a tantalisingly blood-soaked past: from the double-life of Deacon Brodie all the way through to the sad spectres that haunt Mary King’s Close and the underground vaults. 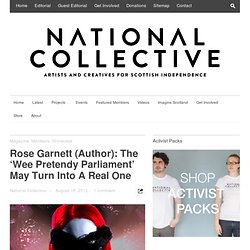 But the supply of horror stories appears to be finite, not least because it would appear no aspiring authors want to dirty their hands in the more grisly seams of Edinburgh’s, or indeed Scotland’s history. The result: no fresh hell for the here and now. To abuse and dislocate Alasdair Gray’s Lanark, no one imagines being scared witless in Edinburgh – at least, not anymore. We are content it seems to endlessly wallow in the past instead of using it as the raw material to imagine the present. One can only wonder what Robert Louis Stevenson and James Hogg would have made of it all had they been alive. But help is at hand. Enter Rose Garnett, personifying a renewal of Scottish Urban Horror, that is to say, modern horror set in Scotland. Deacon Brodie. Burke & Hare.