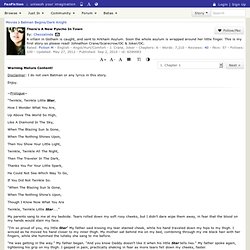 Disclaimer: I do not own Batman or any lyrics in this story. Enjoy. ~Prologue~ The Joker's New Pet Chapter 1: Kidnapped!, a batman begins/dark knight fanfic. Ok this takes place after "The Dark Knight. 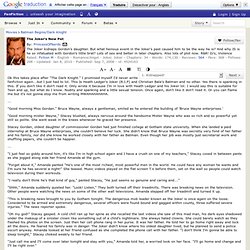 " I promised myself I'd never write fanfiction again...but I just had to lol. This Is Heath Ledger's Joker (R.I.P) and Christian Bale's Batman and no other. The Heart Behind the Madness Chapter 1, a batman begins/dark knight fanfic. The Clown And The Cat Chapter 1: Her First Big Heist!, a batman begins/dark knight fanfic. Was bored and haven't seen a Joker/Catwoman lemon yet so thought it would be fun. 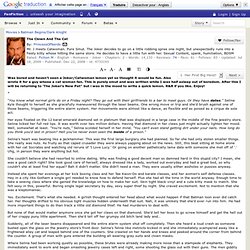 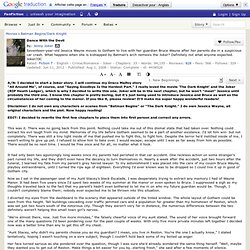 I will continue my Draco Malfoy story "All Around Me", of course, and "Saying Goodbye Is the Hardest Part. " I really loved the movie 'The Dark Knight' and the Joker (RIP Heath Ledger), which is why I decided to write this one. Joker will be in the next chapter, but he won't "meet" Jessica until probably the third one. I know this chapter is pretty boring, but it's just being used to introduce Jessica and Bruce as well as the circumstances of her coming to the manor. If you like it, please review! Disclaimer: I do not own any characters or scenes from "Batman Begins" or "The Dark Knight.

" EDIT: I decided to rewrite the first few chapters to place them into first person and correct any errors. This was it. It had only been two agonizingly long weeks since my parents had perished in that car accident. Now as I sat in the passenger seat of my Aunt Stacey's black Escalade, I was desperately trying to extract any memory I had of Wayne Manor. 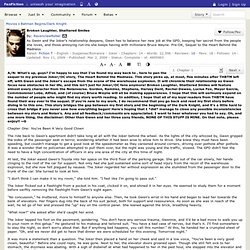 I'm happy to say that I've found my way back to , here to pen the sequel to my previous Joker/OC story, The Heart Behind the Madness. This story picks up, at most, five minutes after THBTM left off, with Gwen and the Joker's escape from the scene of the warehouse explosion. It will chronicle their relationship as Gwen faces new obstacles in her life, and this isn't just for Joker/OC fans anymore! Broken Laughter, Shattered Smiles will feature almost every character from the Nolanverse. Gordon, Ramirez, Stephens, Harvey Dent, Rachel Dawes, Lucius Fox, Mayor Garcia, Commissioner Lobe, Alfred, and (of course) Bruce Wayne will all be making appearances. Chapter One: You've Been A Very Good Clown The ride back to Gwen's apartment didn't take long at all with the Joker behind the wheel. At last, the Joker eased Gwen's Toyota into her space on the third floor of the parking garage. 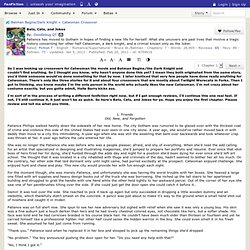 So I thought you know, why hasn't anyone done this yet? I mean they both originated from the same story, you'd think someone would've done something for that by now. I later knoticed that very few people have done really anything for Catwoman. There's only like three stories for it and about four crossovers that are mostly about Twilight Werecats in Forks. Then I got to thinking, you know maybe I'm the only person in the world who actually likes the new Catwoman.

I'm sort of in the process of writing a different fanfiction right now, but if I get enough reviews, I'll continue this one real fast. 1. Patience Phillips walked hastily down the sidewalk of her new home. She was no longer the Patience she was before who was a people pleaser, afraid, and shy of everything. Beauty and the Beast Chapter 1, a batman begins/dark knight fanfic. Michelle sighed as she climbed into the front seat of Coleman Reese's overpriced sports car. 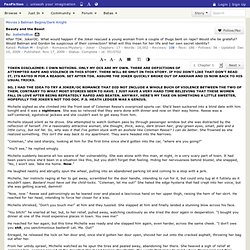 She'd been suckered into a blind date with him tonight and it was a nightmare. She was so relieved that they were done with dinner and now on their way home. Reese was a self-centered, egotistical jackass and she couldn't wait to get away from him. Michelle stayed silent as he drove. She attempted to watch Gotham pass by through passenger window but she was distracted by the reflection of herself. "Coleman," she said sharply, looking at him for the first time since she'd gotten into the car, "where are you going? " "You'll see," he replied smugly. Michelle suddenly became all too aware of her vulnerability. He laughed nastily and abruptly spun the wheel, pulling into an abandoned parking lot and coming to a stop with a jerk.

Michelle, her instincts raging at her to get away, scrambled for the door handle, intending to run for it, but could only tug at it futilely as it wouldn't open.