The impact of the sugar tax in Chile: A bittersweet success? A new sugar tax introduced on soft drinks in Chile has been effective in reducing consumption of sugary drinks, new research carried out in the country has revealed. However, the international research team, led by academics from the University of York, say although consumption may have dropped, it may not be enough to reduce socioeconomic inequalities in diet-related health. A growing number of cities and countries have adopted taxes on sugary drinks to help combat sugar consumption, which is blamed for rising obesity levels. The tax was introduced in Chile in 2014. The team analysed household grocery purchasing data from Chile for three years before the tax was introduced and for one year afterwards.

The policy targeted any non-alcoholic beverages to which colourants, flavourings or sweeteners have been added. The study revealed an overall 21.6% decrease in the monthly purchased volume of the higher taxed, sugary soft drinks. GPs should not worry about offending obese patients, finds study. GPs who raise the issue of their patients’ obesity in the surgery will not offend them and are likely to help them reach a healthy weight, a new study has shown. 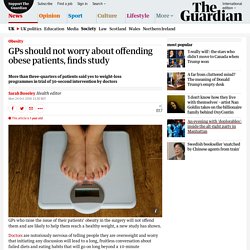 Doctors are notoriously nervous of telling people they are overweight and worry that initiating any discussion will lead to a long, fruitless conversation about failed diets and eating habits that will go on long beyond a 10-minute consultation. More than 130 GPs who took part in the trial, involving more than 1,800 patients, were asked to start a conversation that might go like this: GP: While you’re here, I just wanted to talk about your weight. You know the best way to lose weight is to go to [a weigh-management programme such as Slimming World or Rosemary Conley] and that’s available free on the NHS? After a Debacle, How California Became a Role Model on Measles. Nudging people to make good choices can backfire. Nudges are a growth industry. 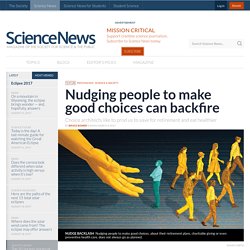 Inspired by a popular line of psychological research and introduced in a best-selling book a decade ago, these inexpensive behavior changers are currently on a roll. Policy makers throughout the world, guided by behavioral scientists, are devising ways to steer people toward decisions deemed to be in their best interests. These simple interventions don’t force, teach or openly encourage anyone to do anything. Instead, they nudge, exploiting for good — at least from the policy makers’ perspective — mental tendencies that can sometimes lead us astray. Zonination/perceptions: Perceptions of Probability and Numbers. How You Make Decisions Can Affect Your Patience - Dietrich College of Humanities and Social Sciences. Decisionsciencenews.

Main The R-Index blog was created by Ulrich Schimmack and aims to increase the replicability of published results in psychological science. 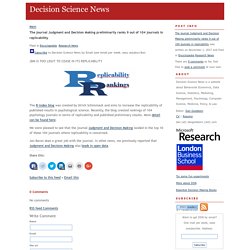 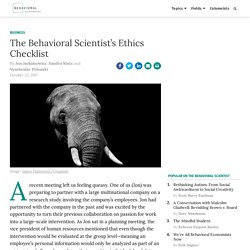 One of us (Jon) was preparing to partner with a large multinational company on a research study involving the company’s employees. Jon had partnered with the company in the past and was excited by the opportunity to turn their previous collaboration on passion for work into a large-scale intervention. As Jon sat in a planning meeting, the vice president of human resources mentioned that even though the intervention would be evaluated at the group level—meaning an employee’s personal information would only be analyzed as part of an aggregate of all employee data—their sensitive individual-level data, such as the intention to leave and level of burnoutwould be reviewed by each employee’s manager, as well as local human resource teams.

In other words, as part of an experiment examining how to increase their passion for work, employees were expected to provide sensitive information about their experience at the company. The takeaway? Should High Schools Require a Post-Graduation Plan? Approximately 40 percent of students in a Chicago public school graduate without an idea of what they’ll do next. 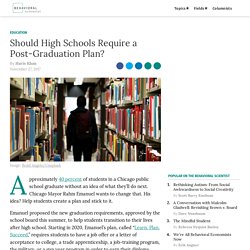 Chicago Mayor Rahm Emanuel wants to change that. His idea? Nudges are Cheap in the Same Way Medicines are Cheap. In the majority of presentations on applied behavioral science, it is strongly emphasized the fact that Nudges are low-cost (cheap) interventions/ changes that have a disproportionally large impact on the desired outcome. 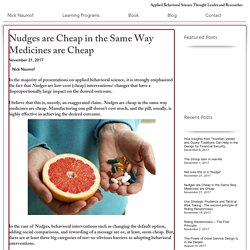 I believe that this is, mostly, an exaggerated claim. Nudges are cheap in the same way medicines are cheap. Manufacturing one pill doesn’t cost much, and the pill, usually, is highly effective in achieving the desired outcome. In the case of Nudges, behavioral interventions such as changing the default option, adding social comparisons, and rewording of a message are or, at least, seem cheap. Theconversation. On Oct. 9, Richard Thaler of the University of Chicago won the Nobel Prize for his extraordinary, world-transforming work in behavioral economics. 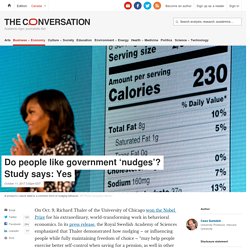 In its press release, the Royal Swedish Academy of Sciences emphasized that Thaler demonstrated how nudging – or influencing people while fully maintaining freedom of choice – “may help people exercise better self-control when saving for a pension, as well in other contexts.” In terms of Thaler’s work on what human beings are actually like, that’s the tip of the iceberg – but it’s a good place to start. In 2008, Thaler and I wrote “Nudge,” emphasizing the massive potential of seemingly small interventions that steer people in particular directions but that also allow them to go their own way. Nobody minds a gentle nudge, except in the wrong direction. We live in a time when government seems to have the Sadim touch: everything politicians lay their hands on turns into the opposite of gold. 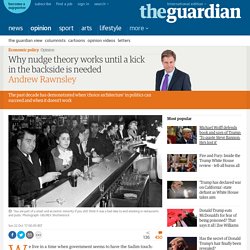 So it is a pleasant surprise when a significant piece of policy affecting the futures of millions of people is working as intended. Many folk park pensions in that segment of the brain where they keep things they know to be important, but find boring. Many folk would prefer to spend any surplus income today rather than save it for tomorrow. Decisionsciencenews. Main We came across this article that looks at the relationship between sharing data and other variables of interest. 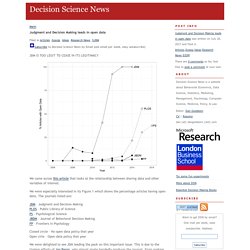 We were especially interested in its Figure 1 which shows the percentage articles having open data. Governments are trying to nudge us into better behavior. Is it working? Automatic enrollment in green energy, with an ability to opt out, is an example of what behavioral scientists call a “nudge.” 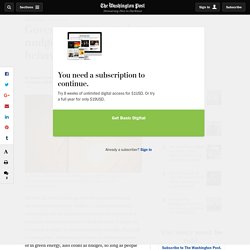 How Uber Uses Psychological Tricks to Push Its Drivers’ Buttons - The New York Times. The secretive ride-hailing giant Uber rarely discusses internal matters in public. But in March, facing crises on multiple fronts, top officials convened a call for reporters to insist that Uber was changing its culture and would no longer tolerate “brilliant jerks.” Notably, the company also announced that it would fix its troubled relationship with drivers, who have complained for years about falling pay and arbitrary treatment. When Negotiating a Price, Never Bid with a Round Number - HBS Working Knowledge - Harvard Business School. Here’s an easy tip for anyone negotiating to buy a car, a house, or even a company. When you make an initial offer, don’t bid with a round number like $10,000 or $1 million or $15 per share. Rather, bid with a more precise number, like $9,800 or $1.03 million or $14.80 per share.

According to a recent study of mergers and acquisitions, investors who offer “precise” bids for company shares yield better market outcomes than those who offer round-numbered bids. “If one party gives a round number, it gives the signal that the party doesn’t really know what it’s doing” Most of us are overconfident about how much we understand things – this simple intervention can help – Research Digest. “True wisdom is knowing what you don’t know” Socrates. When we’re asked how much we understand the workings of everyday things like vacuum cleaners or computer printers, most of us massively overestimate our own knowledge. This overconfidence extends beyond objects to more abstract matters, such as our comprehension of political policies, and collectively the phenomenon is known as “the illusion of explanatory depth”. One already established antidote is to ask people produce a detailed explanation of whatever it is that they think they understand – after doing this, most of us come to realise the true modesty of our knowledge.

Sorry to say, but your pilot’s decisions are likely just as irrational as yours and mine – Research Digest. Flying a plane is no trivial task, but adverse weather conditions are where things get seriously challenging. Tragically, a contributing factor to many fatal accidents is when the pilot has misjudged the appropriateness of the flying conditions. Now in a somewhat worrying paper in Applied Cognitive Psychology Stephen Walmsley and Andrew Gilbey of Massey University have shown that pilots’ judgment of weather conditions, and their decisions on how to respond to them, are coloured by three classic cognitive biases.

What’s more, expert flyers are often the most vulnerable to these mental errors. Welsh 'deemed consent' organ donation system shows promising results. More Bad News for Fans of Menu Calorie Counts. When New York City enacted its calorie-labeling regulation in July of 2008, the logic made sense. By forcing chain restaurants with 15 or more locations to give consumers information about foods' calorie contents, it would allow people to make smarter, better-informed decisions about their eating habits. Alas, as with many other awareness-raising efforts, the evidence that calorie counts lead to smarter nutritional decisions isn't very strong. How do common medications influence moral decisions? Daniel Kahneman: ‘What would I eliminate if I had a magic wand? Overconfidence’ Expert philosophers are just as irrational as the rest of us.

Theconversation. The Liberal Democrats have been left reeling by the collapse of their vote in the 2015 election, which has left them with just eight MPs in parliament. Surge in vehicles being clamped since tax disc abolition, data shows. The number of drivers whose vehicles have been clamped for failing to pay vehicle excise duty (VED) has more than doubled since tax discs were abolished, figures have shown. The Driver and Vehicle Licensing Agency (DVLA) said there had been a 166% increase in wheel-clamping operations in the three years to April. It means as many as 160,000 vehicles were clamped for non-payment last year, with many being towed away.

Psephological pseudoscience. In 1948, the American writer E.B. Terry Burnham: A Trick For Higher SAT scores? Unfortunately no. The only thing worse than never having a choice is always having to choose. Q & A With Richard Thaler On What It Really Means To Be A "Nudge" Why we gamble like monkeys. Why Do Many Reasonable People Doubt Science? HPV Vaccination Not Linked to Riskier Sex.

Awareness Is Overrated. “Vaccine Hesitancy”: The PLOS Currents Collection - Speaking of Medicine. How the world could better fight obesity. Close the menu, enjoy your meal more. Risk And Reason. Stirling Behavioural Science Blog : Wet bias in weather reporting. Fighting Crime by Going Cashless. TheWorldImages: Clever idea from the Japanese... Why We Try (And Fail) To Keep Sunk Costs Afloat. What the Dunning-Kruger effect is and isn’t.

Bright idea: Smart street lamps light up only when needed. 20th APS Annual Convention - Inside the Psychologist's Studio with Daniel Kahneman. When prescription works better than proscription. Why does printing cover pages save paper? A decidedly mixed bag. [11] “Exactly”: The Most Famous Framing Effect Is Robust To Precise Wording. Britain’s Ministry of Nudges. [3] A New Way To Increase Charitable Donations: Does It Replicate? Public Policies, Made to Fit People. Mechanical Turk Workers Are Not Anonymous. Climate change will damage your health! Why You’re More Likely to Die After Getting Paid. Thinking in a Foreign Language Makes Decisions More Rational. Magnificent application of game theory on a game show. Cognitive Bias VideoSong. Does nudge policy work? A critique of Sunstein and Thaler.

Dan Ariely&#039;s ITW - Better the devil you know. Women make safer financial decisions when faced with sexual stereotypes. (When) are religious people nicer? Religious salience and the ``Sunday Effect&#039;&#039; on pro-social behavior. Playing by the same rules reduces the differences between humans, chimps and monkeys. We&#039;re Only Human...: &quot;The Piece of Cake Heuristic&quot; How a simple point of grammar could affect our voting decisions. It is human nature to cooperate with strangers - life - 13 June 2011. Just rewards. In Praise Of Vagueness. Daniel Kahneman: 'We're beautiful devices'