Uk.businessinsider. Dark Matter: In Reality, It Could Just Be Unique Atoms. A research paper that was published last year provides an interesting, simple and most importantly traditional answer to the mystery of dark matter. 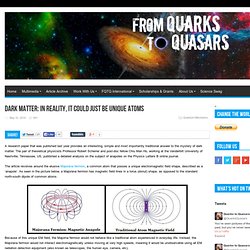 The pair of theoretical physicists Professor Robert Scherrer and post-doc fellow Chiu Man Ho, working at the Vanderbilt University of Nashville, Tennessee, US, published a detailed analysis on the subject of anapoles on the Physics Letters B online journal. The article revolves around the elusive Majorana fermion, a common atom that posses a unique electromagnetic field shape, described as a ‘anapole’. As seen in the picture below, a Majorana fermion has magnetic field lines in a torus (donut) shape, as opposed to the standard north-south dipole of common atoms.

Because of this unique EM field, the Majorna fermion would not behave like a traditional atom experienced in everyday life. As said by Dr. Bouncing neutrons fail to find dark matter or energy. Earlier this year, researchers found the signal of inflation hidden in the cosmic microwave background—the radiative remnants of the Big Bang took a long time to reveal their secrets. 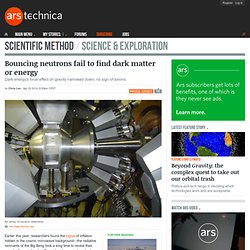 It was a big day. Cosmologists everywhere broke out the Radler, got horrendously drunk, and rioted in front of campus administration buildings. Okay, maybe not—getting drunk while drinking Radler is difficult under the best of circumstances. No, in reality, they went back to work. Even if those results hold up and inflation is as predicted, that still leaves cosmologists missing two pieces of their puzzle: dark matter and dark energy. Three forces walk into a bar. Fermi telescope detects signal that could be annihilating dark matter.

Researchers using data obtained by the orbiting Fermi Telescope may have found the first clear, direct evidence of dark matter in our own galaxy. 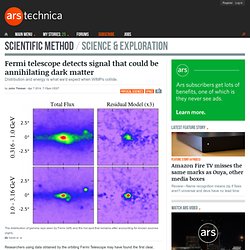 The signal comes in the form of an excess of gamma rays coming from an area surrounding the galactic core, and it appears to be exactly what we'd expect from a weakly interacting massive particle, or WIMP. Perhaps as significantly, however, there are no known astronomical features that can produce a signal like this. The Universe provides plenty of evidence that dark matter exists. Everything from the behavior of galaxies to the structure of galaxy clusters indicates that there's more matter present than we can detect. We have spotted instances of gravitational lensing by matter in what appears to be largely empty space. But when it comes to identifying the particles that actually comprise dark matter, we've tended to look closer to home. Galactic Mystery – Matter – On the Dark Side. Heralding a new age in the cosmos, Norwegian Kristian Birkeland predicted that the universe likely consisted of an exotic component that would later be called dark matter. 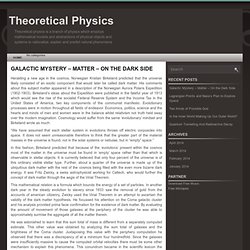 His comments about this subject matter appeared in a description of the Norwegian Aurora Polaris Expedition (1902-1903). Birkeland’s ideas about the Expedition were published in the fateful year of 1913 which would see the rise of the socialist Federal Reserve System and the Income Tax in the United States of America, two key components of the communist manifesto. Evolutionary processes were in motion throughout all fields of endeavor.

Economics, politics, science and the hearts and minds of men and women were in the balance whilst relativism not truth held sway over the modern imagination. Cosmology would suffer from the same ‘evolutionary’ mindset and Birkeland wrote as much: Simulation shows that dark energy and matter can reproduce the Universe. To the best of our ability to tell, the Universe is being shaped by things we can't directly detect: dark matter and dark energy. 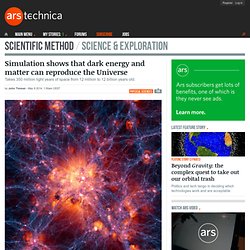 That makes it somewhat challenging to determine if our understanding of these influences is roughly correct. It's simply hard to be confident that we haven't missed some other dark entity that's lurking beyond our abilities of detection. One of the ways we can have some confidence that we're not missing anything major is to run models of the Universe. If we've got the basic physics right, then you should be able to set these models loose at an early point in the Universe's history and end up with something that looks like the Universe we're living in. Dark Energy, Dark Matter. Dark Energy, Dark Matter In the early 1990s, one thing was fairly certain about the expansion of the Universe. 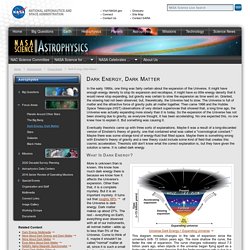 It might have enough energy density to stop its expansion and recollapse, it might have so little energy density that it would never stop expanding, but gravity was certain to slow the expansion as time went on. Granted, the slowing had not been observed, but, theoretically, the Universe had to slow. Dark Matter: The Cosmos' Greatest Mystery Deepens. Like Hollywood legends Audrey Hepburn and Katharine Hepburn, dark energy and dark matter are completely unrelated, even though they share a name. 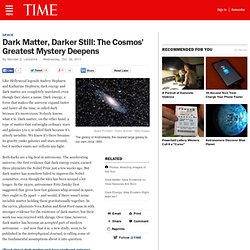 Dark energy, a force that makes the universe expand faster and faster all the time, is called dark because it's mysterious. Nobody knows what it is. Dark matter, on the other hand, a type of matter that outweighs ordinary stars and galaxies 5 to 1, is called dark because it's utterly invisible. We know it's there because its gravity yanks galaxies and stars around, but it neither emits nor reflects any light. Both darks are a big deal in astronomy. Dark-Matter Theory Questioned by Astronomers' New Findings. The theory of dark matter took decades to take hold in astronomy, and no wonder. 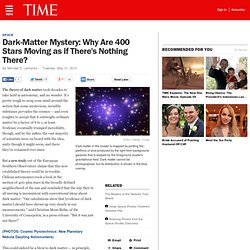 It's pretty tough to wrap your mind around the notion that some mysterious, invisible substance pervades the cosmos — and even tougher to accept that it outweighs ordinary matter by a factor of 6 to 1, at least. Evidence eventually trumped incredulity, though, and by the 1980s, the vast majority of scientists were on board with the idea, nutty though it might seem, and there they've remained ever since. But a new study out of the European Southern Observatory claims that this now established theory could be in trouble. Chilean astronomers took a look at the motion of 400-plus stars in the broadly defined neighborhood of the sun and concluded that the way they're all moving is inconsistent with conventional ideas about dark matter. 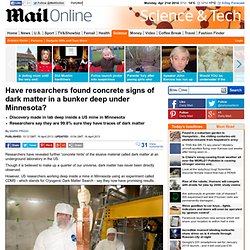 Though it is believed to make up a quarter of our universe, dark matter has never been directly observed. However, US researchers working deep inside a mine in Minnesota using an experiment called CDMS - which stands for Cryogenic Dark Matter Search - say they now have promising results. Alpha Magnetic Spectrometer to release first results. 18 February 2013Last updated at 00:21 ET By Jonathan Amos Science correspondent, BBC News, Boston The AMS was taken up to the ISS in 2011. 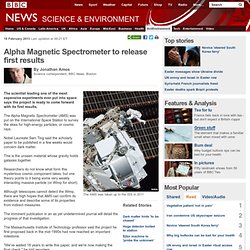 Has Dark Matter Finally Been Found? Big News Soon. Have we found dark matter? Scientist leading $2bn space experiment says results set for release. Dark matter is believed to provide the gravity which binds the cosmosBut if proved to exist it would challenge the conventional view of physicsScientists have attempted to track it down with spectrometer bolted to ISSFirst set of results from the instrument to be published in two weeks By Damien Gayle Published: 10:52 GMT, 19 February 2013 | Updated: 11:39 GMT, 19 February 2013. Astronomers release the largest 3D map of the universe ever created. Unique project will take six years to completeAlready contains details of 200 million galaxies By Mark Prigg Published: 14:56 GMT, 8 August 2012 | Updated: 07:22 GMT, 9 August 2012 Scientists today released a groundbreaking 3D flythrough of the universe, revealing massive galaxies and distant black holes.

The largest map of its kind ever created, researchers hope it can help the investigation of mysterious dark matter and dark energy that make up 96 percent of the universe. Scroll down for video. Mysterious 'dark matter' is mapped at last - showing a 'cosmic web' spanning a billion light years. Is the Sun surrounded by dark matter? New simulation tries to answer one of the universe's biggest mysteries (and the answer: probably) Dark Matter Filament Between Galaxy Clusters Found. This story was updated at 9:32 a.m. EDT on July 5. A giant string of invisible dark matter has been discovered across the universe between a pair of galaxy clusters. The filament forms a bridge between two huge clusters called Abell 222 and Abell 223, which lie 2.7 billion light-years away.

The universe is thought to be filled with such strings of dark matter, a mysterious substance that cannot be seen, only sensed through its gravitational pull. Scientists have made previous attempts to find dark matter filaments, which are predicted by theories that suggest galaxy clusters form at the intersections of filaments. "This is the first time [a dark matter filament] has been convincingly detected from its gravitational lensing effect," said astronomer Jörg Dietrich of the University Observatory Munich, in Germany. "The standard wisdom is that the gravitational lensing of filaments is too weak to be detected with current telescopes," Dietrich told SPACE.com. Dark Matter Filaments Detected In Abell 222 And Abel 223 Supercluster.