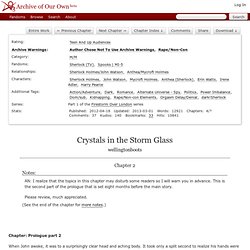 It took only a split second to realize his hands were tied above his head and he was lying on a four poster bed in the middle of an ostentatious room. The walls had gilded panelling that accentuated the ornate frames of the portraits of landscapes, horses and country houses. Flamboyant eighteenth century furniture was artfully arranged in a manner that emphasized the vastness of the room and increased its grandeur. The electric chandeliers were dimmed, casting a soft warm glow over the room that would have provided it with a comfortable atmosphere if John had arrived of his own free will. John was lying on what looked like a silk coverlet in a tasteful shade of gold that complemented the rest of the décor. He tested the bounds that secured him to the bed. "You bastard, what have you done! " Sherlock didn't reply at first but simply walked towards him at a leisurely pace.

Taking Jenny - littleartemis - Supernatural RPF. Black Gut - Chapter 1 - MonsterTesk - Teen Wolf. Why buy the cow when you can get the milk for free? Arthur shuffled nervously where he stood on all fours in the stall. 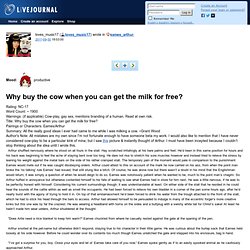 Hay scratched irritatingly at his bare palms and feet. He’d been in this same position for hours and his back was beginning to feel the ache of staying bent over too long. He dare not rise to stretch his sore muscles however and instead tried to relieve the stress by leaning his weight against the metal bars on the side of his rather cramped stall. The temporary pain of the moment would pale in comparison to the punishment Eames would mete out if he was caught disobeying orders. Arthur could attest to this on account of the mark he now carried on his ass, from when the point man broke the ‘no talking’ rule Eames’ had issued, that still stung like a bitch. “Does Artie need a nice blanket to keep him warm?” 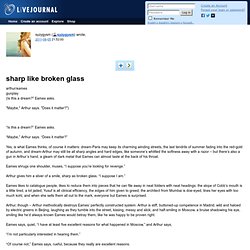 " Eames asks. "Maybe," Arthur says. "Does it matter? ") “Is this a dream?” Eames asks. “Maybe,” Arthur says. Yes, is what Eames thinks, of course it matters: dream-Paris may keep its charming winding streets, the last tendrils of summer fading into the red-gold of autumn, and dream-Arthur may still be all sharp angles and hard edges, like someone’s whittled the softness away with a razor – but there’s also a gun in Arthur’s hand, a gleam of dark metal that Eames can almost taste at the back of his throat. Eames shrugs one shoulder, muses, “I suppose you’re looking for revenge.” Arthur gives him a sliver of a smile, sharp as broken glass. 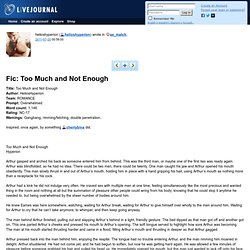 Inspired, once again, by something cherrybina did. Too Much and Not EnoughHyperion Arthur gasped and arched his back as someone entered him from behind. This was the third man, or maybe one of the first two was ready again. Arthur had a kink he did not indulge very often. He knew Eames was here somewhere, watching, waiting for Arthur break, waiting for Arthur to give himself over wholly to the men around him.

The man behind Arthur finished, pulling out and slapping Arthur’s behind in a light, friendly gesture. Arthur pressed back into the man behind him, enjoying the respite. The man in front finished first, and he streaked Arthur’s face with come. “It’s just a big piercing, you’ll manage, love,” Eames reassured him. It was too much for Arthur, the pressure on his prostate. “Shh. “One more. The Only Thing That Was Ever Mine - Chapter 7 - Remy_Writes5 - Sherlock (TV. Pulse. A Sherlock/John PWP. - Ghislainem70 - Sherlock (TV. 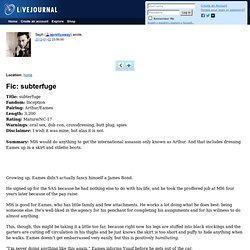 Summary: MI6 would do anything to get the international assassin only known as Arthur. And that includes dressing Eames up in a skirt and stiletto boots. Growing up, Eames didn’t actually fancy himself a James Bond. He signed up for the SAS because he had nothing else to do with his life, and he took the proffered job at MI6 four years later because of the pay raise.

MI6 is good for Eames, who has little family and few attachments. This, though, this might be taking it a little too far, because right now his legs are stuffed into black stockings and the garters are cutting off circulation in his thighs and he just knows the skirt is too short and puffy to hide anything when he walks. “I’m never doing anything like this again,” Eames informs Yusuf before he gets out of the car. Luninosity - new Erik/Charles fic! Here you are, the rest of that thing I've been posting bits of...um, enjoy? 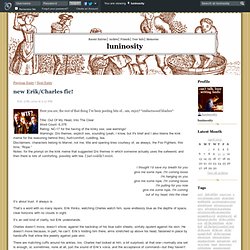 *embarrassed blushes* Title: Out Of My Head, Into The ClearWord Count: 6,378Rating: NC-17 for the having of the kinky sex; see warnings! Warnings: D/s themes, explicit sex, sounding (yeah, I know, but it's brief and I also blame the kink meme for the reasoning behind this), hurt/comfort, cuddling, tea.Disclaimers: characters belong to Marvel, not me; title and opening lines courtesy of, as always, the Foo Fighters; this time, “Rope.”Notes: for the prompt on the kink meme that suggested D/s themes in which someone actually uses the safeword, and then there is lots of comforting, possibly with tea. I just couldn't resist. I thought I’d save my breath for yougive me some rope, I'm coming loose I'm hanging on yougive me some rope, I'm coming looseI'm pulling for you nowgive me some rope, I'm coming out of my head, into the clear It’s about trust.

It’s an odd kind of clarity, but Erik understands. So now they’re here. Ianto Rent Forget. Ruin. The Desperate Man. Title: The Desperate ManSeries: InceptionPairing: Arthur/Eames; short mention of Cobb/ArthurRating: NC-17Length: ~4,000Warnings: Totally unbeta’ed – mistakes are mine.Summary: “Forget your boyfriend and meet me at the hotel room.”Disclaimer: Somewhere over the slash rainbow of my mind, it happened.

But not in Kansas, unfortunately.A/N: carouselcycles made me finish this, which was sitting in my folder for a good six+ months. Bless. The lonely clack of the final case locking beneath Arthur’s capable fingers is more final than the kick of a bullet to the brain. For everyone but Arthur, it signals the conclusion to another long day; the allowance of relaxing minds and muscles. And for Arthur – well. “My count was one PASIV short.” “Yeah, well,” is all Cobb mutters, as he reflexively grips the nape of his stiff neck. An impeccable persona does not a perfect person make. Will I see you tonight? Arthur admires the man to a fault. And shit, he says it anyway. Five_ht: Eames the Oversexed, Emotionally Stunted Manchild. Eleveninches posted about a kink meme prompt (which I will find later [ETA: over here]) about Eames and Arthur having a threesome and Eames getting so jealous he can't stand it.

Or something. That's what I wrote, anyway. Rentboy wip. Anybody with a heart votes love. By the Book. Arthur/Other Noncon. Arthur Subs for Job. Dom/Eames/Arthur Tentacles. Hurt. House of Cocks. Choke. * * * Round 1 is now closed to new prompts. * * * The Inception Anonymous Kink Meme Prompt Post No. 1 is now open. 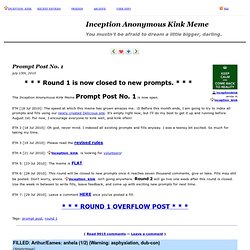