‘We are facing extermination’: Brazil losing a generation of indigenous leaders to Covid-19. When Bep Karoti Xikrin fell ill with Covid-19, he refused to go to a hospital. 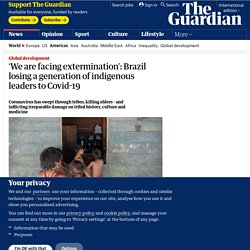 The 64-year-old chief of a Xikrin indigenous village in Brazil’s Amazon was plagued by headaches and fatigue and struggled for breath. But according to his daughter Bekuoi Raquel, he was afraid that if he were admitted to hospital he might never return. Instead, he died in his village – and with him, was lost decades of knowledge and leadership.

“He knew so much about things we haven’t even experienced,” said Bekuoi, 21. “Everyone admired him. A Dangerous Job at the Highest Point on Earth. Brazil’s Far Right Leader Threatens Amazon, One Tribe Pushes Back 2x. Search for Inca 'lost city' in Amazon may endanger indigenous people. A French writer and adventurer plans to explore one of the most remote parts of the Peruvian Amazon in search of a "lost" or "secret city" that may have been built by the Incas, but there are fears that the expedition could endanger the health of isolated tribes that have never been exposed to common human diseases. 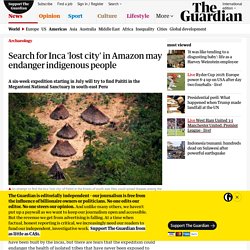 Thierry Jamin believes that the city, which he calls "Paititi", could lie somewhere in a 215,000-hectare protected area called the Megantoni National Sanctuary in the Cuzco region of south-east Peru. Peru’s last Inca city reveals its secrets: ‘It’s genuinely a marvel’ Jorge Cobos follows the remnants of an Inca road down the eastern slopes of Peru’s Andes, through cloud forest and over swaying plank bridges, edging along narrow paths beside sheer drops. 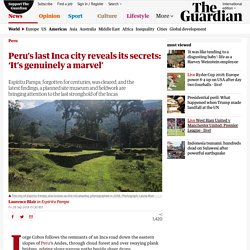 Finally, after a four-day trek, he clears a patch of undergrowth with his machete, revealing a moss-covered wall. Thick roots are entwined around fallen lintels. Indigenous people are left poor as tech world takes lithium from under their feet - Washington Post. Brazil: measles outbreak that infected 500 may devastate indigenous people.

An outbreak of measles that has infected nearly 500 people in northern Brazil could prove catastrophic for indigenous Yanomami people in remote areas along the Venezuelan border who are not protected from the disease, according to the not-for-profit group Survival, which warned that hundreds could be killed if emergency action was not taken. 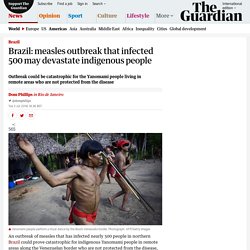 “This disease is a potentially devastating one,” said Jonathan Mazower, Survival’s communications director. “It is extremely likely that people will die unless medical care is provided urgently and it is very likely that people in the forest have already died.” The World Health Organization declared the Americas free of measles in 2016, but outbreaks can still occur when the disease is imported by visitors. TED-Ed - It was the western hemisphere's largest empire... Ancient Maya 101 Click 2x. Lines and Geoglyphs of Nasca and Pampas de Jumana. Lines and Geoglyphs of Nasca and Palpa Located in the arid Peruvian coastal plain, some 400 km south of Lima, the geoglyphs of Nasca and the pampas of Jumana cover about 450 km2 . 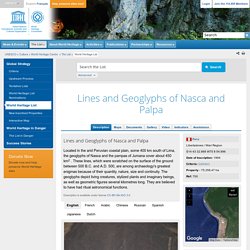 Remote Amazon tribe hit by mercury crisis, leaked report says. An indigenous people living in one of the remotest parts of the Peruvian Amazon has been struck by a mystery mercury epidemic, according to an unpublished Health Ministry report dated 2015 and 2017 seen by the Guardian. 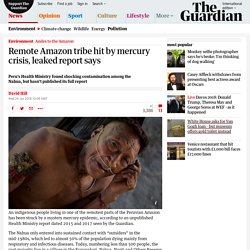 The Nahua only entered into sustained contact with “outsiders” in the mid-1980s, which led to almost 50% of the population dying mainly from respiratory and infectious diseases. Today, numbering less than 500 people, the vast majority live in a village in the Kugapakori, Nahua, Nanti and Others Reserve established for indigenous peoples in “voluntary isolation” and “initial contact” in south-east Peru. Between then and September 2015, a series of visits to the Nahua’s village, Santa Rosa de Serjali, were made by national and regional government health authorities. More than 150 urine samples - 41% of the Nahua population - were taken: 78% contained “high levels of mercury”, with “no significant differences” across age groups, women and men, or adults and children. Indigenous peoples in Latin America - a general overview. Udskriv There are approximately 40,000,000 people in Latin America and the Caribbean that belong to the almost 600 indigenous peoples of the continent, many of whom are in Mexico, Peru, Guatemala, Bolivia and Ecuador. 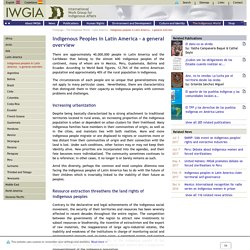 According to World Bank figures, 12.76% of the entire American population and approximately 40% of the rural population is indigenous. The circumstances of each people are so unique that generalizations may not apply to many particular cases. Nevertheless, there are characteristics that distinguish them in their capacity as indigenous peoples with common problems and challenges. Increasing urbanization. Latin America. Ancient America (Inca, Maya, Aztec) Machu Picchu 101. 6,000-year-old fabric reveals Peruvians were dyeing textiles with indigo long before Egyptians. Take a good look at the piece of cloth pictured at the top of this story. 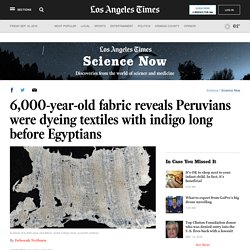 That was made 6,000 years ago by people living on the coast of Peru. Now check out those faint blue lines running through it. Yes, they’re washed out, but you can still see them. An Isolated Tribe Emerges from the Rain Forest. Before Nicolás (Shaco) Flores was killed, deep in the Peruvian rain forest, he had spent decades reaching out to the mysterious people called the Mashco Piro. 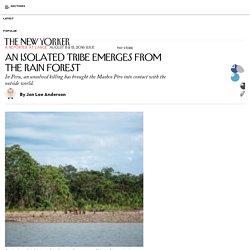 Flores lived in the Madre de Dios region—a vast jungle surrounded by an even vaster wilderness, frequented mostly by illegal loggers, miners, narco-traffickers, and a few adventurers. For more than a hundred years, the Mashco had lived in almost complete isolation; there were rare sightings, but they were often indistinguishable from backwoods folklore. Sarayaku: People of the Zenith. "When others have surrendered, Sarayaku will not back down. 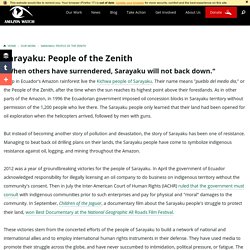 " Deep in Ecuador's Amazon rainforest live the Kichwa people of Sarayaku. HOW TO LET GO OF THE WORLD AND LOVE ALL THE THINGS CLIMATE CAN'T CHANGE trailer. Peru: Mercury poisoning “epidemic” sweeps tribe. A huge proportion of the Nahua tribe have been affected by the poisoning, which causes anemia and acute kidney problems © Johan Wildhagen Up to 80% of a recently-contacted tribe in Peru have been poisoned with mercury, raising serious concerns for the future of the tribe. One child has already died displaying symptoms consistent with mercury poisoning. Olmec. The ancient Olmec Civilization. The ancient Olmec civilization is now considered to be one of the earliest great civilizations in Mesoamerica.

This civilization came and went long before the Aztec empire was even thought of, and yet they left their mark on the peoples of Mexico and beyond, and developed a complex culture which is still echoed today, probably in ways we don't yet even realize. (See this possible timeline including the Olmec and Aztec civilizations) The basics The ancient Olmec civilization is believed to have been centred around the southern Gulf Coast of Mexico area (today the states of Veracruz and Tabasco) - further south east than the heart of the Aztec empire. Ancient Olmec Trade and Economy. Ancient Olmec Trade and Economy: The Olmec culture thrived in the humid lowlands of Mexico's gulf coast from about 1200-400 B.C. They were great artists and talented engineers who had a complex religion and worldview. Although much information about the Olmecs has been lost to time, archaeologists have succeeded in learning much about their culture from several excavations in and around the Olmec homeland.

Among the interesting things they have learned is the fact that the Olmec were diligent traders who had many contacts with contemporary Mesoamerican civilizations. Mesoamerican Trade before the Olmec: By 1200 B.C., the people of Mesoamerica – present-day Mexico and Central America – were developing a series of complex societies. Olmecs. Two Indigenous Solar Engineers Changed Their Village in Chile. Liliana Terán, left, and her cousin Luisa, members of the Atacameño indigenous people, are grassroots solar engineers trained at the Barefoot College in northwest India. By installing solar panels in their northern Chilean village, Caspana, they have changed their own lives and those of their fellow villagers. (Photo: Marianela Jarroud/IPS) Liliana and Luisa Terán, two indigenous women from northern Chile who travelled to India for training in installing solar panels, have not only changed their own future but that of Caspana, their remote village nestled in a stunning valley in the Atacama desert.

"It was hard for people to accept what we learned in India," Liliana Terán told IPS. Isolated tribespeople receiving care after violent contact in Brazil. In the wake of several encounters, Brazilian government workers are tending to 21 formerly isolated Korubo people in a remote corner of the Brazilian Amazon. A recent statement by the National Indian Foundation (FUNAI), the Brazilian agency charged with protecting indigenous peoples, reports that settled Matis villagers had attacked Korubo last December, leaving at least eight dead.

Cultures and peoples of South America. This is What Michael Jackson Sounds Like in Quechua. Even the youngs think Quechua is cool. After the language was translated for a book, a song, and given a shoutout by a fútbolero, we started thinking that Quechua was having a sort of moment. Researchers confirm: The Largest Pyramid in Mexico has been found. Incas. Incas. For Inca Road Builders, Extreme Terrain Was No Obstacle : Parallels. The Inca were innovators in agriculture as well as engineering. Terracing like this, on a steep hillside in Peru's Colca Canyon, helped them grow food. Doug McMains/Smithsonian National Museum of the American Indian hide caption itoggle caption Doug McMains/Smithsonian National Museum of the American Indian. Tarlton Law Library - Aztec and Maya Law - online exhibit.

The Aztec empire was made up of a series of city-states known as altepetl. Nahuatl (Aztec) Family. DEATH WHISTLE. Yanomami Tribes Amazon 2015.