Arctic stronghold of world’s seeds flooded after permafrost melts. It was designed as an impregnable deep-freeze to protect the world’s most precious seeds from any global disaster and ensure humanity’s food supply forever. 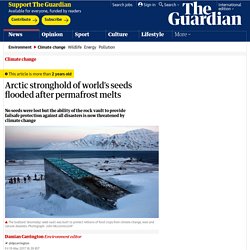 The World Passes 400 PPM Threshold. Permanently. In the centuries to come, history books will likely look back on September 2016 as a major milestone for the world’s climate. 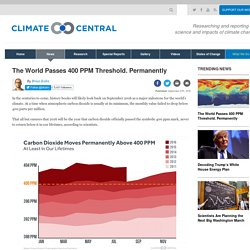 At a time when atmospheric carbon dioxide is usually at its minimum, the monthly value failed to drop below 400 parts per million. That all but ensures that 2016 will be the year that carbon dioxide officially passed the symbolic 400 ppm mark, never to return below it in our lifetimes, according to scientists. 13 devastating photos to show your friend who doesn't believe in climate change. Human activity is affecting our planet. 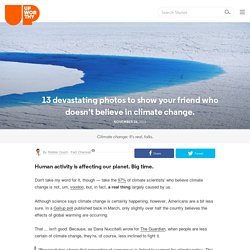 Big time. Don't take my word for it, though — take the 97% of climate scientists' who believe climate change is not, um, voodoo, but, in fact, a real thing largely caused by us. Although science says climate change is certainly happening, however, Americans are a bit less sure. In a Gallup poll published back in March, only slightly over half the country believes the effects of global warming are occurring. That ... isn't good. "Research has shown that perception of consensus is linked to support for climate policy. Arctic Sea Ice Sets New Record Low For This Time Of Year. Last year it was reported that the Arctic is warming twice as fast as anywhere else in the world, and as the region heats up, the ice continues to melt. 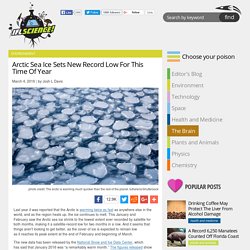 This January and February saw the Arctic sea ice shrink to the lowest extent ever recorded by satellite for both months, making it a satellite-record low for two months in a row. And it seems that things aren't looking to get better, as the cover of ice is expected to remain low as it reaches its peak extent at the end of February and beginning of March. The new data has been released by the National Snow and Ice Data Center, which has said that January 2016 was “a remarkably warm month.” The figures released show how sea ice cover averaged 13.5 million square kilometers (5.2 million square miles) for this month, which is 1.04 million square kilometers (402,000 square miles) less than the 1981 to 2010 average. It is also 90,000 square kilometers (35,000 square miles) below the previous record January low, which happened in 2011. The remote Alaskan village that needs to be relocated due to climate change. KIVALINA, ALASKA — This tiny and isolated town of 400 cannot be reached by road. 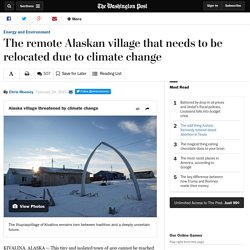 It lies on a fragile barrier island along the Chukchi Sea, 83 miles above the Arctic circle. And for generations, the Iñupiat people of the region have hunted gigantic bowhead whales from camps atop the sea ice that stretches out from the town’s icy shores. But in recent years, climate change has thinned the ice so much that it has become too dangerous to hunt the whales. Soon, the U.S. government says, it may be too dangerous to live here at all, with less sea ice to protect the barrier island from powerful waves that wash across the village. “Global warming has caused us so much problems,” said Joseph Swan, Sr., a Kivalina elder, at a town meeting last week. See an American town that's about to be completely lost to climate change. The Jean Charles band of Biloxi-Chitimacha-Choctaw have lived in the same place for more than 200 years. 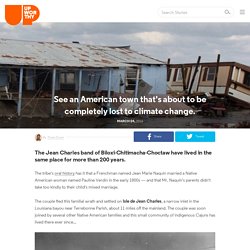 The tribe's oral history has it that a Frenchman named Jean Marie Naquin married a Native American woman named Pauline Verdin in the early 1800s — and that Mr. Naquin's parents didn't take too kindly to their child's mixed marriage. Framtidskatastrofen är här. Are We Falling Off the Climate Precipice? Scientists Consider Extinction. 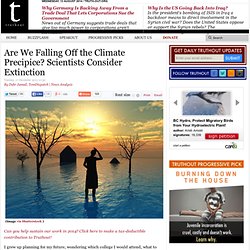 Climatologist Says Arctic Carbon Release Could Mean “We're Fucked” Scientists Think They May Have Solved The Siberian Crater Mystery. 5 Scary Effects Of Climate Change That Could Happen In Your Lifetime. Just what is going on in this climate of ours? Rising Seas. While seas are rising globally, the phenomenon is not occurring at even rates around the world. 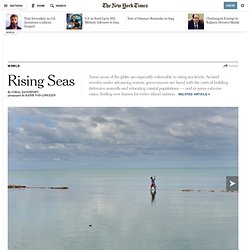 A 2012 study by the U.S. Geological Survey concluded that sea levels along the East Coast will rise three to four times faster than the global average over the next century. While levels worldwide are expected to rise an average of two to three feet by 2100, they could surge more than six feet along the Atlantic seaboard. The study named Boston, New York, and Norfolk, Va., as the three most vulnerable metropolitan areas. Another study found that just a 1.5-foot rise in sea level would expose about $6 trillion worth of property to coastal flooding in the Baltimore, Boston, New York, Philadelphia and Providence, R.I., areas. Miami, one of the nation’s most populous cities, is built atop a porous limestone foundation on the South Florida coast, making it extremely vulnerable to rising sea levels, according to the federal government’s 2013 draft National Climate Assessment. 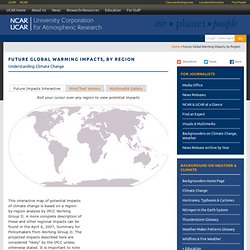 Climate Change & the Global Conveyor Belt. Climate Change Will Probably Ruin These 9 Delicious Foods By 2050, So Brace Yourselves. One Guy With A Marker Just Made The Global Warming Debate Completely Obsolete. Rising Seas - Interactive: If All The Ice Melted.