When Will Climate Change Make the Earth Too Hot For Humans? 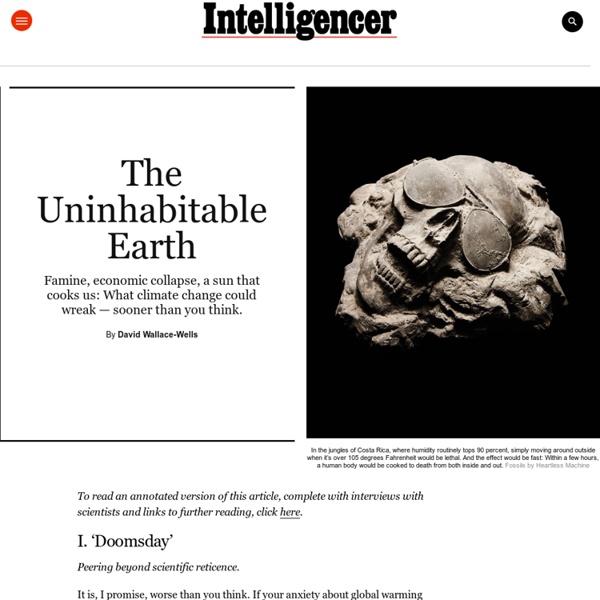 To read an annotated version of this article, complete with interviews with scientists and links to further reading, click here. Peering beyond scientific reticence. It is, I promise, worse than you think. If your anxiety about global warming is dominated by fears of sea-level rise, you are barely scratching the surface of what terrors are possible, even within the lifetime of a teenager today. And yet the swelling seas — and the cities they will drown — have so dominated the picture of global warming, and so overwhelmed our capacity for climate panic, that they have occluded our perception of other threats, many much closer at hand. Rising oceans are bad, in fact very bad; but fleeing the coastline will not be enough. Indeed, absent a significant adjustment to how billions of humans conduct their lives, parts of the Earth will likely become close to uninhabitable, and other parts horrifically inhospitable, as soon as the end of this century. The bahraining of New York. It is.

We Have Five Years To Save Ourselves From Climate Change, Harvard Scientist Says Carbon pollution is rapidly forcing the climate back to a state last seen in the Eocene Epoch, when there was no ice on the poles, warned James Anderson, the Harvard scientist known for linking CFCs to erosion of the Ozone Layer. Shutterstock The level of carbon now in the atmosphere hasn't been seen in 12 million years, a Harvard scientist said in Chicago Thursday, and this pollution is rapidly pushing the climate back to its state in the Eocene Epoch, more than 33 million years ago, when there was no ice on either pole. "We have exquisite information about what that state is, because we have a paleo record going back millions of years, when the earth had no ice at either pole. There was almost no temperature difference between the equator and the pole," said James Anderson, a Harvard University professor of atmospheric chemistry best known for establishing that chlorofluorocarbons were damaging the Ozone Layer.

Aside from Damaging Our Health, Smoking Also Harms the Environment The tobacco industry’s carbon footprint is greater than that of entire countries, such as Israel or Peru. Tobacco’s disastrous effects on human health have been clear for decades, despite industry giants trying to hide the evidence linking cigarette smoke and disease for as long as possible. Despite Big Tobacco’s machinations, countless public awareness campaigns have exposed the drug’s role in causing lung cancer and numerous other serious conditions. Legislation around the world has slowly chipped away at the once-dominant addiction: Smoking prevalence has decreased by more than half in some developed countries since 1980 and continues to decline. This progress has substantially contributed to cancer prevention efforts.

Protect Your Library the Medieval Way, With Horrifying Book Curses In the Middle Ages, creating a book could take years. A scribe would bend over his copy table, illuminated only by natural light—candles were too big a risk to the books—and spend hours each day forming letters, by hand, careful never to make an error. To be a copyist, wrote one scribe, was painful: “It extinguishes the light from the eyes, it bends the back, it crushes the viscera and the ribs, it brings forth pain to the kidneys, and weariness to the whole body.” Given the extreme effort that went into creating books, scribes and book owners had a real incentive to protect their work. They used the only power they had: words. At the beginning or the end of books, scribes and book owners would write dramatic curses threatening thieves with pain and suffering if they were to steal or damage these treasures.

A Year of Deep Adaptation « Professor Jem Bendell One year ago this month, our Institute at the University of Cumbria released my paper on Deep Adaptation to our climate tragedy. It has since been downloaded over half a million times, been translated into many languages, inspired Facebook groups (one with over 4000 people), many events, and been credited by commentators and activists as helping the Extinction Rebellion movement. Not bad for what one journalist suggested to me was a “career suicide note.” Over the past year I have sought to do what I could to channel the shock, anger, fear, despair, and passion of so many people who got in touch with me, into networks of solidarity, contemplation, inquiry and action. That has included the launch of the Deep Adaptation Forum for people who want to work through what this means for their day jobs – or whether to quit. I have also sought to provide some ideas and guidance via writings, talks, interviews, retreats, contemplative practices and videos.

Cost of cigarettes must rise to reflect environmental damage from tobacco industry, WHO says The price of a packet of cigarettes should rise to reflect the wide-ranging environmental damage caused by the tobacco industry, from deforestation to water pollution, a major report has recommended. Backed by the World Health Organisation (WHO), the study found the industry’s carbon footprint was comparable to entire countries. Tobacco farms accounted for the loss of around 5 per cent of forests in parts of Asia and Africa, it stated. The UK was among the countries singled out for criticism along with several other western nations which were condemned for “literally burning poorer countries’ resources”.

One climate crisis disaster happening every week, UN warns Climate crisis disasters are happening at the rate of one a week, though most draw little international attention and work is urgently needed to prepare developing countries for the profound impacts, the UN has warned. Catastrophes such as cyclones Idai and Kenneth in Mozambique and the drought afflicting India make headlines around the world. But large numbers of “lower impact events” that are causing death, displacement and suffering are occurring much faster than predicted, said Mami Mizutori, the UN secretary-general’s special representative on disaster risk reduction.

Tobacco control, a ‘major component’ of environmental protection efforts – UN health official The World Health Organization Framework Convention on Tobacco Control (WHO FCTC), which is celebrating the 15th anniversary of it being adopted this year – is a global health treaty that advocates for the control of tobacco production, sale and use, as a way of reducing tobacco-related illnesses, deaths, environmental degradation and poverty across the world. “People often immediately think of the health impact that tobacco has, but there is not enough awareness of how tremendously destructive it is for the environment too, on land, under water and in the air,” said Dr. Vera Luiza da Costa e Silva, the Head of the WHO FCTC Secretariat. “Studies indicate that tobacco growing could be up to 10 times more aggressive than all other deforestation factors,” Dr. da Costa e Silva noted. Governments need to understand that tobacco control is a major component of any effective and holistic environmental protection effort - Dr. Vera Luiza da Costa e Silva, WHO FCTC Secretariat chief

What Cringing at Your Own Voice Reveals About You So you hate the sound of your own voice. This complaint has become something of a cliché, perhaps especially on media Twitter, in that journalists routinely confess that they are procrastinating an interview transcription because hearing their own recorded voice is so unbearable. And yet of course the hatred itself existed long before Twitter; studies dating back to the 1960s have demonstrated that people dislike hearing recordings of their own voices, whereas listening to playbacks of friends’ or strangers’ voices didn’t bother them. It’s something about hearing you, in other words, that you specifically find cringeworthy. Climate change is affecting crop yields and reducing global food supplies Farmers are used to dealing with weather, but climate change is making it harder by altering temperature and rainfall patterns, as in this year’s unusually cool and wet spring in the central U.S. In a recently published study, I worked with other scientists to see whether climate change was measurably affecting crop productivity and global food security. To analyze these questions, a team of researchers led by the University of Minnesota’s Institute on the Environment spent four years collecting information on crop productivity from around the world. We focused on the top 10 global crops that provide the bulk of consumable food calories: Maize (corn), rice, wheat, soybeans, oil palm, sugarcane, barley, rapeseed (canola), cassava and sorghum.

Is inequality bad for the environment? That equality matters in terms of health and happiness has been clear for some years. But it is also better for the environment. The evidence (which is still emerging) suggests the most unequal affluent countries contribute more to climate change via pollution than their more equal counterparts. A large section of their people may suffer more, too. A new report predicts the United States will see its levels of economic inequality increase due to the uneven geographical effects of climate change – resulting in “the largest transfer of wealth from the poor to the rich in the country’s history”, according the study’s lead author. In a 2016 report, Oxfam found that the greatest polluters of all were the most affluent 10% of US households: each emitted, on average, 50 tonnes of CO2 per household member per year.

What happens to the unprotected human body in space? It's a recurring horror in sci-fi: the hull is pierced, a human is trapped without equipment in an airlock about to open, a door needs to be opened in order to expel something undesirable. With no air and almost zero pressure, the human body isn't going to last long without some form of protection. But what does happen, exactly? Do your eyes explode outward while your blood evaporates? Well, no.