Do not drink too much before going to bed. What Are The Health Benefits Of Barley Tea? Individuals interested in beverages with therapeutic properties may be intrigued by roasted barley tea, known in Japanese as mugicha or in Korean as boricha. 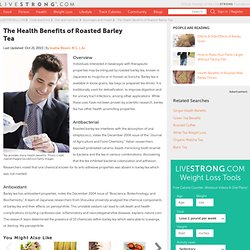 Barley tea is available in loose grains, tea bags or prepared tea drinks. It is traditionally used for detoxification, to improve digestion and for urinary tract infections, among other applications. While these uses have not been proven by scientific research, barley tea has other health-promoting properties. Roasted barley tea interferes with the absorption of oral streptococci, states the December 2006 issue of the "Journal of Agriculture and Food Chemistry. " Italian researchers exposed pretreated ceramic beads mimicking tooth enamel to bacteria and the tea in various combinations, discovering that the tea inhibited bacterial colonization and adhesion. Barley tea has antioxidant properties, notes the December 2004 issue of "Bioscience, Biotechnology, and Biochemistry. " Hot Almond Milk, Nutmeg and Cinnamon for Sleepy Nights - Bohemian Kate. So the other day when I was down at the Ranch, I had a chance to speak with our Ayurvedic specialist, Carla Levy, for a blog post I will be doing for Rancho La Puerta. 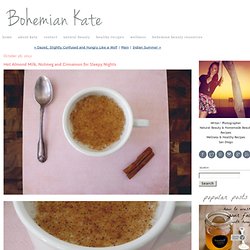 For those of you who don't know what Ayurveda is, it's an ancient medicine system from India. I honestly don't know much about it, but basically it's about keeping your body balanced to prevent disease. I had a little mini consultation and the subject of sleeping came up. I told her that I am not that great of a sleeper. I can fall asleep pretty easily, but most of the time I don't seem to get that deep deep sleep.

So I did it the night I got back from Mexico and surprisingly, it tasted really good and holy ****, it worked! I don't know if this will work for everyone because we're all different according to Ayurveda, but if you're having trouble sleeping, just give it a try. K, ya'll, yup, it's summer here again in San Diego. Any plans this weekend ;) xoxo...Kate. What Are the Side Effects of Goji Juice. Goji berries are used to make goji juice As with many exotic fruit beverages, many people are wondering "What are the side effects of goji juice? 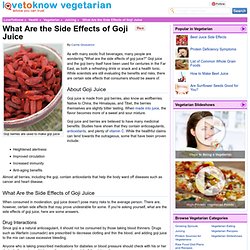 " Goji juice and the goji berry itself have been used for centuries in the Far East, as both a refreshing drink or snack and a health tonic. While scientists are still evaluating the benefits and risks, there are certain side effects that consumers should be aware of. About Goji Juice Goji juice is made from goji berries, also know as wolfberries. Goji juice and berries are believed to have many medicinal benefits. Heightened alertnessImproved circulationIncreased immunityAnti-aging benefits Almost all berries, including the goji, contain antioxidants that help the body ward off diseases such as cancer and heart disease. What Are the Side Effects of Goji Juice When consumed in moderation, goji juice doesn't pose many risks to the average person.

Drug Interactions Disruptions in Sleep Patterns Pollen Allergies Pregnant Women. Cherry juice can help get a good night's sleep. During the study the participants wore an actigraphy watch sensor which monitored their sleep and wake cycles and kept a daily diary on their sleeping patterns. 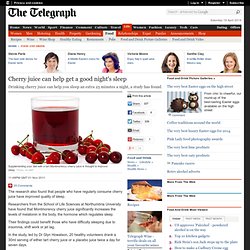 The researchers found that when participants drank cherry juice for a week there was a significant increase in their urinary melatonin (15-16%) than the control condition and placebo drink samples. The actigraphy measurements of participants who consumed the cherry juice saw an increase of around 15 minutes to the time spent in bed, 25 minutes in their total sleep time and a 5-6% increase in their â€˜sleep efficiency', a global measure of sleep quality. Cherry juice drinkers reported less daytime napping time compared to their normal sleeping habits before the study and the napping times of the placebo group. Dr Howatson, an exercise physiologist, said: "We were initially interested in the application of tart cherries in recovery from strenuous exercise. How to Use Tea as a Sleep Aid. Beer Braised Chicken Tacos with IPA Avocado Cream and Beer Corn Tortillas Let’s be honest. 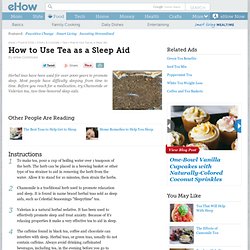 In America we tend to celebrate Cinco de Mayo the same way we celebrate St. Patricks day: with friends, beer and an incomplete understanding of another nation’s holiday. I might not be able to help you with … Three-Ingredient Salted Chocolate Matzos I don’t come from a very traditional Jewish family, but I still have fond childhood memories of seeing my extended family at Passover seders.