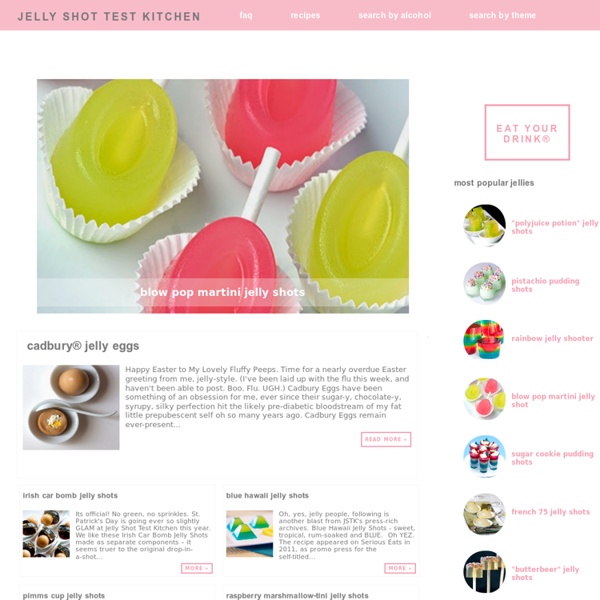 A Very Merry Round-up - Jelly Shots of Holidays Past! OMG. Hello. Happy Holidays. Have missed you all - what a crazy year it's been. I had the best of intentions about getting posts back to weekly this year.

The Original Caramel Apple Jello Shots [With Real Apples] Can you believe I actually spend time trying to figure out what kinds of food could be used as a vessel for jello shots? I'm not a lush I swear ... although my blog would have you totally fooled. It's just that, after filling lemons, limes, oranges and strawberries with vodka infused jello, I knew there had to be something else ...

How to Make Caramel Apple Shots Photo: Michelle Oddis Once in a while, a party trick comes along that grabs our attention. Food blogger Michelle Oddis of That's So Michelle loves making caramel apple shots we can't imagine anyone would turn down. Using, wait for it, real fruit and time-tested formulas for tasty, jiggly shots that stay put in their edible "shotglasses," Michelle's gotten Food Republic on the gimmicky Halloween bandwagon we've been resisting so fiercely.

10 dreamy dining destinations The White Barn Inn in Kennebunkport, ME (Photo: Courtsy of the White Barn Inn) By now, the word is out that Manhattan’s River Café is the perfect place for a marriage proposal, and that the French Laundry is the place to go in the Napa Valley. Dig a bit deeper, however, and romantic restaurants can be found almost everywhere, with marvelous menus combining with a lovely sense of place. Here are some ideas from every corner of the country. The White Barn Inn, Kennebunkport, MEFor ultra-luxury “Down East” Kennebunkport is arguably the most posh address in Maine. Smoretini Shooters Me again. Here to convince you that you need yet another trendy, insanely-flavored bottle of booze. I do what I can.

BIG Bar Big city, big views, big drinks. Come see our newly renovated BIG Bar and bring a BIG appetite – where everything is maximized in size. From BIG’s Burger to the Nachos Grande, you’ll never leave hungry! Modern Drunkard Magazine 1. If you owe someone money, always pay them back in a bar. Preferably during happy hour. 2. Always toast before doing a shot. 3.

Roscoe's House of Chicken and Waffles Roscoe's on Pico Blvd. Roscoe's House of Chicken and Waffles is a Hollywood, California-based soul food restaurant chain founded by Herb Hudson, a Harlem native, in 1975. It is best known, as the name states, for serving chicken and waffles, both together and separately, although they do offer more traditional menu items as well. Soon after it was opened, Hudson had friends in Motown and television such as Natalie Cole spread the word to other celebrities; Redd Foxx would tell his audience that he went there.[1] The Los Angeles Times refers to Roscoe's as "such an L.A. institution that people don't even question the strange combo anymore.

10 Best Sexual Drinking Games Some of the best sexual drinking games can be done either in an intimate setting with only you and your girlfriend or you can make it a party and have multiple people. The ten most commonly played sexual drinking games are: Nine cans of beer or the floor. In this game you will need about nine cans of beer per person, (NOTE: not everyone will finish this game) a shot glass and a time keeper. Every minute for 100 minutes you take a shot of beer.